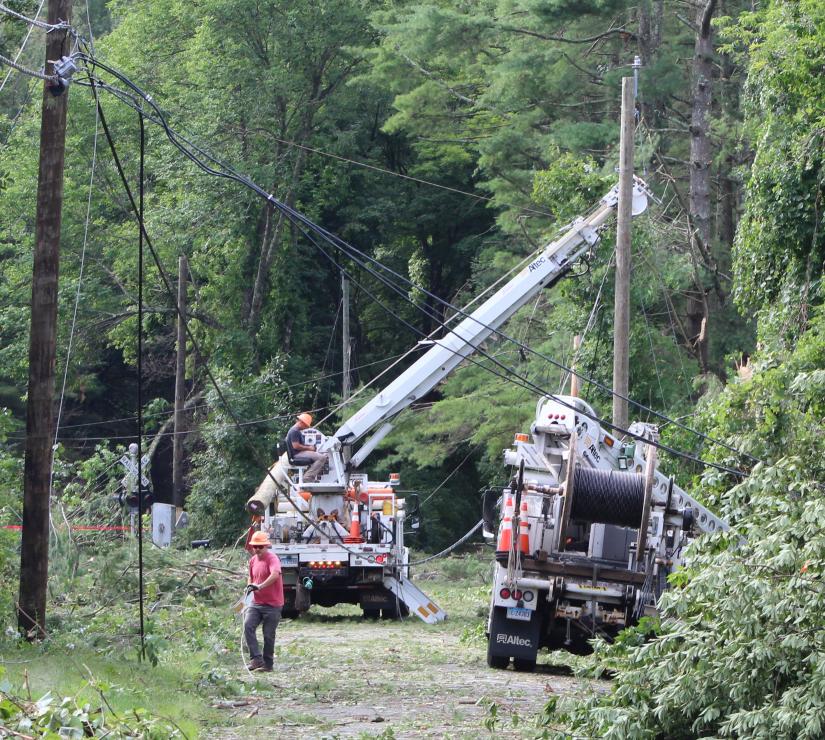 Even before Isaias, a tornado hit the Northwest Corner

August 6, 2020
By
By Cynthia Hochswender

There were no reported human casualties from the tornado that came down in the Northwest Corner on Sunday evening, Aug. 2. But a beef cow in the Lime Rock Station section of Falls Village was killed after it was crushed by a falling tree.

Lime Rock Station is a small side road at the edge of Falls Village, along the banks of the Housatonic River and steps away from the hamlet of Lime Rock in Salisbury. Railroad tracks run through it. It was one of the handful of areas that felt the bite of the early evening tornado.

Another area that reported heavy damage was Route 343 in Sharon, just before the border with Amenia, N.Y., where the tornado landed on Paley’s Farm Market and farm. For a story on the extent of the damage there, see the story and photos on Page A1.

Sunday evening’s tornado was an advance warning of what were expected to be even heavier rains and wind gusts on Tuesday and Wednesday, Aug. 4 and 5 (after this issue of The Lakeville Journal went to press), as Tropical Storm Isaias swept up the East Coast.

Most parts of the Northwest Corner had heavy rain, rumbling thunder and some winds on Sunday night.

At Lime Rock Station Road, resident Katy Keller said, “White caps whipped up on the river, sheets of rain came barreling in, dark clouds leapt up from behind the mountain, forming into a funnel. The tornado took a swipe at lifting our Broil King barbecue and then ripped out some power lines and poles.

“The tornado then took a swing northeast and wiped out dozens of 100-foot pines in a path up through Barrack Mountain.

“A beautiful black cow was crushed to death. The tornado sounded like a derailed freight train.”

Her husband, Colter Rule, added more details: “We were sitting down to an early supper and looked over at Sharon Mountain from our glass porch and said, ‘Oh my gosh, there must be a fire over the mountain.’

“We went outside and watched all this smoky kind of fog debris. I mean, it was just a maelstrom. And then five minutes later it came over the mountain, the wind built like crazy and everything was flying around. We started to shelter a little bit but stayed inside and then all hell broke loose. We could hear trees snapping; probably 50 100-foot-plus white pines were creamed. Luckily no houses were hit, although some trees fell between houses and garages. My neighbor Jeff Bauman lost a whole forest of white pines.

“Bob Anderson across the road lost a ton of trees, and his cow was killed.

“The power company and the town crew started work shortly thereafter and we were cut out by this morning. It was pretty, pretty, pretty wild.”

Falls Village First Selectman Henry Todd confirmed on Monday morning that nobody was injured during the storm. He said a shed was damaged, and a hot tub. He also noted that a cow was injured and then had to be put down.

First Selectman Curtis Rand said Monday afternoon that he was unaware of any damage in town from Sunday’s storm, although more than 200 town residents lost power.

In addition to destroying greenhouses at Paley’s Farm, the tornado touched down at other farms including Joe Church’s farm on Gavel Cabin Road off White Hollow Road and the Wike Brothers’ Farm, a little farther away on White Hollow.

Warnings had been received from the state as the storm approached. Town officials were quick to coordinate with Eversource power company crews to restore power. The town crew responded immediately throughout the town after the early evening tornado, ensuring residents’ safety from downed wires and the many fallen trees and branches.