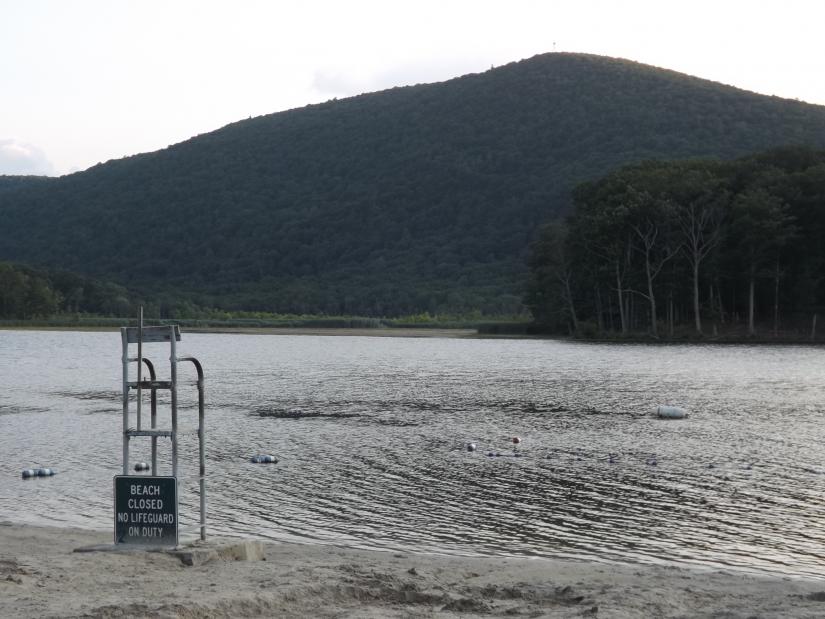 Captured in the evening hours, Stissing Lake in Pine Plains is a popular spot during the summer months. However, the increased goose population at the lake in recent years has left so many droppings that increased bacteria levels in the water often causes problems. Photo by Kaitlin Lyle

Town culls geese to deal with bacteria at Stissing Lake

PINE PLAINS — Taking action as part of the town’s ongoing battle with nature, Pine Plains officials were given crucial advice from Ken Preusser, a lake expert from the United States Department of Agriculture (USDA), on how to reduce the goose population at Stissing Lake to ensure the beach can stay open this summer.

Calling this a “many pronged effort,” Pine Plains town Supervisor Darrah Cloud said the town has tried “every single other way” to address the increased goose population at the beach over the years, including setting up wind flags, installing a fence and extending beach hours to bring more people onto the beach.

Yet the geese have managed to overcome such measures to lower their numbers, from jumping over the wind flags to pushing down the fences with their body weight. To date, Cloud said Pine Plains has four to five times the goose population that the lake can handle, so emergency measures were needed. Along with the bacteria issues caused by goose droppings on the beach, she said a lot of the geese tend to come back to their birth place (in this case, Stissing Lake) when they mature and start breeding.

Inviting Preusser this spring to give advice on how to deal with the geese, Cloud said he suggested the town do a goose cull, a practice used to reduce a wild animal population through selective slaughter. Cloud said the town was hesitant, but it felt the overpopulation of geese had become a critical health problem. So Presseur began taking population control measures to prevent the geese from continuing to make the lake their permanent home.

In addition to culling the geese by about 21, Presseur did a practice known as “oiling the eggs,” which he said involves finding a goose nest and putting oil on the eggs to prevent them from hatching, thereby reducing the number of future generations born.

The meat from the goose cull was donated to Willow Roots Food Pantry.

Preusser had been working steadily since April; the Pine Plains Beach opened to the public at the end of June. And while it’s about to close in the next week or so, Cloud said “she thinks they have a good plan going forward and hopefully more understanding from the Dutchess County Department of Health [DOH] as to how to correctly test the water.”

Dutchess County Assistant Executive Ron Hicks came to the beach with representatives from the Dutchess County Department of Health (DOH) to meet with Cloud, Councilman Matthew Zick, Recreation Director Michael Cooper  and Presseur on July 6 look into the problem.

What was discovered, said Cloud in an update on Tuesday, Aug. 17, was fascinating. Firstly, the cull worked, reducing goose numbers and droppings at the beach.

Secondly, a DOH representative who went on the lake in a boat to check things out, said the way the town has been testing the water at the beach has been incorrect.

The goose droppings didn’t help the situation but the testing needed to be done at the end of a dock. As there is no dock at the beach, the town had to conduct its testing at an approximated distance and location from the shoreline. The DOH representative found the water was very clean and the testing had been erroneous. Cloud said she doesn’t know what this means for the town because it’s “all in the hands of the DOH.” She said she does have the DOH’s recommendations and support.

The town wants to clean the beach and survey the situation next April. To that end, she said it will be inviting the USDA back next year, adding that Preusser will need to repeat the cull for three years before the beach notices a real impact.

Speaking at the July Town Board meeting, Presseur suggested the town get an inflatable “airman” to put on the beach at night as well as a solar air raider.

“It’s us versus the geese and nature is going to win,” Cloud said, “and possibly it should. The world belongs to nature. We’re battling something that is a force beyond our ultimate ability to win — nature will always win and we’re trying to keep it at bay for our kids for a while, but it’s hard to figure out how to work with it as opposed to against it, which is what we want. Ultimately, that’s what I want: to work with it instead of against it and get the geese to go someplace else.”