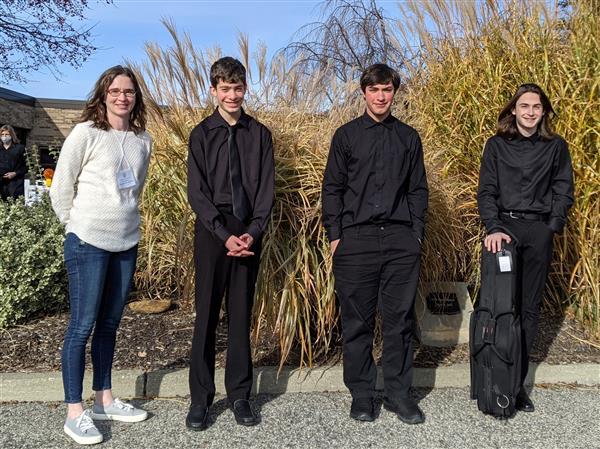 PINE PLAINS — The Pine Plains Central School District (PPCSD) was enlivened with the sound of music in November as four of its students were selected to participate in Area All State Band and Orchestra.

On the statewide level, Erin Marlow, a music teacher at Stissing Mountain Junior/Senior High School, said 2021 was Pine Plains’ 85th year participating in Area All State. Area All State competition was canceled in 2020 due to the COVID-19 pandemic.

Students were elected for Area All State based on their performance of a solo in which they demonstrated their vocal, orchestral or band abilities. Marlow said the students in the PPCSD performed a solo for an evaluation that took place earlier that May, and their performance scores were submitted to a committee representing Zone 10 of the New York State School Music Association (NYSSMA).

Zone 10 of NYSSMA includes Dutchess, Columbia and Putnam Counties. Once selected for Area All State, students are given the chance to compete against their peers from varying high school levels and musical abilities.

All sophomores at Stissing Mountain Junior/Senior High School, the four students selected in 2021 auditioned for band, including Max Heggenstellar on saxophone; Milo Francavilla on clarinet; Gabriel Hieter on percussion; and Sarah Griffin on French horn. Marlow said Sarah was accepted into Area All State Orchestra while Max, Milo and Gabriel were accepted into Area All State Band.

Following their acceptance, the four Stissing students worked with guest conductors from Ithaca College throughout the weekend of Nov. 19 to prepare the music they planned to perform in the Area All State Festival.

Their rehearsals later culminated in a concert performance held at Brewster High School on Saturday, Nov. 20, 2021.

It’s been two months since the students competed and Marlow said they’re now looking to audition for Conference All State this year in Rochester. She said the competition selects the top students in the entire state rather than just in Zone 10.

Considering last year was her first year as a high school band director, Marlow said being able to send students to Area All State was an eye-opening experience for her as well as for her students.

“It was a great learning experience for them as students and for me, because they’ve been my students since sixth grade,” she said. “They’ve been bitten by the bug and it was a big encouragement for them and they want to do All State [again].”