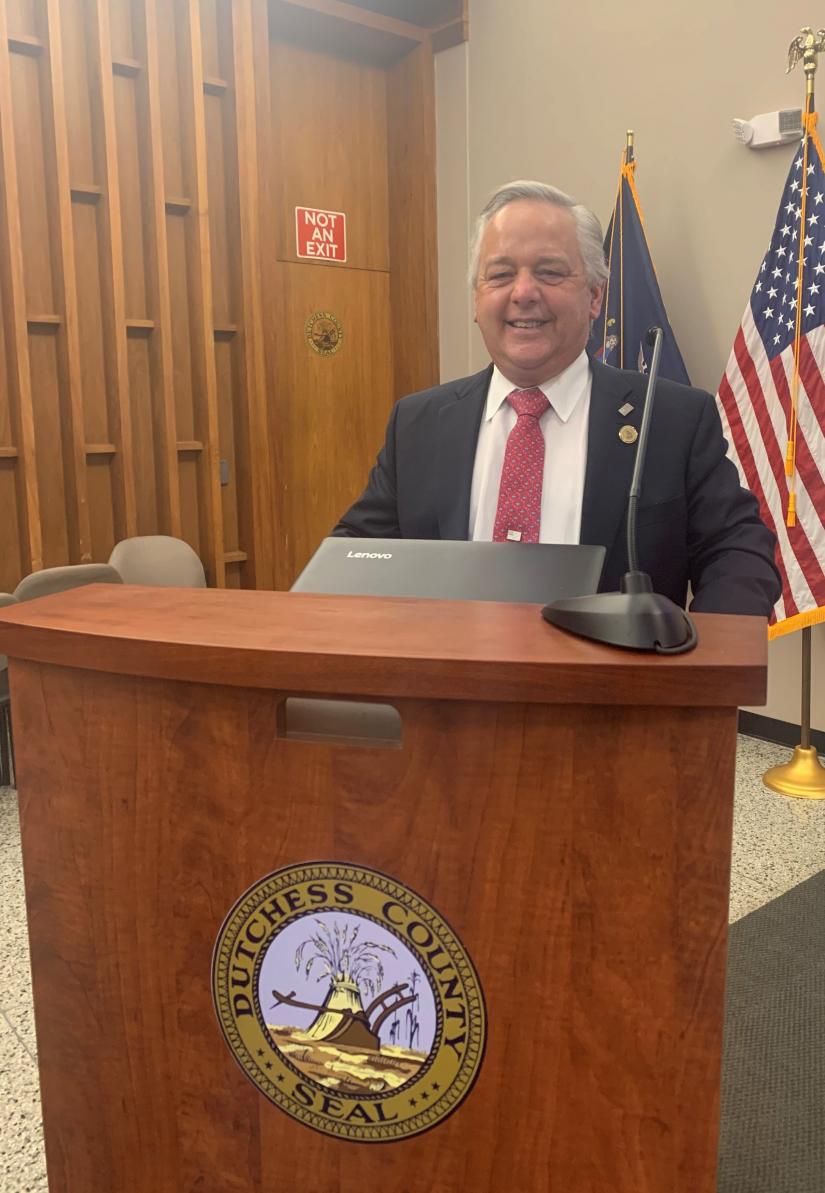 PINE PLAINS — Sometimes it’s easy to understand why certain politicians keep getting re-elected, not only by their constituents but by their colleagues. Such is the case with Pine Plains native and working farmer, Dutchess County Legislator A. Gregg Pulver (R-19), who was just re-elected to chair the Legislature for a fourth one-year term. Pulver’s easy going nature, his willingness to work across the aisle and his determination to get a job done once started have earned him many accolades during his many decades in public service.

“I like making a difference. I certainly love being a legislator, but as chair I have a lot more input in the process,” he said last week after being re-elected at the 2021 reorganizational meeting in Poughkeepsie on Jan. 4. “[Dutchess County Executive] Marc [Molinaro] and I get along well, so it adds to that conversation, and I think it’s important that as Gary Cooper was a past chairman before me and Harry Schroeder before him, I think it’s nice somebody from the northern part of the county, which is often forgotten in Poughkeepsie, is able to represent the county. I think it’s important. I like that we have a say here in the county.”

Northeastern Dutchess, especially his hometown of Pine Plains, appreciates the representation, said its town supervisor, Darrah Cloud. Although a Democrat, Cloud is a big fan of Republican Pulver. The two often work together.

“I am so proud to be able to work closely with our legislator, who has the confidence of the county executive and the Legislature,” she said. “Dutchess County is fortunate for his leadership and he is a perfect example of the kinds of people we grow in Pine Plains.”

As legislator for District 19, Pulver represents Pine Plains as well as the towns of Stanford, North East and Milan. He began his life in public service on the Pine Plains Board of Education, which he served on for six years. He then served 12 years as the Pine Plains town supervisor. In 2012, he lost to Democratic opponent Brian Coons.

“I lost the election because of zoning and the Durst Project. I lost — that was all there was to it,” said Pulver frankly. “That taught me a lot. That defeat probably did more for me than winning all those years. And I think we had a pretty good run… I’m happy where I’m at. I love being a legislator and I love being the chair.”

Some of the accomplishments he’s most proud of during his tenure include enacting term limits — there is now a 12-year cap for the county executive, county legislators and county comptroller. The Legislature also put in independent political redistricting; it is only the second county in New York State to do so, which Pulver said means “no more gerrymandering.”

Molinaro, who offered congratulations to “my friend Gregg Pulver upon his re-election,” also offered his support on Pulver’s push for redistricting in a Jan. 4 statement.

“I support Chairman Pulver’s hope for possibly reducing the size of the Legislature as we look to begin the important process of redistricting,” stated the county executive. “[It] would reduce costs to our taxpayers — which is perhaps more critical than ever following this past year of financial uncertainty.”

Pulver said Dutchess County now has what he said are the “strongest ethics laws in the state that I know of, plus my two favorite laws: the animal cruelty registry law and the humane tethering law. I give lot of credit to my wife for that, and to DCSPCA.”

Those laws were drafted in 2019. In 2020, Pulver said, “the focus was on one thing and one thing alone: Finances and doing whatever we could to make the population safe. I give a lot of kudos to Marcus and Health Commissioner Dr. [Anil] Vaidian and Department of Health. It’s a tough thing; a lot of people like to compare us to Columbia County, but we have 300,000 residents and Columbia County has 60,000. It’s apples and oranges, and I think we’ve done an outstanding job.”

Pulver said the Legislature  works well together, and he hopes it will continue to do so.

“We’re good, we’re better than most,” he said. “We’re certainly better than the Congress and Albany. But I was talking to people who said we don’t get a lot of notoriety; that’s great. We like it, in Dutchess County, like that.