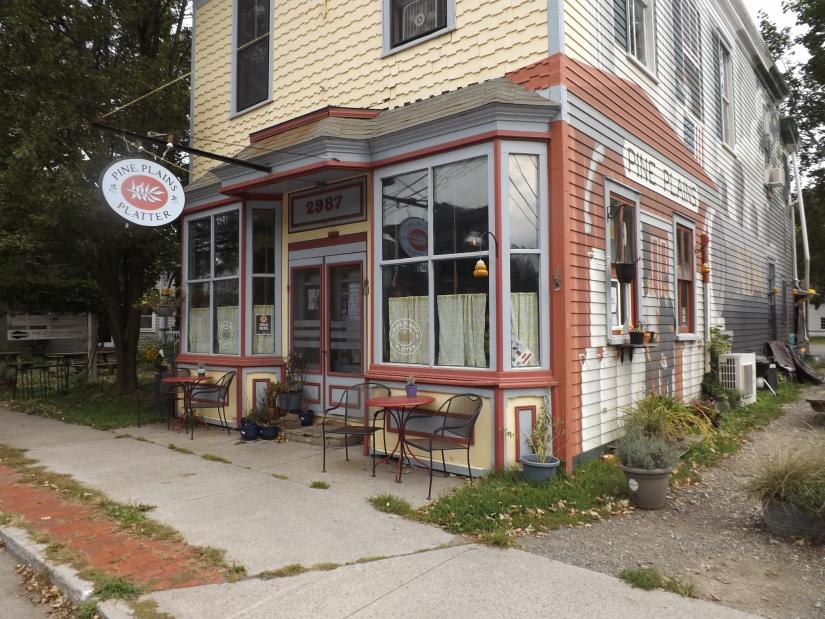 Located on Church Street (Route 199) next to Peck’s Market, many customers will be sad to say goodbye to one of their favorite community hubs, the Pine Plains Platter, when it shuts down on Sunday, Sept. 26. Photo by Kaitlin Lyle

Pine Plains Platter to shut down for good

PINE PLAINS — For many local residents as well as visitors to Pine Plains, the thought of driving into town one day and seeing the Pine Plains Platter permanently closed seems unimaginable, given how the cafe has flourished these last few years as a hub for the community, not to mention a place to get some great home cooking. Yet to the disappointment of practically everyone — The Platter’s owners/landlords, its manager and staff and its clientele, that thought will soon become a reality as the business is going to shutdown for good come Sunday, Sept. 26.

Established at 2987 Church St. (Route 199), next to Peck’s Market, The Platter is housed on the street level of a building owned by Jack and Irene Banning, who purchased it in 2012. While the pair owns The Platter, it’s been run for the past few years by the very competent Christina Smith-Hedges, who had hopes of taking over the business.

“Our aim always was to provide a platform for some entrepreneur who would come in and manage the restaurant for us and become in a position to purchase the business then take over the lease and that’s what we hoped would happen,” Jack Banning said.

Over time, The Platter gained a following from the local and weekend communities. When the COVID-19 pandemic hit, Smith-Hedges said she and her staff did everything they possibly could to adapt, following all the safety rules and even picking up catering orders.

However, after spending the last several months trying to figure out how to keep operations moving forward, Banning realized they reached a point where it wasn’t going to work out anymore and they had to pull the plug.

The business decision was especially difficult for Smith-Hedges, who had planned to purchase the building from the Bannings this fall. She said she’d gone into a meeting with Jack thinking it would be to talk about her purchasing the building. Instead, she said he rescinded the offer, saying The Platter was barely sustaining itself through the pandemic and that he didn’t see things getting any better.

Banning explained he and Irene had conversations with Smith-Hedges and thought they might be able to structure an arrangement to save the cafe.

Attributing their decision to a combination of factors, he said they looked at the finances, what options were available to Smith-Hedges and what her skill sets were and determined there was no viable way to make the business succeed. Though the Bannings suggested The Platter close the week of Friday, Oct. 1, Smith-Hedges decided the Platter would close on Sunday, Sept. 26.

Notifying The Platter’s employees of the closure, Banning said they provided everyone with five weeks’ notice with the expectation that they’d provide generous compensation.

Smith-Hedges said it’s now a guessing game, knowing how short-staffed she currently is. So far, The Platter’s hours of operation have been reduced and the menu is limited.

Catching on to the news of The Platter’s imminent closing, customers have said they are heartbroken at the thought of their favorite local cafe shutting down. Many have posted on social media their disappointment, others have contacted this newspaper.

“This is heartbreaking for the employees, a tremendous loss for the town and a special blow to weekenders who have only this one place to eat on Sundays,” said Pine Plains resident Matt Finley.

“In this ever-changing world with much pain and uncertainty… we want to thank you, Cris, and your incredible team for creating this magical place in our community and in my life,” said Santina Tirone, another loyal customer. “Your open arms, warmth and not to mention the incredible fresh local menu with be tragically missed.”

Come Sunday, Sept. 26, at 10 a.m., Smith-Hedges said The Platter will hold a Peace Out Platter Party. As a token of her seven years at The Platter, she said she bought a book to compile all of the pictures under the table and the sticky notes customers have left there.

“Basically, the love I put into this place, I’m taking with me when I leave,” Smith-Hedges said, “so the last day is going to be a hard day… honestly, I’m still upset … but I’ve made peace with the decision.”

Yet this might not be the end for the cafe as Banning said he and Irene want something to continue in that space that’s “viable and provides the kind of environment that we think is right for this space. The Platter will survive in some incarnation. We’re hopeful. We’re sad obviously, but we’re hopeful.”