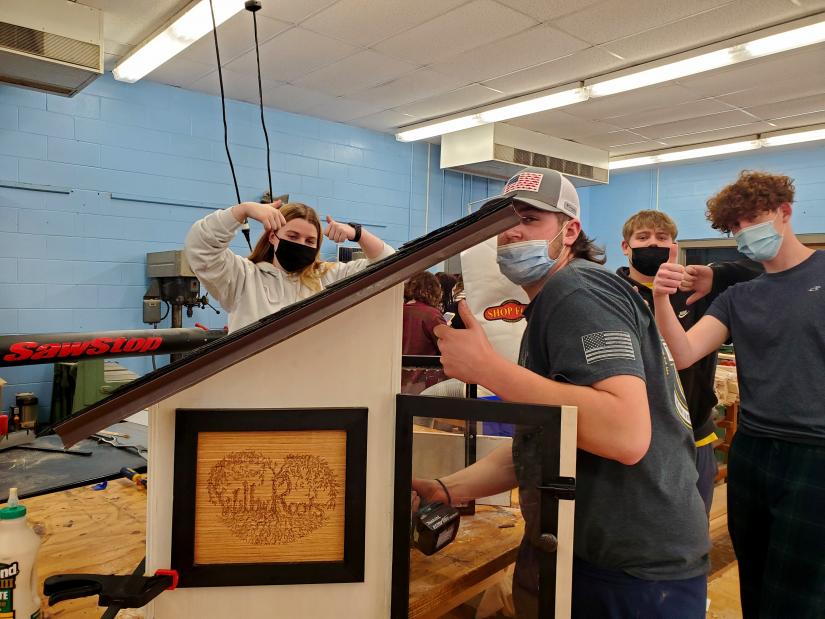 PINE PLAINS — Stissing Mountain High School math teacher Gerard Lisella obviously loves what he does. Anyone who has the pleasure of speaking with Mr. Lisella can hear the enthusiasm — not only for his subject matter, but for his students — ring out as clear as a bell in his voice.

For the past five or six weeks, however, Lisella’s passion for his work and his impression of his students have grown tenfold, as his Topics in Math class surprised him with the project-based-learning (PBL) project it recently chose.

The 16 students, a mix of boys and girls in grades 10 through 12, opted to build a small, free-standing food pantry planted in a flower pot for the local nonprofit Willow Roots. It will be installed outside of the Pine Plains Free Library (PPFL), so those in need can take something and/or leave something whenever they need to, like a lending library for essential nonperishable food items.

“I was impressed they could see that kind of generosity and I was a little proud of it, to hear that from teenagers,” said Lisella. “I was like, ‘What do you want to do for your class project?’ And they were like, ‘Charity work.’”

He explained the Topics in Math class in the PPCSD “is another option for students to get their math credit, and we have the freedom to make our own curriculum; it’s not aligned with certain standards like geometry, algebra, etc.”

The math teacher further explained that at the start of the school year he sits down with his students and tries to build a class agenda based on students’ interests, rather than on what the books suggest.

Lisella’s class had just completed two PBL projects, including the classic egg drop from the second-floor window and another project that was based in the woodshop.

The class was brainstorming for project number three and agreed it enjoyed working in the woodshop, but wanted to do something centered around the holidays. It was December at the time.

“They wanted to do something in theme of giving,” said Lisella. “By the end of their class period the students said, ‘Let’s build a donation box for charity,’ and by the next class period I got in touch with Lisa [Zayas, co-founder of Willow Roots], and we rolled with it.”

“He’s just such an incredible gentleman and we’re so lucky to have this man on our team,” said Zayas about Lisella. “Just his enthusiasm and love for the kids alone is inspiring.”

Lisella brought his students to the February Pine Plains Town Board meeting; they had written up a proposal for the board and he wanted them to present it to the town.

“I didn’t want to speak for them, it wasn’t my idea — it was theirs,” said Lisella. “I am just helping them channel it.”

And channel it they did. In fact, town Supervisor Brian Walsh liked the idea so much, not only did he approve the mini-food pantry being installed at the PPFL, he and the board wanted it to be done officially, with town officials and The Millerton News, the town’s official newspaper, on hand to record the moment for historical purposes.

“It’s a great project to bring students together and bring the community together. They did an excellent job. I don’t even know how to describe it,” said Walsh. “They did a great job; it’s a beautiful box. And Willow Roots goes above and beyond for the community; you couldn’t ask for anything more. It’s a great organization run by two great individuals.”

Zayas is appreciative of the town’s support, and said installing the small pantry at the library is just one more way of ensuring Willow Roots and its mission will continue on into the future.

“I know that Willow Roots will definitely be around long after Nelson [my husband and co-founder] and I are gone,” she said. “That’s our dream, that Willow Roots is something that we started and is still persevering. Our volunteers are young and dedicated and kind. It warms our heart. You know you’re doing the right thing when you get positive feedback. We’re still on the right track and doing what we’re supposed to do. We’re good.”

She added as far as funding the mini pantry, Lisella arranged everything.

“I do not know how much it cost. He said the school is funding it; they didn’t skimp.”

However, in interviewing the math teacher, it slipped out that he actually footed the bill personally. Lisella said he just picked up supplies and materials when needed and shoved the receipts into his pocket.

“I haven’t even been keeping track of prices or receipts or anything; we’re building it and just donating it in the end,” he said.

“That does not surprise me,” said Walsh.

Lisella said he didn’t bother to approach the school board because he didn’t want to deal with the red tape or delays.

“It all goes back around,” he said, adding he feels he’s the lucky one.

The pantry is 24-inches wide and 27-inches tall, sloping down to 18-inches in the back. It has an internal depth of 16 inches; 3/4-inch exterior grade plywood was used along with pressure-treated lumber.

Once installed, the free-standing pantry at the library will be incredibly useful to community. As Zayas said, Willow Roots has so many clients that some days it gives out so much food (plus free clothing and winter coats) it winds up “decimated.”

To prevent volunteer burnout, Willow Roots is now open twice a month, on the first and third Saturdays, from 10 to 11 a.m. However, Zayas said, it is “giving out more food, with longer distributions” on those days.

The installation of the new pantry is tentatively set for Wednesday, March 23, at 5 p.m. The public is invited to attend.