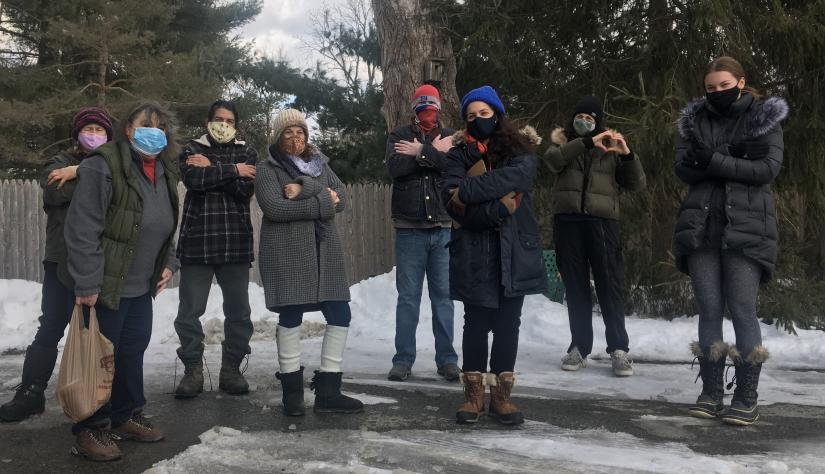 PINE PLAINS — Since they first began operations in June 2019, Nelson and Lisa Zayas have watched their food pantry, Willow Roots, gain ground as an integral part of the Pine Plains community, distributing more than 5,000 meals last year. However in the past number of months, the town has received complaints about Willow Roots from its neighbors regarding the high volume of traffic generated by pantry clients on Saturday mornings, when food is distributed. The pantry, located at 23 North Main St. in Pine Plains, borders North Main Street and Carla Terrace, and it has legal driveways on both roads. The majority of residents who have submitted complaints live on Carla Terrace.

Willow Roots has since submitted an application to the Pine Plains Planning Board for a major home occupation special use permit, which though a zoning issue is within the Planning Board’s jurisdiction. The board has been holding virtual meetings due to the COVID-19 pandemic, it held a virtual public hearing on Wednesday, Jan. 13; it also met on Thursday, Feb. 10, to make a determination on the pantry’s operation and where it fits in with the town’s zoning code. At the January hearing a number of letters from residents both for and against the pantry remaining where it is were submitted and read into the record. Residents also spoke at the public hearing in support of and in objection to the pantry’s location.

Here are some snippets of the letters supporting the pantry submitted at the January public hearing:

As a Willow Roots supporter and volunteer, Anibal Garcia said, “An hour a week to provide necessity foods to local families and seniors in need can never be deemed an inconvenience.”

Pine Plains resident Adria Couse expressed her gratitude to the Zayases for opening Willow Roots out of the kindness of their hearts to help the community.

Having received fresh vegetables from Willow Roots in the past, Thom Christopher praised Lisa and Nelson Zayas in his letter as residents “whose social consciousness is without question and beyond the call,” and that in these “horrendous times in our nation, there should be no questions proffered about this volunteer organization… To have even a murmur of displeasure from anyone in Pine Plains regarding ‘feeding those in need’ does not speak well of them or Pine Plains.”

As another recipient of Willow Roots’ services, Pine Plains resident Bruce Silvernale wrote, “It is my privilege to hold the high watch and pray for them and the community of Pine Plains. Why do you think we can become annoyed at someone needing extra assistance? Turn this into a channel of love relying on one another to live, grow, survive and thrive.”

The root of the complaints

The majority of those who spoke in January said their prime concerns had to do with safety and the increased traffic on the residential Carla Terrace when pantry clients come from around the Tri-state region, as Willow Roots does not have a residency requirement to obtain food at the Zayases’ front porch, where they hand out groceries and other essential items each week. Though neighbors expressed their appreciation for Willow Roots’ services, they shared how the impact of the heavy traffic has affected their community, adding it shouldn’t be their burden.

Given that the size of the parcel on which Willow Roots is located is merely for a single family home  (where the Zayases reside), Sheila Jameson, a Pine Plains homeowner, remarked the traffic on both sides of the food pantry, which she described as a business, is “really inappropriate” in the middle of the neighborhood. She remarked it isn’t appropriate to have traffic last for two hours in a single day, and that deliveries arriving on both sides of the road shouldn’t be dumped on the dead-end road.

“The issue for me is we are part of somebody’s business plan,” Jameson said. “I really think as a Planning Board, you need to look at the business, how it operates, how it affects its surroundings and you need to make your decisions based on the rules of the road on your side, and we need to not get caught up in the emotion of what this is. It’s not about what it is, it’s about what it’s doing to 23 North Main.”

Good works not the issue

“It’s really not a matter of what the Zayases are doing — we can all attest to the fact that what they’re doing is amazing,” Genesis Campbell, who lives on Carla Terrace, said, “but it’s really more of a fact here that this is about convenience and the convenience is now taking away from the people that live on a dead-end road.”

Having volunteered at Willow Roots, Pastor Ryan Larkin from the First United Presbyterian Church of Pine Plains, acknowledged the “pandemic aspect” of the traffic flows, but said he’s never observed any poor driving on behalf of the clients entering and exiting the street.

Neither have Pine Plains Police reported any dangerous driving while they patrolled Carla Terrace, said town Supervisor Darrah Cloud, according to comments she told this newspaper.

Meanwhile, Pine Plains resident Tori Soracco said the property developers could have chosen to make the road a private one, but did not. Carla Terrace remains a public road.

“This is not just a period of time like any other period of time,” Soracco said, referring to the COVID-19 pandemic. “The poverty is staggering, and as inconvenient or as unhappy as it may be for some of the residents at Carla Terrace, I feel like they may have to endure it for a little time. We all have to endure to help one another.”

Past permits and practices

Walking the Planning Board through the pantry’s previous permit applications, Nelson Zayas said he bought the property at 23 North Main St. in 2003 and submitted an application in 2004 for a driveway on the property leading to Carla Terrace, which was approved. In 2014, he started a tax preparation business and received approval on his special use permit. Willow Roots submitted its most recent permit application at the end of 2020.

Distributing food from his front porch once a week on Saturdays from 11 a.m. to noon, Zayas said the 15 to 20 Willow Roots volunteers typically show up around 10 a.m. and are usually finished by 12:15 p.m. Though last year was successful in terms of distributing more than 5,000 meals throughout the Tri-state region, Lisa Zayas shared how their work in feeding the community has been amplified by COVID-19 to the point of exhaustion.

“I am so sorry for inconveniencing everyone, but at this time I have to do what I have to do and I will continue to do that in the best way I can,” Lisa said. “One day, you might not need us and that will be fine. We’ll be happy to close shop because I would love to have my Saturdays back with my husband.”

With the advice of its attorney, Warren Replansky, Planning Board Chairman Michael Stabile said the application for the pantry doesn’t fit into the major home occupation definition as written in the town’s zoning code.

In the board’s draft resolution, a major home occupation is defined in the code as “any nonresidential use conducted wholly or partly in a dwelling unit or accessory structure thereto by the owner of the same… where customers, clients or sales representatives enter the premises and in which not more than three nonresidents are employed.” In his opinion, Stabile said the collection of goods that are given away by Willow Roots fits within the definition, but not the distribution of operation.

“It’s hard because of the good work that this organization does for the community,” he said. “That being said, whenever any application comes to us, we have to interpret it, make decisions on it based on how the law is interpreted, how it’s written.”

Given the pandemic, Planning Board member Dick Hermans said the board can’t go by the close definition and needs to “let up a little bit.”

In defining what can and can’t be done, he said, “The point is we want this activity to go on, we want it to be done safely and we’re doing the best we can to accommodate that.”

Board members then considered other town operations that could be labeled “major home operation”; safety issues connected to Carla Terrace and directing the flow of traffic; the distinction of the pantry’s distribution of goods; and possible limits to its hours of operation. Hermans said the draft resolution on Willow Roots’ application will be revised based on the board’s comments and will be discussed at its meeting on March 10, at 7:30 p.m.

The Zayases later remarked, “We will continue as long as we can. If the Planning Board does not grant us the permit, we will have to close our operations right away. The same thing if they issue is a permit with an end date, and we don’t have a commercial space to move into at that time.”