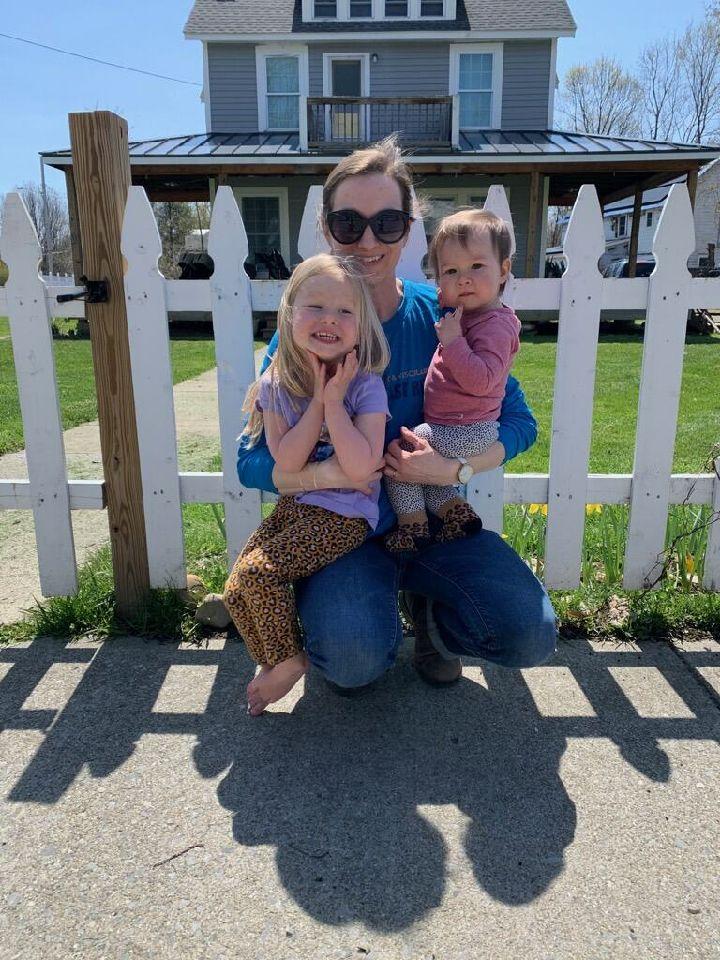 From left, Sarah Zick and her mother, Amanda, waited in front of their Pine Plains home in anticipation of a firetruck parade to celebrate her sister, Elizabeth’s, first birthday. As Elizabeth’s birthday fell on Tuesday, April 28, this year, the Pine Plains Hose Company scheduled a special visit to her house on Saturday, April 25, as part of its new joint birthday celebration program with the Stanford Fire Company. Photo submitted

PINE PLAINS — If the COVID-19 crisis has shown society anything, it’s that acts of kindness go a long way. As plans for celebrating birthdays, graduations, weddings and more have changed due to the coronavirus pandemic, people have done their best to adapt to the new normal. But local families wanting to celebrate their children’s birthdays were stymied about how to do so with social distancing preventing any party planning. That’s why the Pine Plains Hose Company and the Stanford Fire Company have joined forces to make birthdays special for the children in their two towns.

Calling it a morale booster during COVID-19, Pine Plains Councilperson Matt Zick said he thought of the idea as a way to help support the community.

“I feel I do a lot under the radar,” said the councilman, adding he wants to make sure that Pine Plains residents understand and appreciate how much the Town Board is trying to do to help people out right now. “I would like them to see that I’m doing good things that I believe are good for the town.”

Zick’s father, Stanford Fire Company Vice President Ed Zick, agreed that organizing a special celebration for local children by holding socially-distanced firetruck parades was a good idea. He added their other “cohort in crime” is Stanford Fire Company Secretary/Treasurer Kathie Spears, who was key in encouraging the fire company to cheer up local children who were unable to celebrate their birthdays in the traditional way.

“We’re doing this namely for the kids,” Ed Zick said. “When we run rounds on Saturdays, it’s such a joy just seeing the kids — it’s unbelievable. All the people that have driven in these parades agreed they would do it again, so it’s as much a morale booster for us as it is for them.”

To have their child’s birthday included in the fire companies’ rounds, parents should reach out to either Matthew Zick at 845-705-5533; Ed Zick at 845-266-8366; or Kathie Spiers at 845-868-7320. Parents have also been advised to call by 8 p.m. on the Thursday prior to the Saturday they want the drive by to occur. After determining their schedules, the fire companies will then reach out to the parents to give them an estimated time for their drive by. Additionally, the fire companies have asked parents to make sure they are outside with their child to ensure their child is supervised when the firetrucks pass by.

As far as how long the fire companies intend to make their birthday rounds, Matt Zick said, “I guess you can say we’re planning to do this as long as we need to.”

His father added that they wanted to thank Pine Plains Fire Chief Brian Walsh for helping to run the birthday program. He also mentioned that the fire companies from Milan and East Clinton joined the program last weekend.

In the meantime, the councilman said that the fire companies are now trying to get local town businesses involved with the rounds. As a celebration of healthcare professionals working around the clock to care for patients during the pandemic, Ed Zick said the fire companies have been trying to get a list of nurses in the participating towns to include them in a special celebration on Saturday, May 2.