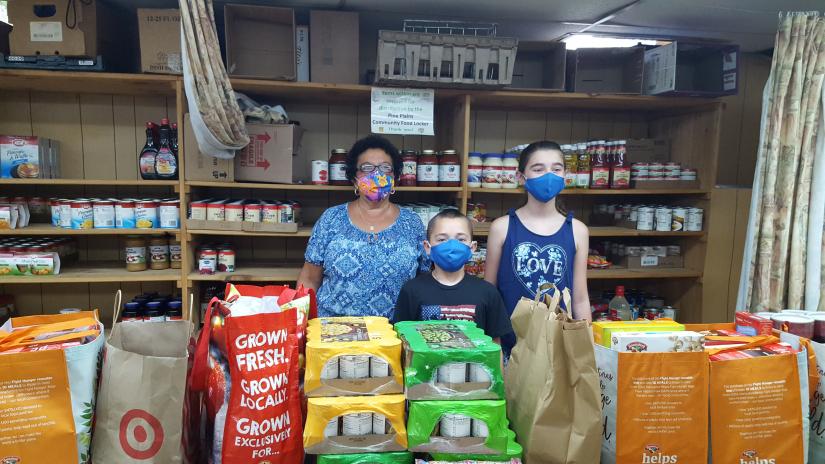 From left, Pine Plains Community Food Locker Director Pat Nannetti with Zachary Dina, 8, and his sister, Kaylee, 10, who helped purchase a variety of groceries, toiletries and other supplies for pantry clients through donations she helped raise to help people during the COVID-19 pandemic. Photo submitted

PINE PLAINS — Ever since she started accompanying her mother in volunteering for the Pine Plains Community Food Locker last fall, Kaylee Dina, 10, a sixth-grader from the Marlboro Central School District, has been going the extra mile to give back to the pantry’s clientele. Given the impact the COVID-19 pandemic has had on its ability to distribute food to community members in need, she recently put together a fundraiser inviting people to share a little kindness with others by donating food and other essentials.

Having learned about the joys of volunteering from her mother, Kaylee began helping out with the food locker’s monthly distributions in the fall of 2019. Located at 3023 Church St. (Route 199), the pantry is located in the basement of the Pine Plains United Methodist Church and distributes food to all nine towns in the Pine Plains Central School District once a month, including Pine Plains, Stanford, Ancram, North East, Clermont, Clinton, Gallatin, Livingston and Milan.

As she became more familiar with the its operations, Kaylee went a step further by coming up with creative ways to brighten the clients’ day, from creating little gift bags for Christmas and individually wrapping cookies for Valentine’s Day to handing out chocolate coins and scratch-off tickets for St. Patrick’s Day.

“She absolutely loves not only being able to go there but just being able to put a smile on their faces totally brightens up her day,” said Melanie Dina, Kaylee’s mother. “She has one of the biggest, kindest hearts of anybody I’ve known for somebody at the age of 10.”

As a result of the COVID-19 pandemic, Kaylee and her mother were rendered unable to drive food over to the clients’ homes. Yet instead of being deterred by the new normal, Kaylee came up with an idea to support the food locker and the people who rely on it.

“Because of COVID-19, I decided because I can’t go, I wanted to do something else,” Kaylee said, “and I decided to donate, and it’s amazing how many people want to help.”

At the start of June, Kaylee composed a letter inviting people to remember how much kindness matters and that “caring can change someone’s life.”

Her mother sent Kaylee’s message out to family and friends via text while her grandmother, Cynthia Roe, posted the letter on Facebook.

Much to their surprise, the letter went viral, resulting in an outpouring of donations from across the country and beyond. From family members and other donors living in California to a coworker of her mother’s from Ireland, word quickly spread about Kaylee’s fundraiser, which grew larger than she had anticipated.

Raising a total of $800, Kaylee explained in her fundraiser that all donations would go toward purchasing food for the Pine Plains Community Food Locker. Given her many months of volunteering, she already had an inkling about the kind of food needed, and she created a list of what to buy.

An accountant, Dina created a spreadsheet to determine what they could afford. With list in  hand, Kaylee and her mother went price shopping at local grocery stores before choosing Price Chopper as the best bargain.

Between Kaylee, her mother, her grandmother and a family friend, Michelle Roe, they managed to fill three shopping carts with food. Since they only spent $500 of the $800 during their first shopping trip, Kaylee created a list of toiletries needed — including toothbrushes and toothpaste, bars of soap, toilet paper and hand sanitizer — and shopped for those items as well. On Friday, July 24, they made their sizeable donation to the food locker.

“It’s an absolutely amazing thing that she did and it kind of goes a long way in helping others,” Dina said, “and it’s just amazing in how big her heart is to do what she did and to be able to be a part of that.”

“It’s funny because she always says to me that she looks up to me as a role model,” said Pine Plains Food Locker Community Director Patricia Nannetti, “and I say to her, ‘Young people should look to you as a role model.’ You see so many horrible things in the newspapers and the television and you see this young girl go out of her way, and she did this all by herself.

“She just really has a big heart and a lot of compassion for a young girl,” Nannetti added. “Let me tell you, that’s commendable — you don’t see a lot of that. It really makes your heart feel good knowing there are so many people willing to donate to a cause.”

Though she originally didn’t plan on hosting another round for her fundraiser, Kaylee was excited to report that round two is now underway.

In the meantime, the 10-year-old is currently writing thank you notes to send to all of the people who donated during the first round.

As a special thanks to Nannetti for her contributions to the local community over many, many years, Kaylee added, “Thank you to Miss Nannetti for all her hard work, and I think it’s absolutely amazing how kindness can go a long way.”

To donate to round two of  Kaylee’s fundraiser for the food locker, email melaniehdina@gmail.com.