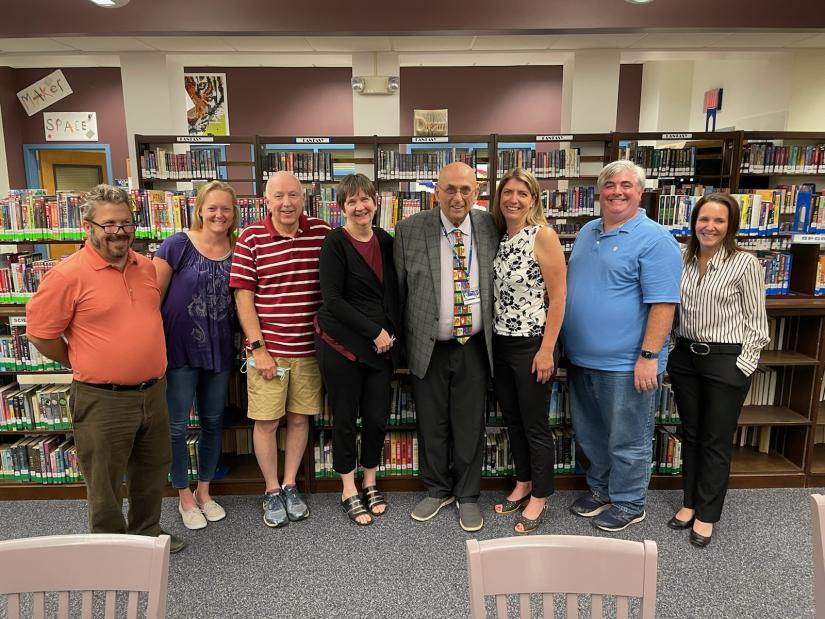 PINE PLAINS — Beyond the acclamations offered for his journey north to Oneida County, both Pine Plains Superintendent of Schools Martin Handler and the Pine Plains Board of Education (BOE) felt the sadness accompanying Handler’s retirement from the Pine Plains Central School District (CSD) at Handler’s last BOE meeting on Wednesday, June 15.

Handler began his career as superintendent of schools for the Pine Plains CSD in July 2013, and announced his decision to retire from the district last May. Following Handler’s official retirement on Thursday, June 30, Pine Plains Director of Curriculum and Instruction Brian Timm will step into the role of superintendent of schools on Friday, July 1.

As well as overseeing his final BOE meeting last Wednesday, Handler was also recognized as one of four Pine Plains retirees that had a book purchased and donated to the district libraries in their honor. Elizabeth Kolbert’s book “Under a White Sky: The Nature of the Future” was purchased and donated in Handler’s honor.

During the meeting’s second public comment section, the public commended Handler for wearing a lot of hats over the years: going above and beyond his role as superintendent of schools, Handler was praised for his work on the district’s athletic fields and for stepping in as a school bus driver.

“It’s been a pleasure, and I’ve enjoyed doing all of those things,” Handler said in reply.

Speaking on behalf to the BOE, BOE President Anne Arent said that when Handler took over nine years ago, the Pine Plains CSD “was not at all what it is today.” To that point, Arent reminisced how the district’s academics were at the bottom of the county and how there were unions without contracts, budgets that kept failing and a lack of community support.

“When you arrived, you never once balked at the challenges we threw in front of you,” Arent said to Handler. “Instead of being upset… you just rolled up your sleeves, you got busy.”

Throughout his nine years in the district, Arent praised Handler for creating new learning opportunities (such as the district’s one-to-one computer initiative), resolved contracts with the unions and immersed himself in community events.

“You wanted to understand what our district needed and you did it,” she said. “I want to thank you personally for everything you’ve done the last nine years to make our district the shining star that it is.”

“As your friend, I want to thank you for all your support and encouragement,” Arent said, “… and most importantly, thank you for watching all of our children, thank you for caring for them, thank you for loving them…As you leave Pine Plains for the Great North, please, please know you are leaving our community better than you found it and we are truly grateful.”

Reflecting on his final BOE meeting, Handler admitted he had mixed feelings.

“There were many kind words said, but I also have a sense of loss,” he said. “I have been a superintendent of schools for 35 years and it will feel very different not having those responsibilities.”

Asked how he feels about watching his last class graduate from the district, Handler said he will speak to them at the graduation ceremony on Saturday, June 25, at 10 a.m. in the Stissing Mountain Junior/Senior High School auditorium.

“They are a very special group of young people,” Handler said of this year’s class. “Despite all of the challenges of the pandemic, they have managed to show excellence in academics, athletics and the arts. I will always remember this group fondly.”

Shortly after retiring from the district, Handler said he and his wife will be moving to northern Oneida County, N.Y. Though he loves Pine Plains, Handler said they have family in the Oneida County area; by moving there, he’ll have a chance to see his grandchildren grow. As for work, while there’s nothing planned at this time, Handler said he’s open to opportunities and would like to stay in education “as it is something that I know a little bit about.”