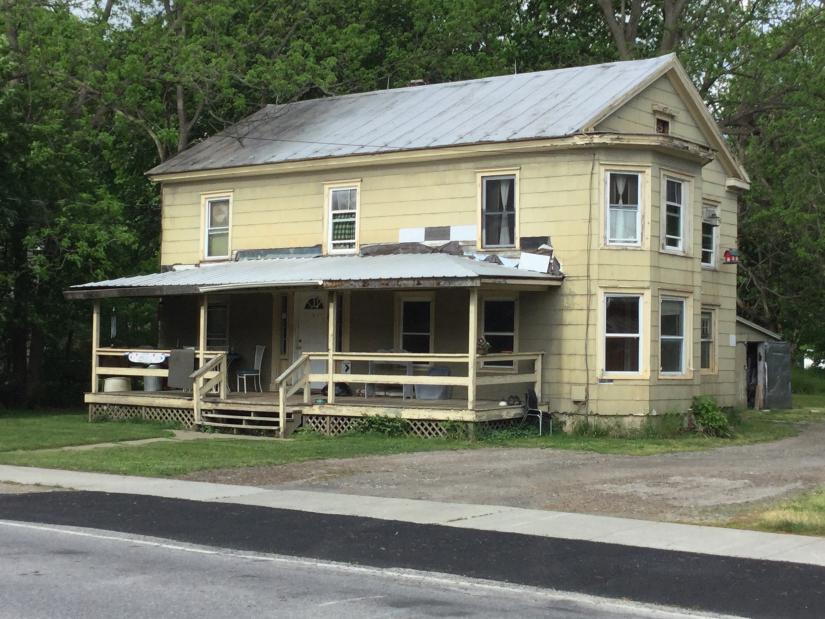 Identified as key real estate for the town’s revitalization plans, the Pine Plains Town Board unanimously agreed to make an offer of $100,000 for the property at 12 North Main St. this past February. Photo by Kaitlin Lyle

PINE PLAINS — In making an offer on the property at 12 North Main St. this past February, the Pine Plains Town Board seized a rare opportunity to make headway on the town’s long-standing goal of revitalizing its downtown. While the board received several shows of support on the buy, it also contended with a recent petition for a referendum vote on the purchase during a permissive referendum period. Between the onset of the coronavirus pandemic and bringing the petition to the Dutchess County Court, the board made itself available to the community to explain the significance of this purchase and how it will pave the way for a more vibrant town.

As reflected in its Comprehensive Plan — both in the original 2004 version and the newly updated 2019 version —  the town has had its heart set on enhancing its downtown area for several years. Along with improving public infrastructure, town leaders have envisioned moving Town Hall from its current location at 3284 Route 199 to the center of town to make it “more accessible to residents” and “help concentrate communal activity in the hamlet center and contribute to the vibrancy of Pine Plains,” according to the Town of Pine Plains 2019 Comprehensive Plan.

To fulfill this goal, the town purchased a parcel at 8 North Main St. back in August of 2019. The property at 12 North Main St. became available for purchase that October. As written in the board’s application to the Supreme Court of the State of New York County of Dutchess, Pine Plains town Supervisor Darrah Cloud explained that since the 12 North Main St. property is adjacent to 8 North Main St., both properties are located next to the municipal parking lot and the town’s historic Graham-Brush House and is “a mere 50 feet from the hamlet’s main intersection.”

Envisioning the property’s purchase as a multi-purpose opportunity to improve the town’s infrastructure and facilities, Cloud elaborated via the application that, after being purchased and cleaned up, the site could be used to expand public parking to support the hamlet. In an interview with The Millerton News, she said that owning the two pieces of real estate next to the municipal parking lot is key to its revitalization. Looking at the future, she said the land could be used to construct “a Town Hall large enough to accommodate town offices and meeting rooms, as well as Town Court and State Police functions.”

“I think that it will put a beautiful Town Hall in the middle of town where people will be able to see and use it more,” agreed Councilman Matthew Zick. “I just think it’s a good idea.”

Owned by Andrea Replansky, the wife of Attorney to the Town Warren Replansky, the property at 12 North Main St. had been appraised at $232,600 by its seller, Pine Ridge Properties LLC. Over the course of various sessions, the board was able to get the price down to $100,000. After negotiating the price, the town hired Gary Murphy as its lawyer for handling the contact.

The board unanimously agreed to make an offer of $100,000 for the property at its Feb. 20 meeting. Pine Ridge Properties LLC accepted the offer and sent the contract for the board to review at its April 13 workshop meeting. Immediately recognizing the rare opportunity to purchase key real estate at a reasonable price, the board voted to go forward with the contract at its April 16 meeting. Cloud was also pleased to report the town’s negotiation for a 2% interest rate through a Bond Anticipation Note (BAN).

“Once again, we will never be in a place historically to buy something like this at a price with that interest rate again in our lifetimes,” Cloud said.

However, in lieu of a traditional hand-written petition, the board instead received an online document with 190 names typed on it, of which on the face of it were a number of names of people who are not Pine Plains residents, names that were signed with only first names or names of known children, according to comments from both Zick and Cloud. Cloud added she has now spoken with a few people whose names are on the petition despite saying that “they did not sign it.” Additionally, the document did not contain any addresses or actual signatures, as required by law.

Though she assured the community in one of her recent e-newsletters that the Town Board is sensitive to any concerns the community may have, Cloud said “it would have been wholly irresponsible to accept this document as a real legal petition necessitating the instigation of a referendum, which is a very costly undertaking for a town.”

Nevertheless, she said on a later date, “We wanted to take it seriously because we wanted to listen to the fact that people wanted to talk about it.”

Hiring a lawyer to handle its case, the board brought the document to the attention of the Supreme Court of the State of New York County of Dutchess. The document was ruled by the court as invalid, given its lack of actual signatures and authentication of signatures; its failure to articulate a purpose for the petition; and the respondent’s “little effort to oppose this motion,” even during the pandemic.

“The respondent made very little effort to conform with the formalities of a petition, and specifically failed to articulate a purpose for the petition, so that the town or anyone else would know why a referendum was wanted… ” stated Judge Hal Greenwald.

Cloud shared plans to purchase the property as soon as the pandemic is over and the property’s tenants have vacated. In the meantime, residents have been encouraged to attend virtual Town Board meetings by going onto the “Town of Pine Plains” YouTube channel. Cloud mentioned that the town is in the process of creating a page on its website to address current projects; once that page is finished, residents can  go to www.pineplains-ny.gov for more information about the purchase.

“At this point, we’re going to make sure people understand what’s going on, the history of this decision and what is at stake and that the town can handle it financially,” Cloud said.