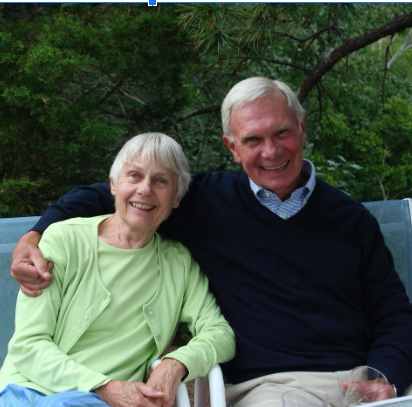 SALISBURY — Noble Foster (Nobby) Richards of Salisbury passed away peacefully at Noble Horizons on Jan. 6, 2023. He was 91 years old.

Noble devoted himself to his family and friends, and to the institutions where he lived and worked. Born on Jan. 13, 1931, to Foster and Bertha Richards, he attended Kent Center School and South Kent School. He graduated from South Kent in 1949, having served as the head prefect, and captain of the hockey team. After South Kent, Noble attended Trinity College in Hartford, where he majored in mathematics and was a member of the Air Force ROTC. While at Trinity, friends introduced him to Elizabeth Kotsrean, a student at Connecticut College. The two were married on Nov. 23, 1954, in Clayton, Missouri. They immediately moved to Japan, where Noble served as an Air Force pilot.

In 1956, upon completion of his military service, Noble returned to South Kent School as a mathematics teacher. He remained at South Kent as a teacher, coach and ultimately head of school until his retirement in 1996. While teaching at South Kent, he earned his MA in Education from Wesleyan University. To students and faculty colleagues at South Kent, Noble served as a role model — a humble, yet quietly powerful leader who applied the Christian values in which he believed. As a dedicated member of the school family, he did whatever was required, whenever it was required to support the school and its students.

After retiring from South Kent School, Noble and Liz lived in Kent and spent summers in Truro, Massachusetts where they had purchased a home in 1961. In 2017 they moved to Noble Horizons in Salisbury, where Noble became an integral and beloved part of the community. When Liz moved to the Noble Horizons memory unit, Noble visited her daily, usually arriving on his tricycle.

Noble was loving, playful and deeply caring. He cried when his children and grandchildren departed after a visit to Kent or Truro. On Cape Cod, he fished with his sons from a wooden dory he built himself. He played games and danced with his grandchildren. He collected and arranged bottle brush, clover, Queen Anne’s lace, sea lavender and other wildflowers. Protected in military bib overalls, he plunged into the brush near the family house to gather heaping buckets of blueberries for family breakfasts.

Noble loved to hike and bike. He worked many summers as a Cape Cod National Seashore ranger, walking the trails and beaches and sharing his knowledge of plants and wildlife with visitors. He rode every bike-able roadway in northwestern Connecticut and in the towns of Truro and Provincetown on Cape Cod. For a 90th birthday present he proposed a bicycling trip on the KT Trail in Missouri. He completed that ride in October 2022 in the company of 15 family members and friends.

A memorial service for Noble will be scheduled at South Kent School, with details to be announced at a later date. In lieu of flowers, the family asks that donations in Noble’s memory be made to the Alzheimer’s Association, Noble Horizons, or South Kent School.