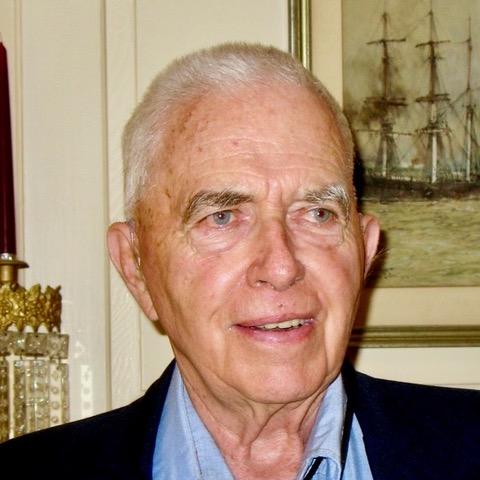 He was born on Jan. 14, 1924, in Brooklyn, N.Y., was raised in Briarcliff, N.Y., and after marrying his beloved wife, Dorothy, in June 1946, lived in Floral Park, N.Y., until his retirement in 1986. Then they moved to North Canaan, an area very dear to them that was close to the family cottage in Pine Grove, Falls Village.

Ian is predeceased by Dorothy, his wife of 65 years; and his sister, Marjorie LaMarque. He leaves two sons, Douglas and wife Joan and David and wife Shirley; and grandsons Stuart and Andrew.

Ian graduated from the NYS Maritime Academy at Fort Schuyler, N.Y., in 1943, then joined the Merchant Marines during World War II, serving on Liberty ships on runs in the North Atlantic to Archangel, Russia and to the Pacific. He enjoyed telling stories of his adventures during that time. After returning home and marrying, he worked in the HVAC field, at times away from home in Quebec and Albuquerque.

He loved the outdoors and passed that love on to his sons. One of his adventures was taking the boys backpacking on the Appalachian Trail.

Retirement opened up opportunities for volunteering, and Ian became an invaluable member of several organizations. For over 20 years he was a trail maintainer for the Prospect Mountain section of the Appalachian Trail; he worked on trail crews and he made trail signs, many of which are still in use. He wrote the newsletter for the Housatonic Camera Club, and he and Dorothy were very active with the Falls Village Historical Society for many years, during which he helped renovate the bell tower of the South Canaan Meeting House. More recently he was a board member for Friends of Beckley Furnace and could be found volunteering during the summer right up to his last year.

Ian and Dorothy loved to travel and Ian would spend winters researching and planning before taking long road trips to explore the country. They also made several trips to visit family in Scotland and England and traveled to Norway. In the summer Ian often could be found riding his bike, hiking or taking Dorothy out on Twin Lakes in his beautiful wood-and-canvas canoe.

Ian was always very curious, had a wicked sense of humor and took an interest in news and modern technology. His last act was to donate his body to science at the Yale School of Medicine.

Ian lived a very full life and will be greatly missed!

There will be a Memorial/Celebration of Life after the pandemic.