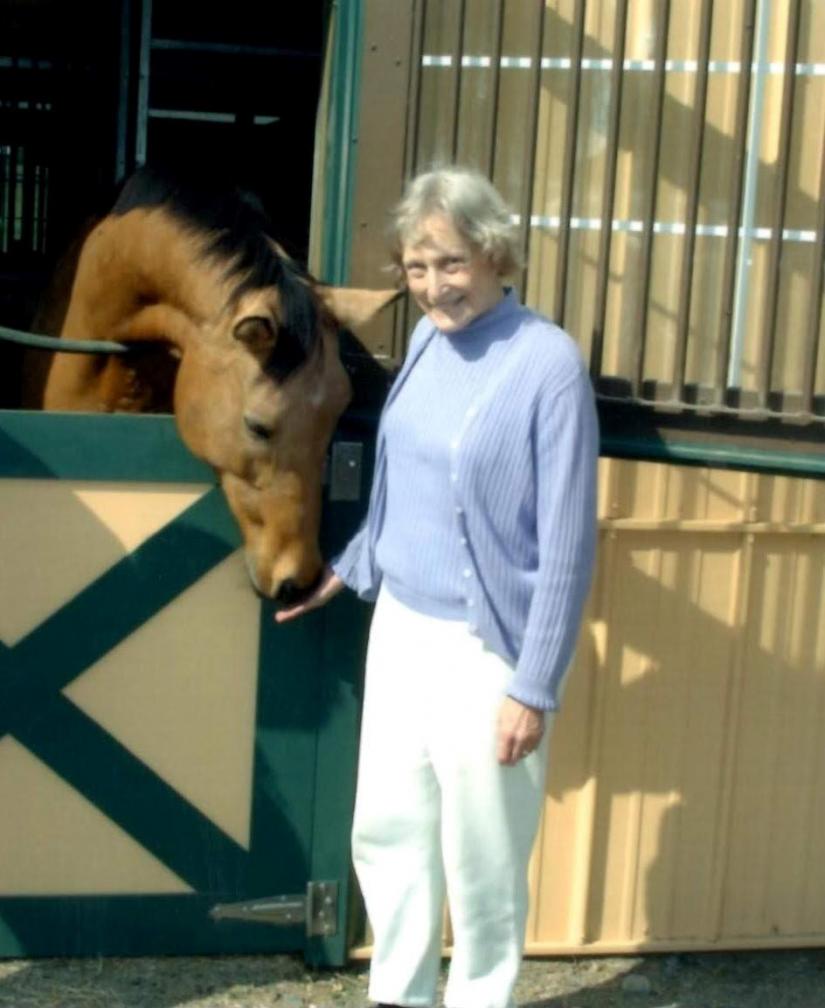 FALLS VILLAGE — Helen was born in 1931 in Rockford, Illinois, the youngest of the four children of Mildred Ingersoll Gaylord and Robert Gaylord. Her father ran the family company Ingersoll Milling Machine, one of the largest machine tool companies in the world. She was mostly raised by a nurse, Fern with whom she remained in close contact with until Fern’s death in the eighties.

Helen had always wanted a horse but her parents insisted she start with a donkey to be sure she was serious. She was and so began a lifelong love of horses and riding. She continued to ride until age 86 when her last horse Lark died.

She attended Keith Country Day School, Emma Willard and finally Westlake School before beginning Stanford in 1949. She graduated Stanford with a Speech and Drama and a Minor in Dance in 1953. During the summers of the years she was at Stanford she attended the Perry Mansfield Camp in Steamboat Springs, Colorado. Since Charlotte Perry and Portia Mansfield were running the camp at that time the Steamboat Historical Society did an Oral History with her in the nineties. After graduating from Stanford she moved first to Pittsburgh to do graduate work at Carnegie Mellon then New York City to pursue a career in theatre and dance. During that time she studied with Jose Limon Dance Company. NYC was where she met her future husband David Townsend when he knocked on her door by mistake on his way to a party in her building. They married in 1960 and would be married for 62 years.

Helen and David moved to his aunt’s 200 plus year old house in Falls Village in 1963 and would become fixtures in that community for the next 54 years.  Many wonderful summers were spent there with Joan Burdick (Helen’s best friend) and her family. The Burdicks would become a second family to Helen and her family. Helen started her own Dance Studio, Dance Adventures in the Grange Hall in Falls Village.

She also served on the Board of TriArts a local theatre group with New York connections. She had roles in many of their productions through the years such as; Oklahoma, Barnum, Fiddler on the Roof and the Music Man. Helen volunteered for Reading for the Blind in Litchfield using her wonderful speaking voice to help others.

Helen and David spent many summers exploring the East Coast with friends and family on their boat La Bayadare (named after a Ballet in honor of Helen).

Their connection to New York City remained unbroken as they spent time in the city with relatives and friends and supporting the Paul Taylor Dance Company and various other theatre and dance productions through the years.

Helen lived for her children, grandchildren and many pets. They had a series of Labradors, Scotties, Australian Shepherds, horses and cats. One Australian Shepherd she rescued from a ranch in Montana after he broke his leg and was discov ered to be deaf.  Max lived the next 13 years in Falls Village and was always faithful and grateful to Helen. Her support for causes she believed in (theatre, dance, environment, animals, the Democratic Party and abortion rights) was ongoing throughout her life.

On Dec. 24, 2022, Helen died with her family and her beloved rescue cat Nala by her side in Falmouth, Maine. She is survived by her husband David and daughter Lila (Portland, Maine), daughter Sheila (Golden, Colorado), granddaughter Claire Nimlos (Lakewood, Colorado) , granddaughter Danika Nimlos ( Pasadena , California).

Donations in lieu of flowers can be made to the animal rescue group of your choice.

Fond memories and expressions of sympathy may be shared at www.lindquistFuneralHome.com for the Townsend family.