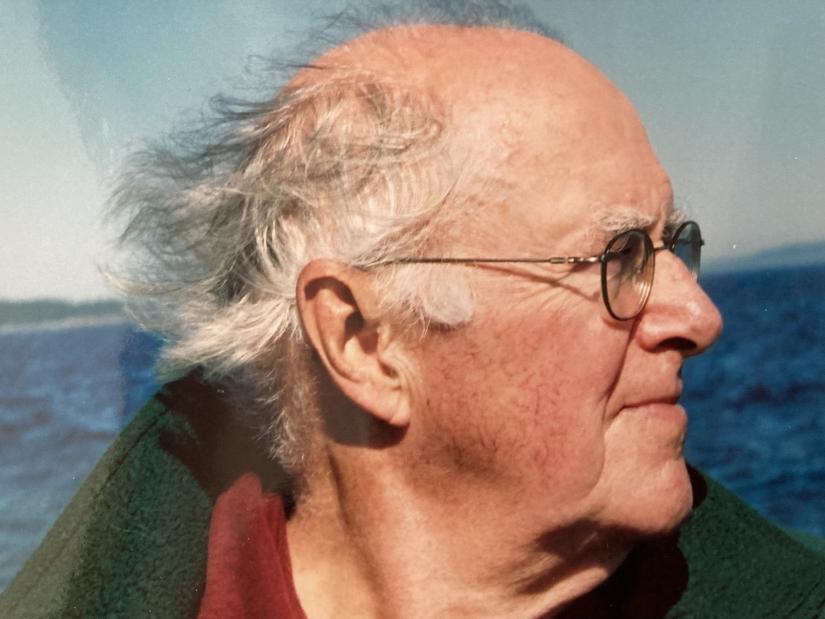 WEST CORNWALL — Hector Peart Prud’homme, of West Cornwall  died Sept. 22, 2021, of congestive heart failure at age 90. As he passed away at home, he held the hand of his wife of 63 years, Erica (Child) Prud’homme.

Hector was born on July 7, 1931, at the American Hospital in Paris, France, the eldest of three sons of the late Anne Carolyn (Bissell) and Hector C. Prud’homme. Hector C. moved his family to the U.S. and raised his family in Farmington and Canton, Conn. For junior high school, Hector P. attended the Brooks School in Massachusetts, and in high school he graduated from the International School of Geneva, Switzerland. In 1954 he graduated from Yale University with a B.A. in history and was a member of the Elihu society.

On May 31, 1958, he married Erica Child, an artist, and they raised their three children in New York City and Cornwall.

Fluent in French, Hector served as a U.S. Army intelligence officer at a NATO base in St-Jean d’Angely, France, from 1954-1956. Upon returning to the U.S. in 1956, he joined the private bank Brown Brothers & Harriman in New York City, as a trainee. Developing a specialty in commercial banking, he focused on foreign currency and foreign bank relations, and spent his entire career at the firm. In the late 1970s, he established the bank’s first business relations with China, and later ran Brown Brothers Foreign Exchange Advisory Service, a currency consulting business with Fortune 500 companies as clients. As a general partner at Brown Brothers for over a decade, Hector traveled extensively in Europe and Asia.

Upon his retirement from banking in 1984, Hector embarked on a second, fulfilling career in the nonprofit world. An active volunteer and generous philanthropist, he was a trustee or board member of the New Amsterdam Singers and the Citizens Budget Commission, and carried out projects for the National Executive Service Corps, in New York.

Inspired by the health and environmental problems he had witnessed in developing countries, he served Planned Parenthood of Greater New York as treasurer, president and honorary director over the course of 37 years.

At his home in Connecticut, Hector was devoted to the Cornwall Conservation Trust, where he served as president for nine years and was on the board for 33 years. During his tenure, the CCT conserved over a thousand acres of forest, farmland and watershed, and Hector was a trusted mentor and advisor to dozens of people. Acknowledging his careful, quiet work to build consensus on sometimes difficult questions, the town of Cornwall granted him its Citizen of the Year Award in 2017, an honor he was especially proud of.

Though he spent much of his life in Manhattan, Hector thought of himself as a “country gent” at heart. He found great solace in gardening, birdwatching, walking and —perhaps most of all — mowing and snowplowing with his blue Ford tractor.

In lieu of gifts or flowers, memorial contributions can be made to Planned Parenthood of Greater New York (www.plannedparenthood.org/planned-parenthood-greater-new-york) and the Cornwall Conservation Trust (www.cornwallconservationtrust.org).