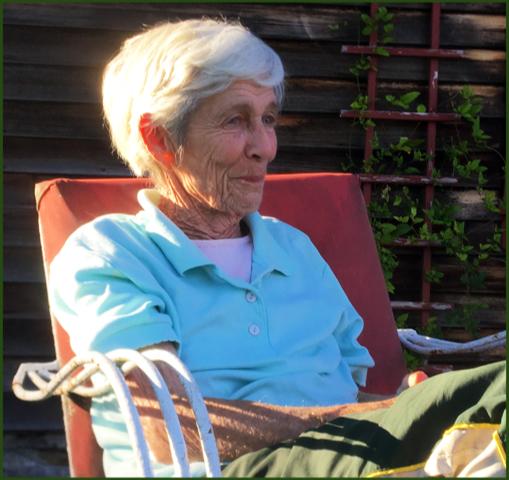 EAST CANAAN — Harriet “Hatsy” Robinson Taylor, 87, of East Canaan, a gardening author and columnist who chronicled the trials and triumphs of life on a hilltop farm in northwest Connecticut, died July 5, 2020, at Geer Village in North Canaan.

Hatsy began writing about gardening in 1982 with the debut of her column, “Hilltop Harvest,” which was published for years in The Lakeville Journal, the Torrington Register and the Berkshire Eagle, drawing a devoted following.

She also is the author of two illustrated books, “Weeds and Wisdom” and “Mother Nature’s Wit and Wisdom.”

In earlier years, Hatsy traveled from Maine to Minnesota to visit and lecture at local gardening clubs and, accompanied by her guitar, sing songs she wrote to go along with the topic.

Having worked as an accountant, Hatsy served on the North Canaan finance committee for several years. Her civic-minded contribution also extended to tireless efforts running the annual Norfolk Library Book Sale. For more than 35 years, with only a few helpers, Hatsy worked throughout the year sorting donated books to be sold in August under a tent in the library’s parking lot.

Hatsy volunteered with the Hospice Foundation of America and the Friendly Visitor program and participated in a local mentoring initiative. She also sang for many years with the Litchfield County Choral Union.

Besides gardening, Hatsy’s other passion was tennis and she excelled on the court, winning doubles championship matches over the years at the Norfolk Country Club.

Her head for numbers also led to success at bridge, a game she played with many lifelong friends.

Born on Aug. 9, 1932, the daughter of the late Mr. and Mrs. Henry C. Robinson, Hatsy was graduated from Renbrook School in West Hartford, Miss Porter’s School in Farmington and the Hartford School of Music. She also attended Sweet Briar College in Virginia.

In 1955, she married Henry Hammond Taylor of Fairfield, Conn., and in 1962 they purchased an abandoned farm in East Canaan, where they spent the next 43 years raising three daughters, along with an assortment of sheep, chickens, llamas and cows. Together Hatsy and Henry built a small business designing and manufacturing hand-crafted lamps, clocks and desk accessories.  Following her husband’s death in 2005, Hatsy continued to write about her life on the hill, adding a website and a weekly blog. She maintained a small flock of sheep and continued to pursue her gardening, tennis and bridge pastimes.

Well into her 80s, Hatsy epitomized the flinty Yankee pioneer, who hauled her own firewood to the wood stove, tended to her sheep in the dead of winter and indulged a preference for driving fast in a small red convertible.

Hatsy and Henry spent most of their lives together building a distinct little paradise on their hilltop.

On Aug. 9, 2020, family and friends are invited to remember Hatsy with a visit to the farm (60 Locust Hill, East Canaan) between the hours of 1 and 7 p.m.   Please respect current social distancing norms.

Memorial gifts may be given to the Douglas Library, 108 Main St., North Canaan, CT 06018, www.douglaslibrarycanaan.org/donate; or Planned Parenthood, www.weareplannedparenthood.org.