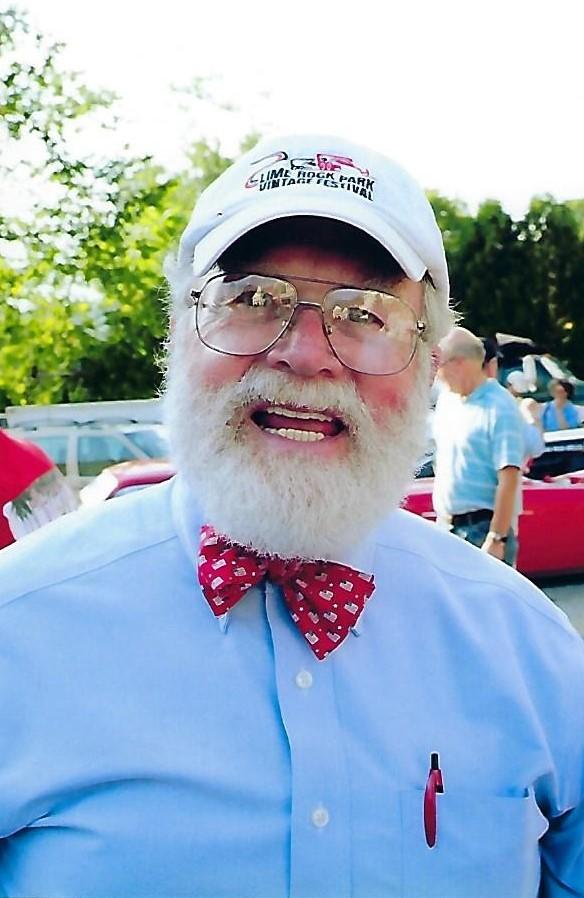 SOUTH EGREMONT —Mr. George Thomas Smith, 84, of South Egremont and South Harbor, Cape Breton Island, Nova Scotia, died peacefully at his home on Tuesday, August 2, 2022, or as George would say, he was “gathered up”.

Depending on how you knew him, George was affectionally known as Georgie, GT, Bowtie George, HoHo and Dad. He was a man who wore many hats, literally and figuratively. His claim to fame was his longevity in any of his endeavors whether it be his volunteerism in his community, his adventures in his vintage MG, or his patriarchal care of his family. As he got on in years he was often heard saying “I’ve been doing this for ages” or something to that effect.

Born February 17, 1938, in Winsted, George was the son of Irving G. Smith, a veteran of World War I and an entrepreneur, and the former Mary O’Meara, a teacher. He was an only child who was fortunate enough to grow up during the post war prosperity in small town America. On more than a handful of occasions a youthful George could be caught playing hooky with the mayor’s son or on an unapproved drive around town with one of the cars from his father’s Chevy dealership. George was fortunate to be able to attend the Loomis Chaffee School in Windsor, Connecticut, formerly the Loomis School, an all-boys school. He then attended the University of Pennsylvania Wharton School of Business and graduated with a degree in economics in 1960.

George’s professional career began at Anaconda American Brass in Waterbury. Soon after George began selling a bookkeeping system and accounting services throughout Berkshire County and relocated to South Egremont, Massachusetts. Here George had found his happy place, often spending time at nearby Catamount Ski Area where he became a member of the ski patrol and socializing at the Swiss Hutte. It was at the Swiss Hutte that George met the love of his life, the late Jane Cannon Smith, when he extinguished a small fire in her hair by dumping his scotch on her head. After the shock of her introduction to George wore off, his charm overtook her, and they married in 1968 remaining in South Egremont where they began a family.

George was immensely proud of his role as a father raising his three children with his wife Jane. Childhood under George was not typical. Instead of organized sports his children were often donning hunting gear and setting out on a Friday night to hunt racoons or spending Saturday mornings hunting pheasants. If you wanted George’s parental attention you needed to be a good mechanic as he often was tinkering and fixing his beloved MG TC to make it ready for racing or touring. The winter season brought skiing, a favorite past time and he eagerly taught each of his children how to ski as soon as they could stand. He was also very proud of his role as grandfather and great-grandfather. He looked forward to sharing milestone moments with his five granddaughters and was often a participant in cheering them on from the sideline, encouraging them to study hard or genuinely inquiring about their latest endeavors.

Among his family it was joked that he had a fourth child, his 1948 MG TC. This object of George’s fancy received a great deal of attention and care. In 1959 he purchased this classic auto from legendary racer John Fitch. George found equal joy tooling around in his MG with his wife by his side, calling on clients or touring New England. In 1986 he set out on a three-week cross-country adventure with his son Colin. George also took up vintage racing in the mid 1970s and had the opportunity to race circuits throughout New England and the Mid-Atlantic. George remained an active racer late into his 70’s.

Along with his love Jane, George discovered peace and relaxation in the highlands of Cape Breton Island in northern Nova Scotia, Canada. They loved it so much that they built a small vacation home there at the oceanside in hopes that children and grandchildren would visit them often as they spent their summers there. George was fortunate to realize this dream and each year would happily mark up the vacation house calendar with the events of each day such as what hike he did or who came to visit.

George is best known for his county wide accounting practice Smith, Watson and Company, LLP which started in 1973 with John (Jack) Watson. George and Jack had a reputation of honesty and it allowed them to grow their business from a four-person office to a successful cornerstone business of the community. Today the business carries on with the success that George and Jack had laid the foundation for. For George, community was so very important to him. Shortly after settling in South Berkshire County George recognized the need for formal emergency medical services after an auto accident in 1967 and along with 24 other community members formed Southern Berkshire Volunteer Ambulance Squad. As the squad grew and became well established George moved on to work with Fairview Hospital, then a separate organization from Berkshire Medical Center. As president of the board, he led the hospital through its building expansion and modernization. He later would become integrally involved in the merger of Fairview Hospital and Berkshire Medical Center to form Berkshire Health Systems, the healthcare resource our community relies on today. George was very generous with volunteering his time over the years. Healthcare always remained his passion.

George is survived by his three children Colin (Jennifer Gaenzle), Mara and Grinnan; five granddaughters, Marissa, Sara, Catherine, Jane and Lena and one great-grandson, Jake. He was predeceased by his wife Jane Cannon Smith.

A Liturgy of Christian Burial was held at Our Lady of the Valley Church, Sheffield, Massachusetts on August 9, at 11 a.m. The family received visitors at the family home 33 Bow Wow Road, South Egremont, on August 8  from 4 to 6 pm. (Note: GPS location may not be accurate. House is located ½ mile in from Route 41 end of Bow Wow Road) Memorial contributions may be made in George’s memory to Southern Berkshire Ambulance Service or Fairview Hospital.