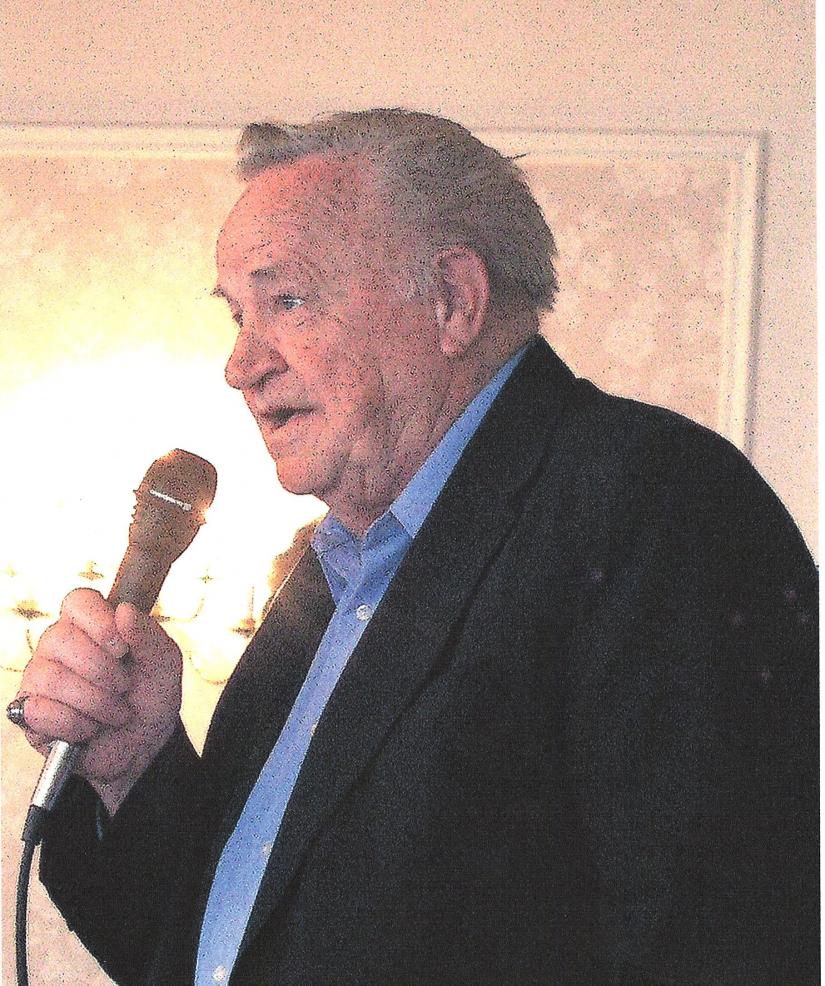 SHARON — Edmund Joseph Charles Chrostowski, a community journalist, editor and local historian for more than 60 years, died on June 15, 2020, at his home in Ridgefield, Conn., with his daughter and loyal cat Taz by his side. He was 91 years old.

He began his career as a reporter in New York City, quickly realizing his true desire was to be actively involved in the towns of Connecticut rapidly changing — or resisting change — from “the City.” Not only did he find both niche and forte, but also good friends and neighbors. He rapidly rose to editor of the Darien Review, followed by 35 years as editor of the New Canaan Advertiser. After retiring as editor in 1996, he continued to write twice-weekly columns for the Hearst newspapers in Darien and New Canaan. He also wrote at various times for the Associated Press, Norwalk Hour and the New York Times and once had his own news program on the radio. In addition, Mr. Chrostowski had been a panelist on television talk shows in New York, New Haven, Hartford and Norwalk and was a contributing author and editor of several books and magazine articles. He also had been a frequent speaker at meetings of local organizations.

Among his many state, regional and national weekly journalism honors, he was most proud of the New Canaan Bar Association’s Liberty Bell Award in 1981 for a series of articles on the U.S. Constitution, the George Washington Medal presented by the Freedom Foundation of Valley Forge, Pa., in 1969 for a series on the Bill of Rights and the Typewriter Award of the New England Press Association, Boston, Mass., for his coverage of a mass murder.

Mr. Chrostowski was born at home in Stamford on Sept. 6, 1928, son of the late Mary (Tisko) and Charles Chrostowski, and had lived in Wilton and Norwalk before moving to Ridgefield over 18 years ago.

After graduation from Holy Name School in Stamford, then from Stamford High in 1945, he received his degree at the University of Connecticut in 1949. He was very active in alumni affairs at UCONN, writing his class’s history and serving on the committee for its 50th anniversary reunion on the campus in Storrs. He also was an avid fan of all UCONN teams. While in Darien, he was a member of the Lions Club and served on the boards of the Cancer Society and Chamber of Commerce. He also was an honorary member of the Darien Fire Department and was appointed a special policeman so that he would be eligible to play on the department’s softball team.

In New Canaan, he was the Chamber of Commerce’s Man of the Year in 1985, received the Exchange Club’s Golden Deeds award in 1987 and was the Gridiron Club’s 1994 “fall guy.” He was a former member of the board of governors with The New Canaan Historical Society, headed its oral history department and served as its official town historian. He also was a member of the New Canaan Old-Timers Athletic Association and was honored by the association in 1987 for his role in local sports. In addition, he was a past president of the Poinsettia Club, a dine and debate organization of New Canaan civic leaders, and he had been vice president of the Connecticut Editorial Association. He also was among the founders of New Canaan’s “Family Fourth” celebration of Independence Day and was its treasurer for 12 years. Proud of his Polish heritage, he was a member of the Polish National Alliance and the Kosciuszko Foundation in New York and he was a third degree member of the Knights of Columbus.

Mr. Chrostowski is survived by his daughter, Amy (Chrostowski) Tocco, a physician in Sharon for 18 years; a sister, Lorraine Hogan of Stratford; a stepdaughter, Alison Picci of Norwalk; a stepson, Layne Dutlinger of Torrington; six grandchildren; four great-grandchildren; and many beloved nieces and nephews.

In addition to his parents, he was predeceased by his wife, Barbara (Batterson) Chrostowski; two children, Marjorie and Michael, both passing away due to muscular dystrophy as teens; his brother, Leonard Chrostowski, who was killed in action in Italy during World War II; as well as two sisters, Dorothy Poltrack and Marie Markiewicz.

Arrangements are private at this time due to COVID-19 restrictions. A memorial celebration is planned in New Canaan, “The Next Station to Heaven,” at a later date. Donations to his favorite place filled with joy and SPARKLE, hard work and Diversity, the Prospector Theater, Ridgefield; or the skilled Ridgefield Fire/EMS, who were and are always there for a good pick-me-up!

Kane Funeral Home of Ridgefield, Conn., is in charge of arrangements.