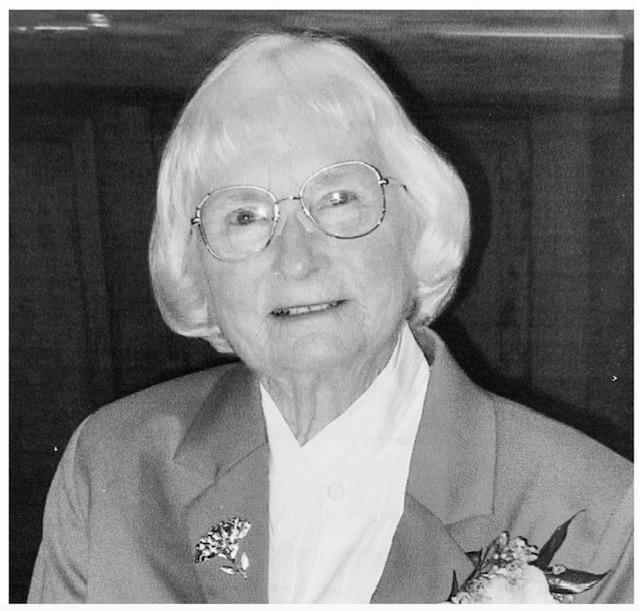 CANAAN — Annetta Eddy Brigham, 103, died at her home on Brigham Farm in Concord, Massachusetts on August 16, 2022.

Annetta “Anne” was born in Hartford, the daughter of Lawrence and Doane Eddy of Canaan. Although Anne’s childhood included time in Alabama, Connecticut, Kentucky, and England, she always felt spiritually drawn to Alaska, where her parents enjoyed their earliest married years. Anne attended Wellesley College, graduating in 1941, and Simmons School of Social Work during the years of WWII. For many years, she stayed in touch with friends from that time in her life.

In 1942, she married Eugene Francis Poutasse, an officer in the U.S. Naval Reserve Medical Corps who served in the Pacific war zone. They were divorced in 1948.

Anne married George Brigham in 1950 and raised her three children on Brigham Farm in the Nine Acre Corner neighborhood of Concord during the unique time when Concord was in transition from a rural to a modern suburban community. George grew produce for the wholesale and retail markets in the Boston area. Anne was a member of the League of Women Voters of Massachusetts and the family was active in the congregation of the First Parish in Concord.

In 1973, Anne and George retired to Canaan, Anne’s family home for many generations. Together they traveled around the U.S. in a small camper van, George with his camera and Anne with her watercolor paints and easel. Anne persisted with watercolors all her adult life, at times in study groups with other painters. Her favorite subjects were flowers and landscapes, including views of Alaskan glaciers and mountains. Trips to China and the Alaskan countryside were highlights of her travels and she prized friendships that she made from those places.

George and Anne moved from Canaan to the Noble Horizons community in Salisbury in 1999, where Anne was active in the camera club and the Unitarian Universalist Fellowship.  She had a lively intellectual curiosity and especially enjoyed certain rigorous discussion groups in the fields of cosmology and genetics. Throughout her long life, Anne would balance her deep New England roots against the currents of social and technical change, and approached every matter thoughtfully, like a scholar. Likewise her personal warmth was balanced by a strong traditional sense of propriety and dignity.

Anne is survived by a daughter, Jane Brigham Bailey and her husband, David Bailey of Concord; a son, Charles Poutasse and his wife, Christine Healey of Concord; and a son, Robert Poutasse and his wife Nancy Myerson of Granby. In addition, she is survived by grandchildren Kenneth Bailey, Charles Bailey, Adam Poutasse, Anna Keays, Samuel Poutasse, Jesse Poutasse, and Duncan Wellan, and seventeen great-grandchildren. She was predeceased by a sister, Emily Jane Eddy of Canaan.

A memorial service will be held in Concord on a date to be determined.  Private interment will be at Sleepy Hollow Cemetery, Concord.

In lieu of flowers, memorial contributions in Anne’s honor may be sent to Doctors Without Borders (donate.doctorswithoutborders.org) or a charity of your choice.

Arrangements are under the care of Dee Funeral Home & Cremation Service of Concord, MA.  To share a remembrance or to offer a condolence in Anne’s online guestbook, please visit www.DeeFuneralHome.com.