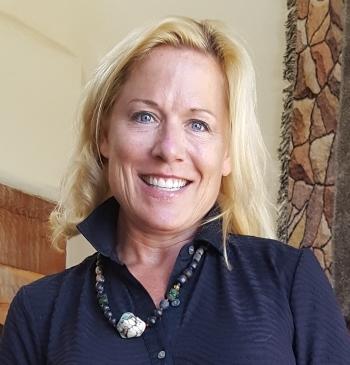 Andi was born in Lynchburg, Va., on Dec. 25, 1965. She was preceded in death by her father, Frank G. Wobst; and her father-in-law, Evan Jeney. She is survived by her mother, Joan Wobst; her husband, Steve Jeney, and their two sons, Alexander “Zander” and Frank “Frankie” Jeney; her brother and sister-in-law, Franck and Leigh Ann Wobst; her sister and brother-in-law, Ingrid Wobst and Kerry Hanes; her mother-in-law, Carol Jeney; her brother-in-law, Chris Jeney; and her nieces and nephews, Andrew Wobst and his wife, Rachel, Audrey Wobst Stanley and her husband, Tyler, Samantha Wobst and Jake, Harley, Jasper and Henry Hanes.

In 1974 Andi moved with her family to Columbus, Ohio, when her father, Frank Wobst, accepted a position at the Huntington National Bank. Andi attended Tremont Elementary before transferring to Columbus School for Girls. Andi loved her years at CSG and she excelled in both academics and athletics.

After high school Andi attended Georgetown University and graduated with honors in language and linguistics. While an undergraduate at Georgetown, Andi spent her junior year studying in Munich, Germany.

Andi valued her German heritage. As a child and young adult, she spent many vacations visiting relatives in Germany. As Andi and her siblings married and had children of their own, the Wobst-family vacations continued and expanded. The planning and execution of these epic family trips were her father’s passion, and the memories created are treasured by the entire family.

Soon after they were married in 1988, Andi and Steve moved to the Back Bay in Boston, where the couple’s kids were born.

During that time Andi developed a love for endurance running, completing more than seven marathons including the Boston Marathon three times. She was known for always running the second half faster than the first, and for celebrating after the marathon with dancing and karaoke late into the night.

Andi’s mother, Joan, is a respected and talented artist. When asked to create “The Umbrella Girl,” Joan used Andi as her model. The Umbrella Girl is now a beloved landmark and a symbol of German Village.

Andi shared her mother’s artistic talent. She had a wonderful ability to envision a space as it could be and then to bring that vision to life. Andi served as president of the board of the Roy G. Biv Art Gallery and a was a longterm board member of Columbus’s Pro Musica Chamber Music Orchestra.

Andi understood the value of friendship and cherished every one of them. If you were a friend of Andi’s it was a friendship for life, and you knew she had your back under any circumstance. Those close to her would often hear her quirky anecdotes on subjects ranging from true crime to her interactions with the many colorful people she came to know. Andi was the kind of special person that is rarely encountered, never forgotten, and always loved by those she touched.

Family was important to Andi, especially her sons, Zander and Frankie. She adored them and was incredibly proud of the men they had become. Speaking of and to her boys always brought Andi joy. Zander and Frankie are comforted in their mourning of their mother by the knowledge that they are the much loved and cherished sons of a remarkable woman.

Andi’s joie de vivre is what we will all remember. Confident in any setting, she was the life of the party but also made everyone feel welcome and comfortable.

She was irreverent but witty beyond words.

She had a way of making everyone feel like they were the only one in the room and did it with ease and grace.

In lieu of flowers please make donations to the charity of your choice in honor of Andi’s memory.

Details of Andi’s Celebration of Life will be forthcoming. Arrangements are by Schoedinger Northwest of Columbus. Go to www.schoedinger.com to share a memory of Andi.