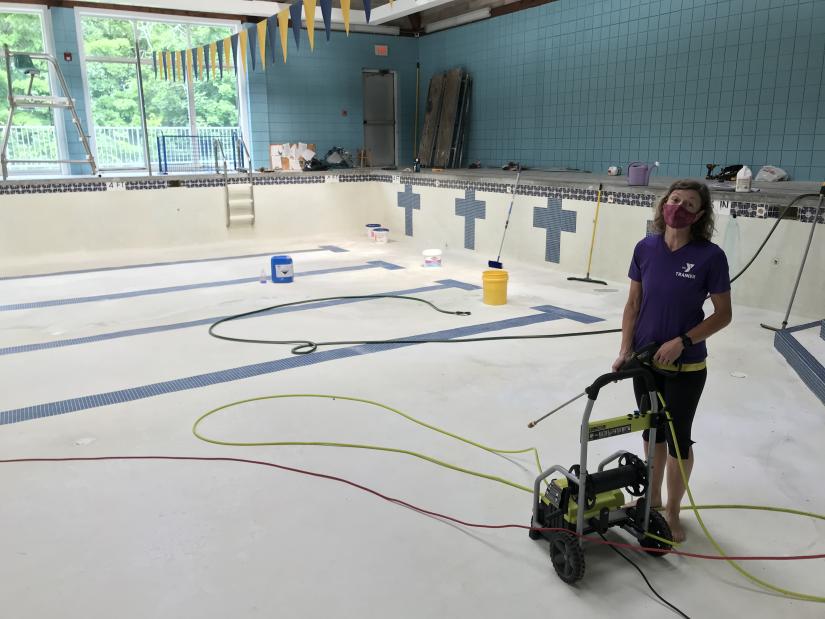 Lisa Douyard, fitness director at the YMCA in North Canaan at Geer, hopes the pool and other indoor facilities will open by Aug. 10. Parts of the YMCA will open on Aug. 3. Photo by Cynthia Hochswender

YMCA at Geer slowly comes back to life

NORTH CANAAN — Slow and sure has been the motto of the Northwest Connecticut YMCA in North Canaan at Geer Village, which closed March 16 for the COVID-19 quarantine.

Although other fitness centers in the state (including the Northwest Connecticut YMCAs in Torrington and Winsted) have already re-opened (with social distancing and special protocols), the North Canaan facility was slower to return.

One reason, of course, is that this YMCA is on the campus of a retirement and senior living facility — which has managed to keep its COVID-19 infections at zero.

Another reason is that the YMCA at Geer is getting a major overhaul, in part to make the fitness center and swimming pool safer for residents, YMCA members and staff.

Last Friday, July 24, Fitness Director Lisa Douyard gave a tour of the center, which now looks like a construction site. A new outside entrance is being constructed on one of the pathways into the building; YMCA members will enter through a special doorway that is separate from the entrance to Geer Village.

The entrance desk has been moved so it’s now across from the locker rooms. The locker rooms themselves are getting a facelift, with fresh paint for the lockers and a new drainage system.

“We ask all members at this time to shower at home before and after their swim,” Douyard said.

Members will still enter the swimming pool through the locker rooms, but they will now have to exit straight out of the building, in their swimsuits (bring a towel and dry coverup to the pool deck).

The former fitness classroom downstairs will become a cardio room, with rowing machines and recumbent bikes. There will be Plexiglass shields between machines. Upstairs there will be more cardio machines (and more Plexiglass) as well as weights and other workout gear.

Members will be required to sign up in advance for their workout time slot of 45 minutes. Members are asked to wipe down equipment before and after they use it, following YMCA instructions. At the end of their 45-minute session, YMCA staff will clean all the equipment to prepare for the next group, who will begin their exercise session at the beginning of the next hour.

While this sounds like a big ask, especially of members who are perhaps younger or less fastidious, Douyard said that so far it has worked out beautifully at the Torrington and Winsted YMCAs, where everyone has stepped up to create an environment that is safe for members and staff.

Classes that had been offered indoors up until the quarantine will be offered outdoors beginning on Aug. 3. There will be spin cycle classes on the patio deck outside the swimming pool and, on the lawn, Zumba, Body Sculpt, Power Circuit, Transform, Silver Sneakers and Balls, Bands and Bells.

Classes are limited in size and members must register ahead of time, by going to www.nycty.motionvibe.com.

“Where it asks for a bar code, type in your membership number,” Douyard said.

Many of the YMCA’s members either canceled or put their memberships on hold during the quarantine. She thanked those who were able to continue to pay their monthly fees, which made it possible to keep YMCA staff members working. In addition to helping to deep clean the facility, they also made facemasks and helped with deliveries of food and medicine to older area residents.

Anyone who needs to rejoin or take their membership off hold can do it at www.nwcty.org or by calling the Torrington branch at 860-489-3133 through Aug. 2. The North Canaan branch at Geer officially is open again on Aug. 3, so members can call 860-824-2790.

“We can’t wait to see people and bring the community back,” Douyard said. “We’re ready.”

Email updates will begin to go out this week with opening information and class schedules.