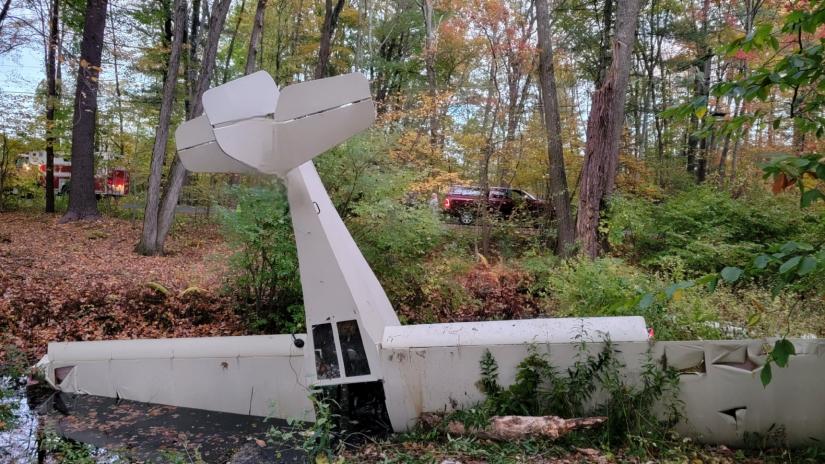 A small plane with a single occupant crashed after take-off from the airport in North Canaan on Thursday evening. Photo by Jonathan Barbagallo

NORTH CANAAN — The investigation into the crash of a small airplane in North Canaan on Thursday evening, Oct. 14, is now in the hands of the National Transportation Safety Board.

The single-engine plane crashed shortly after takeoff from the airport in North Canaan, near West Main Street and the town’s transfer station.

Jonathan Barbagallo, who is a fire volunteer for Norfolk and acts as public information officer for several area fire companies, was at the scene and posted this message on Twitter that evening: “Single engine, single occupant plane crash in North Canaan at 535 West Main Street off the end of the grass runway at North Canaan Airport.  Male occupant taken to Sharon Hospital by North Canaan EMS.  FD awaiting CT DEEP and FAA.”

He said in an email Monday morning that the crash “occurred in the woods off the southern end of the approximately 3,000-foot grass runway.   The plane ended up nose down in a small creek of water on the west side of West Main Street.”

He said the North Canaan fire and ambulance volunteers were called to the scene at 5:22 p.m.

In an interview with Fox 61 at the crash site, Barbagallo said it is believed the small plane was built from a kit. There was no information at the time on what caused the crash.

Barbagallo said that a neighbor heard the crash and rushed over to help the pilot out of the plane, which was standing in about two feet of water.

The identity of the pilot was not released. He was reported to be in serious condition, with “facial injuries” but he was “conscious and alert,”  Barbagallo said.

He was taken to Sharon Hospital by North Canaan emergency volunteers.

The Federal Aviation Administration released this statement on Friday, Oct. 15: “A single-engine Kitfox IV crashed in North Canaan, Conn., around 5:22 p.m. local time Thursday. Only the pilot was on board.

“The FAA will release the tail number of the aircraft after investigators verify it at the accident site. The FAA and National Transportation Safety Board will investigate. The NTSB will be in charge of the investigation and will provide additional updates. Neither agency identifies people involved in aircraft accidents.”

The airport is privately owned, and was sold to a new owner at the end of August for $1,300,000. Realtor John Harney, who was the listing agent for the sale, said the airport’s new owner was not the pilot in the crash, but that it was a local person.

According to the MLS real estate listing website, the runway runs parallel to the Housatonic River. It is on 65.5 acres in Connecticut, with an adjoining acre and a half in Massachusetts. There are 11 cold storage hangers on the property; there is no control tower.