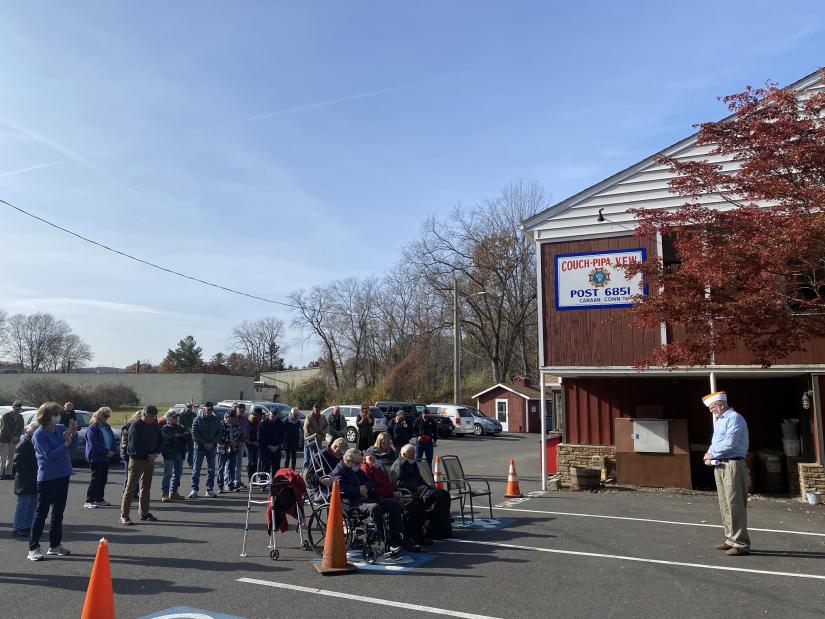 Ken Merrill spoke at the Couch-Pipa VFW before the gun salute and the playing of taps. Photo by Cynthia Hochswender

Reminding us that everyone needs to fight for our freedoms

NORTH CANAAN — This year, there was roadwork ongoing around the Doughboy statue in the center of town. And so the Couch-Pipa VFW held a Veterans Day ceremony at the hall on Route 7.

A small crowd assembled in the parking lot and watched as the honor guard, led by Marine veteran Christopher Sorrell, marched past the historic tank parked on the lawn. There was a gun salute from Army veteran Stan Ralph and Marine veteran Russell Duntz, and Marine veteran Nick Gandolfo led the playing of taps.

Ken Merrill led the group in a prayer and spoke of the history of Veterans Day.

The soldiers who are being honored, “were ordinary men and women, until they heard the call of duty and answered it.”

He added that, “Veterans Day isn’t just a day for veterans, it’s a day for all Americans.” Everyone, he said, has an obligation to protect our freedoms by voting and speaking out against injustice.