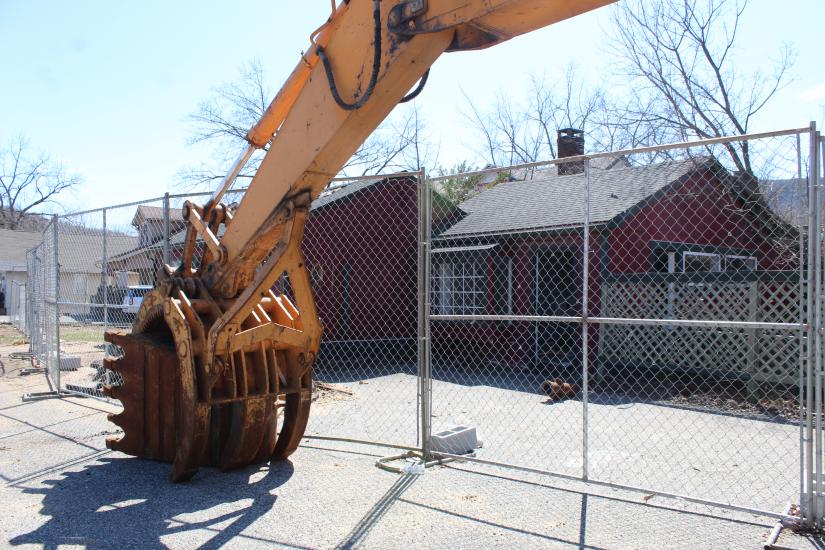 Demolition work will begin soon at the site of a $5.4 million health center in North Canaan. Photo by Patrick L. Sullivan

NORTH CANAAN — The state has awarded $3 million in funding toward the construction of a new $5.4 million health center in North Canaan that would provide Northwest Corner residents with increased access to primary and behavioral health-care services regardless of their ability to pay.

Referring to the funding nod by the State Bond Commission on Thursday, March 31, state Rep. Maria Horn (D-64) said plans by the Torrington-based Community Health and Wellness Center (CHWC) to build a Federally Qualified Health Center (FQHC) in North Canaan have been a top priority for years, and now the project “will at last become a reality.”

For several years the town of North Canaan, along with the CHWC and the Foundation for Community Health (FCH) in Sharon, have worked to get the project off the ground and into the community.

“The perception has been that we don’t need it out here, that we have these wealthy people throughout the Northwest Corner and all the second homes, but the reality is that there is a lot of need hidden away,” Horn said.

FCH grant helped with Phase One

Community Health and Wellness received a grant for $1.3 million from FCH in 2019 to help cover Phase One costs. Those costs related to the purchase of the property on East Main Street, opposite the Stop & Shop, and include preliminary building expenses, engineer and architect fees and feasibility studies on additional funding streams to finance the second phase of construction.

“This is a lifelong dream of mine,” said Nancy Heaton, FCH’s CEO.  Heaton was a founding member of the CHWC in Torrington, where she ran an AIDS program for many years.

“Federally Qualified Health Centers go beyond providing medical care, and seek to work with people and families to address other needs that may impact their health and well-being, like coordinating transportation or connecting them to other needed resources or programs,” Heaton said.

Joanne Borduas, CEO of CHWC, said in a recent interview that she is “elated” by the various partnerships and support on the local and state levels. The North Canaan health center will be the third under CHW’s umbrella. In addition to its Torrington facility, there is an FQHC in Winsted.

“The entire Northwest Corner is targeted because of the lack of primary care services,” she said.

The North Canaan FQHC’s coverage area will include the surrounding communities of Salisbury/ Lakeville, Cornwall, Falls Village/Canaan, Kent and Sharon.

As part of the first phase of the project, CHW purchased a parcel of land on East Main Street that formerly served as a florist, according to Borduas, and more recently as a woodworking shop. Three structures on the site, including a rental property and barn that was used by the owner for storage, are set for demolition in the coming days.

“There should be a new health center there by fall of 2023,” she said.

The two-story structure will house behavioral/mental health services and medical services and will be staffed initially with one physician, one Advanced Practice Registered Nurse (APRN), their support staff, two receptionists and a chiropractor.

The state has long recognized the need to provide primary health-care services to the poor, underserved, vulnerable and at risk for poor health. CHCs were first funded by the federal government as part of the Johnson administration’s War on Poverty in the mid-1960s.

Initially known as neighborhood health centers, these clinics were created to provide health and social service access points, and in return for doing so, CHCs received federal funds for start-up costs as well as operating subsidies that allowed them to function in environments where most patients had limited means to pay for care.

In 1989, Congress created the special designation of Federally Qualified Health Centers, thus the use of the acronym FQHC, which is commonly used to describe Community Health Centers.

In Connecticut, Community Health Centers provide health care to anyone who needs it, regardless of income or insurance status. According to the state Department of Public Health (DPH) health centers serve as the family doctor and medical home for more than 230,000 patients, or 6.6% of the state’s population who receive care at more than 110 sites in rural and urban areas across Connecticut.

According to Rep. Horn, CHCs play an important role in bringing vital healthcare services to rural communities, and the Northwest Corner of Connecticut is no exception.

Horn noted that 47.8% of elementary school children in North Canaan qualify for full or reduced-cost meals. In Sharon, she said, that number is 40%, and in Region One, it’s 35%.

Community Health Centers can also boost a town’s economic climate by generating foot traffic to other local businesses and through the creation of jobs, temporarily during the construction phase and permanently once it is up and running.

Horn said it’s become somewhat of a joke among her fellow lawmakers in Hartford that she is constantly reminding people that there are “another 45 miles in Connecticut beyond Torrington in terms of economic life in the Northwest Corner.”