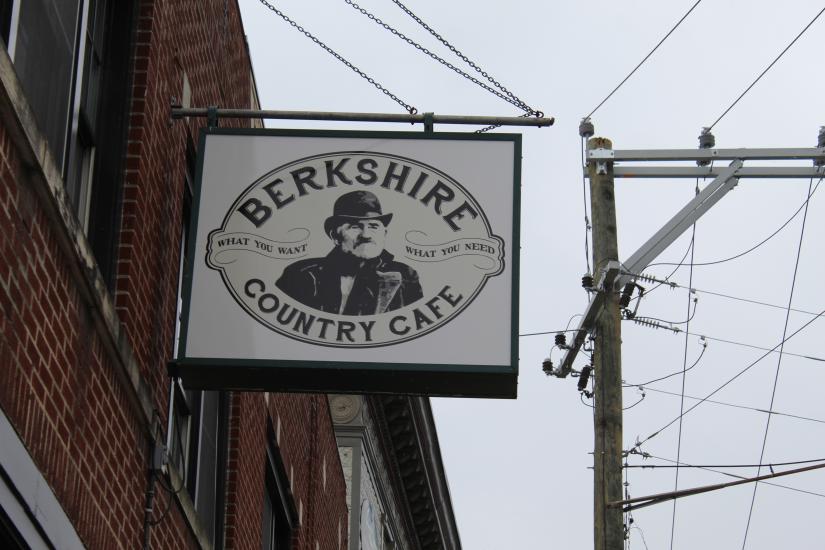 Part of the uniqueness of the Berkshire Country Café is its logo, which features the face of John o’ the Woods, a 19th-century wanderer who, legend says, passed through the Northwest Corner. Photo by Hunter O. Lyle

The restaurant opened on Saturday, Jan. 2, in the building that used to be home to Pop’s Diner. Craig, 37, said the café has been busy from the start, even reaching the 50% maximum capacity restriction occasionally.

“At lunchtime it’s about as busy as we can take it, and that’s just right off the jump,” Craig said. “That’s under COVID, in the middle of January before we get to the height of summer. We’re just working right now to get people trained so that we can keep up with the demand.”

The new café, which is at 85 Main St., was fully renovated to include a more open entrance and dining area, as well a completely new kitchen.

It also features an old-time logo that alludes to some local history, showing John o’ the Woods, a mysterious 19th-century wanderer of the Northwest Corner. ­

As the owner of the original Berkshire Country Store in Cornwall, which opened in January 2014, Craig was eventually recruited by the town of Norfolk to open a store there after his Cornwall location closed in 2016.

At the café in North Canaan, Ryan is serving classic diner food, with breakfast sandwiches and an array cold and hot lunches at affordable prices.

Craig said the North Canaan location is “focused solely on food service,” whereas in Norfolk, “we are the only deli in town — but we’re also the only grocery store or convenience store.”

The Berkshire Country Café is open Thursday through Sunday from 6 a.m. to 2 p.m. but Craig hopes to expand the days and hours of operation soon.

Patrons can dine in or order take-out from the Berkshire Country Café. The menu and hours are online at www.berkshirecountry.com.