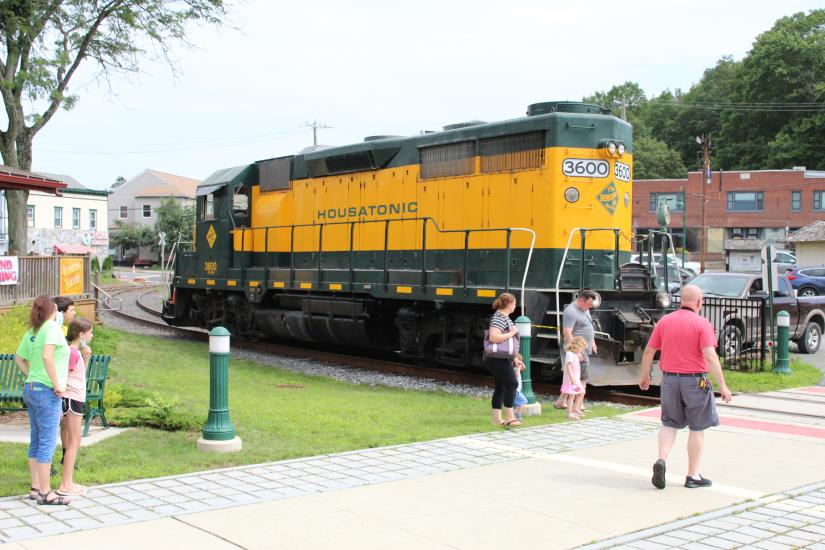 The Union Station depot in North Canaan has come back like a phoenix following a devastating fire in 2001. The station is once again, joyously, an attraction for visitors to the annual Railroad Days festivities, which began last week and continue to next weekend. Photo by Patrick L. Sullivan

Making the case for passenger rail service, during Railroad Days

NORTH CANAAN — An enthusiastic crowd gathered in an event room upstairs from the Great Falls Brewing Company on Saturday, July 17, for a presentation from the Train Campaign on restoring passenger service in Connecticut and Massachusetts.

The presentation was made during a rare sunny, dry moment in the weeklong annual Railroad Days celebration in North Canaan. While the group met upstairs at the former Union Station train depot, visitors from all over the state wandered in and out of the building and visited the new accordion museum and the museum of railway memorabilia.

North Canaan Selectman Christian Allyn filled in for state Rep. Maria Horn (D-64), who was unable to attend because of a minor medical problem.

Allyn noted that his generation, before the COVID-19 pandemic, was both driving less and leaving the Northwest Corner in search of opportunities elsewhere.

He said he was unwilling to watch his town die.

Recently, North Canaan “has been on a tear” with new investment in the town.

And to finish the job, Allyn said, what is needed is passenger service between North Canaan, Boston and New York.

Smitty Pignatelli (D), the state representative to the Massachusetts Legislature from the Berkshire 4th District and a resident of Lenox, talked about not just a north-south train service, but east to west.

Or, rather, west to east.

“If we start in the Berkshires, we will get to Boston.”

He conceded that any such project would be expensive, but restoring passenger service would be a “multi-generational investment.”

“I think with all the federal funds coming in we can get something going. We’re not going to see these kinds of dollars again in my lifetime.”

Pignatelli said when he talks with his constituents about passenger service between Pittsfield and New York, one item that always comes up is the willingness of Connecticut to participate.

“We’re willing to work with Connecticut,” he said. “Let’s get this thing done.”

Author Simon Winchester, a Berkshire County resident, spoke of his memories of taking the train from London to his boarding school in Dorset, a journey that involved three changes.

He said the United Kingdom’s rail service was drastically curtailed in the mid-1960s after the Beeching Report, named for Richard Beeching. The report recommended significant reductions in Britain’s rail infrastructure.

Winchester (now an American citizen) said the U.K. is now moving back to rail transportation, investing in high speed rail.

He acknowledged the cost but added, “It’s not impossible.

“It will change our lives in so many ways.”

Karen Christensen, founder of the Train Campaign, wrapped things up. She mentioned a 2011 study on the projected economic benefits of passenger train service (available on the Train Campaign website) and current efforts underway in Congress.

She urged the Connecticut audience to get in touch with their federal representatives and express their support for passenger rail.

“It’s going to make this a nicer place to live.”