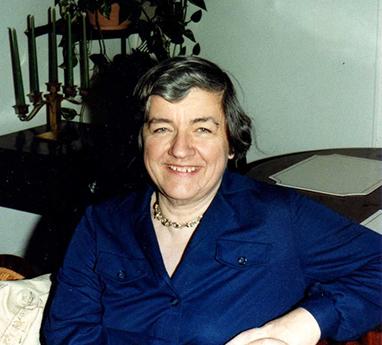 June 29, 2022
By
Kathryn Boughton
“We always argued in the name of married women. We knew it was the only way we could win.” — Catherine Roraback

NORTH CANAAN — Catherine Roraback must be spinning in her grave.

The fiery civil rights lawyer, who made Canaan her home, fought for women’s rights throughout her long life and in 1965 argued Griswold v. Connecticut all the way to the Supreme Court, thus establishing women’s right to use contraceptives.

Roraback, who died in 2007, would be furious at, but not surprised by, recent events. She was never sanguine about the permanency of a woman’s right to decide her reproductive future.

“We’re still fighting and we have to keep on fighting,” she said in 2002 during a Planned Parenthood League of Connecticut event honoring her. On that afternoon she shuffled through a long list of George H.W. Bush appointees who had been opposed to reproductive rights, including a doctor who headed an FDA advisory committee on reproductive rights. She told the 2002 gathering that conservative Republican administrations have long been dedicated to reversing “the rights we have fought so hard to get,” noting that funding for reproductive care is always under threat.

That the reversal of Roe v. Wade has been a long-term strategy for conservative Republicans is evidenced by the fact that it was overturned by two judges nominated by Bush father and son, as well as three Trump appointees, who reasoned that there is no specific reference to privacy in the Constitution.

Chief Justice John Roberts split hairs, saying he would have supported the Mississippi law that triggered the judicial review, but believes that overturning Roe v. Wade went too far.

Catherine Roraback exhibited no such equivocation when it came to women’s rights. Her involvement in the battle over reproductive rights began when she was tapped by Planned Parenthood League of Connecticut to argue the 1961 case of Estelle Griswold and Dr. C. Lee Buxton. Griswold, executive director of the Planned Parenthood League of Connecticut, and Buxton, a doctor and professor at Yale Medical School, opened a Planned Parenthood clinic, were arrested and found guilty as accessories to providing illegal contraception. Each was fined $100 and appealed the decision to the Supreme Court of Errors of Connecticut, which upheld the conviction. Roraback said in a 2002 interview with this writer that the defendants willfully defied the 1879 Barnum Act (drafted by circus owner and huckster, Sen. P.T. Barnum) to create a test case. At that time, only Connecticut had an absolute contraception ban, even for women whose lives would be imperiled by pregnancy. Under the Barnum Act, married couples faced arrest and imprisonment for using birth control.

Despite a 50-year battle to overturn the law, by 1940 all Planned Parenthood clinics in the state were closed and two doctors and a nurse had been convicted of violating the statute.

“It was not that women couldn’t get this advice,” Roraback said in 2002, “it was that poor women couldn’t. If you had enough money, you could go where contraceptives or abortions were available, but poor women didn’t have that option. … I have always felt that being a woman is a radicalizing experience and the Planned Parenthood women were radical on this point. It was not poor women who brought it about, it was an upper-middle-class WASP organization.”

But even with a lawyer at the helm who relished civil rights cases—she had already defended Communists at the height of the Red Scare of the 1950s—Planned Parenthood knew the limits of the arguments it could make. “We always argued in the name of married women,” Roraback related. “We knew it was the only way we could win.”

In the closing chapters of the judicial fight, work was conducted at a fever pitch. “Especially in the last years, briefs were being filed every day,” she said. “There was always something happening and we were changing briefs and making additions all the time. Things were changing so rapidly.”

Eventually, on June 7, 1965, the Supreme Court ruled 7-2 that a state’s ban on the use of contraceptives violated marital privacy. Justice William O. Douglas contended that the Bill of Right’s specific guarantees have “penumbras,” emanating from the “spirit” of the first, third, fourth, fifth and ninth amendments that create a general “right to privacy” that cannot be unduly infringed.

Concurring Justice Arthur Goldberg argued that the Ninth Amendment, which states that the Bill of Rights does not cover all of people’s rights, allows the Court to find the “fundamental right to marital privacy” without having to ground it in a specific constitutional amendment.

“It was a wonderful day for me when we heard the Griswold decision,” Roraback said in the 2001 appearance before Planned Parenthood. “It was a unique experience.”

But not her last. In 1972, she litigated Women v. Connecticut, Connecticut’s counterpart to Roe v. Wade, eliminating Connecticut’s anti-abortion statutes. That case may now have renewed importance as the most recent Supreme Court ruling returns abortion rights to the states.

Roraback’s radicalism never faded, even as her health did. Her former law partner, Michael Avery, related an anecdote at her memorial service. He stopped to see her about a month before her death and found she had advance sheets from the Supreme Court by her bed. “I said, ‘Katie, you can’t be reading those to cheer yourself up,’” he said. “She said she thought it was important that she stay in touch with what they are doing to the Constitution,” he reported.

Most assuredly, she would not be pleased today. But others are ready to pick up the mantle. Both Gov. Ned Lamont and Connecticut Attorney General William Tong issued statements pledging their support of women’s rights.

Lamont said the Supreme Court’s decision “oversteps the constitutional right for Americans to make their own reproductive healthcare decisions without government interference,” and asserted, “As long as I am governor, reproductive rights will be protected in Connecticut and I will do everything in my power to block laws from being passed that restrict those rights.”

In anticipation of the Supreme Court decision, the Connecticut legislature passed, and Lamont signed, Public Act 22-19, a first-in-the-nation law that protects medical providers and patients traveling from other states that have outlawed abortion. Additionally, the law expands abortion access in Connecticut by expanding the types of practitioners eligible to perform certain abortion-related care.

Tong worried that the decision will have consequences beyond access to abortion. “We need to be clear-eyed and realistic about just how dangerous this decision is for women, patients and doctors, and what it signals for every single major decision before the Court,” he said. “Make no mistake—this is just the beginning of a systematic right-wing effort to rewrite decades of bedrock legal precedent, the foundation of which is our long-recognized right to privacy in making our most personal decisions.”

He predicted “a tsunami of radical litigation and legislation aimed at further eroding rights we have taken for granted,” such as marriage equality, inter-racial marriage and access to birth control.

“We know already there are plans to push for a nationwide abortion ban should Republicans gain control of both houses of Congress,” he said. “If that happens, I will be the first to sue. … Connecticut is a safe state, but we will need to be vigilant, aggressive and proactive to defend our rights.”

Kathryn Boughton is a former managing editor of The Lakeville Journal and Canaan Town Historian, whose office is located in the Canaan History Center, formerly Catherine Roraback’s law office.