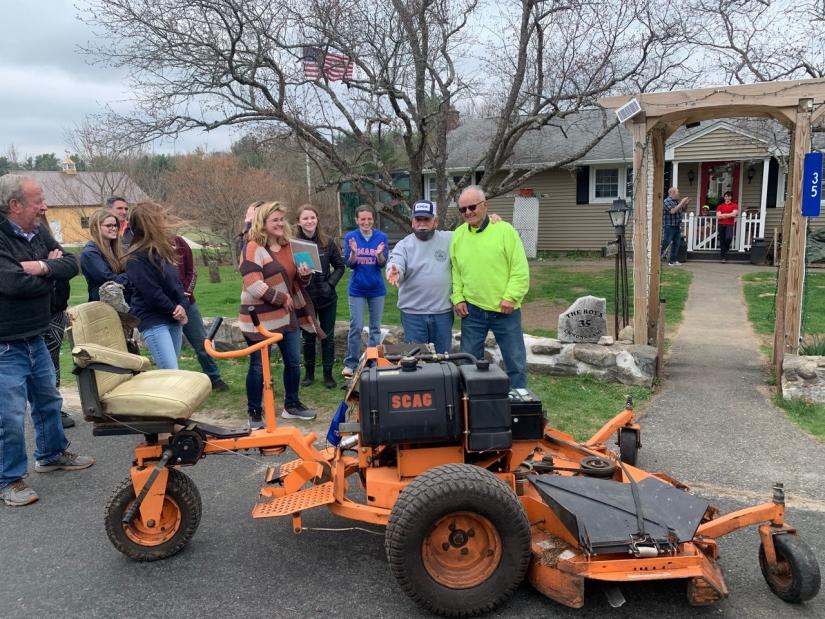 First Selectman Charles Perotti, with cap, presented Paul Roy, wearing sunglasses, with his favorite piece of equipment, a Scag lawnmower, on the occasion of Roy’s retirement from the town crew. Photo by Christian Allyn

A gift for 27 years of town service

NORTH CANAAN — The town turned out to celebrate the retirement of Paul Roy from his position with the town’s highway department, culminating with the surprise presentation of his favorite piece of town equipment. An extensive Wave Parade passed by Roy’s home on Sunday, April 11 — the final piece being the delivery of a well-used Scag mower.

Commenting on the event celebrating Roy’s 27 years of service, First Selectman Charles Perotti said on Monday morning that 75 vehicles took part in the parade, including four ambulances, six vehicles from the North Canaan Fire Department and ambulance crew (where Roy has volunteered for many years), three town trucks, trucks from the Falls Village Fire Department and their public works department, assorted local farm vehicles and lots of cars bearing well-wishers. A town truck with a trailer bore the mower to cap off the festivities.

During Roy’s tenure with the North Canaan highway department, he rose to the position of second in command.

In presenting the mower, Perotti joked that instead of a plaque that day, Roy would be presented with his three-wheel mower in exactly the condition it was when he used it: well-worn, held together with tape wrapped around the handlebars and essential bungee cords.

“He liked that one,” Perotti said of Roy’s relationship with his mower.