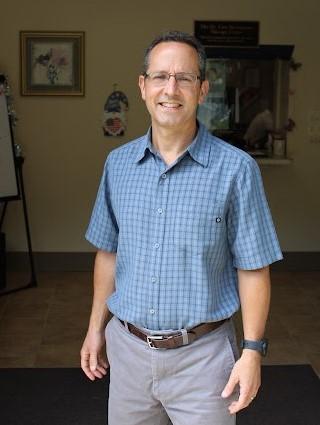 “I took a drive out there to take a look. Geer didn’t have outpatient physical therapy at the time, this I remember,” said Mangini. “I looked around and thought maybe I’d come here to work for six months.”

Six months turned into 25 years, during which time he expanded services to include outpatient physical therapy and served as the department’s director.

Then fate intervened last month when Geer Village Senior Community announced plans to discontinue its outpatient physical therapy services as part of a restructuring to focus on its core mission: its resident population.

Thursday, Sept. 15, was Mangini’s last day on the job. The next day, Geer’s outpatient physical therapy program closed to the public.

One door closes and another one opens

Over the years, Mangini, 55, had amassed a loyal following, and now the licensed physical therapist said he is opening his own private practice, Mangini Physical Therapy and Personal Training. Negotiations are currently underway, he said, to rent office space at several possible locations in town, including at Geer Village.

As of press time, a decision on the exact location had not yet been reached, but Mangini said his target opening date is Oct. 1. In the meantime, he is offering mobile physical therapy/home visits.

The physical therapist said he is hopeful that his new business could land back at Geer, as it is not only an attractive and familiar facility but is conveniently located and has ample parking. Regardless of the final site, Mangini said he is committed to opening his practice in town and serving the greater community.

He plans to work out of a new main office as well as a telehealth satellite office in the basement of his New Hartford home, and will offer mobile physical therapy options for people with limited mobility or transportation. His business motto is: “Feel Better. Move Better. Live Better.”

Mangini said his goal is to “keep it simple,” as he grows into his new business by booking no more than about eight patients daily to allow a “complete, one-on-one” session with him for their entire 45-minute appointment.  “I’ve done this for 33 years and have seen a lot of busy clinics, great clinics and lousy clinics, and know the models and what they look like,” he said. His goal is to deliver “exceptional service and a great experience,” focusing on quality over quantity.

Mangini noted that he is an out-of-network provider for commercial insurance with an affordable fee structure for a normal session. He is in the process of creating a new website.

Mangini said over the years he has become acutely aware of the difficult challenges people face in rural communities, particularly seniors, when it comes to accessing health care, a problem that has heightened since the pandemic as health care professionals leave the area and the profession.

The older population in the Northwest Corner, he said, is booming, and with a growing need for services that promote mobility, reduce pain, restore function and prevent disability for those who have suffered injury, are recovering from joint replacements or other surgeries or for those afflicted with disorders and diseases that limit their mobility.

The physical therapy patient volume has grown in recent years, spurred by a broader focus on controlling health-care costs, a growing interest in physical activities, earlier discharges from hospitals, high rates of obesity and the quest to find safe alternatives to opioids, according to the Medicare Payment Advisory Commission (MedPAC), an independent federal body established by Congress in 1997 to analyze health-care costs and quality of care.

Mangini, who has been an avid runner since high school and was inspired to enter the field after receiving physical therapy treatments as a teenager, received his Bachelor of Science degree in Physical Therapy in 1990 from the University of New England.

Mangini described the past week as an emotional one.

“I’d been working most of my career here, so it’s kind of bittersweet,” he said.