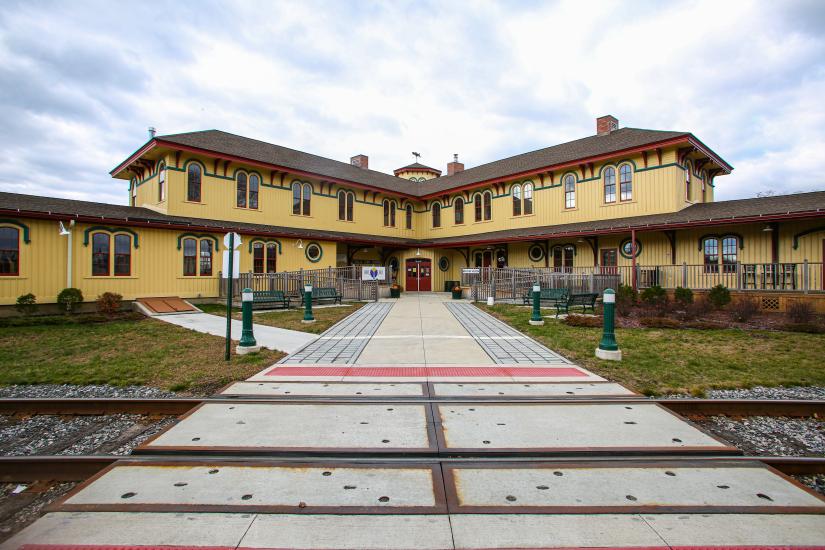 North Canaan’s beloved Union Station depot, in the center of town, is now for sale, after decades of slow-moving but meticulous restoration work following a  fire in October 2001. Photo by Randy O’Rourke

NORTH CANAAN — It is often cause for concern when a landmark in a town goes up for sale. But the new listing of the North Canaan Union Station train depot is not necessarily a bad thing, and in many ways is a really great thing.

The depot had long been central to life in North Canaan, first as a train station (built in 1872) and later as a commercial plaza with a popular restaurant.

Most of the building was destroyed by a fire inadvertently set by some area youths, only days after the terror attacks of Sept. 11, 2001. Volunteer firefighters who had gone to New York City to help in the aftermath of the attacks on the World Trade Center returned home to help put out a fire that  was similarly traumatic, albeit on a smaller scale, for this small community.

After the blaze was finally extinguished, there was only a skeleton of the formerly sprawling structure.

It wasn’t only town residents who felt the loss of the depot; it was also the many train buffs in the area, who would often make pilgrimages to a spot that brought history to life for them. Everyone agreed that the rebuild of the historic building couldn’t happen fast enough.

Unfortunately, fast was not a word one could use to describe the process of getting state and federal funding, beginning the renovation and then completing it. It all took years and years longer than was hoped or expected.

The building had been owned privately at the time of the fire. The only way to get the federal funds (through a transportation grant) was for ownership to be transferred to a nonprofit, with funds administered by the town government.

The property was transferred to the Connecticut Railroad Historical Association, whose chairman is former First Selectman Doug Humes. The other three trustees on the society’s board at that time were Bob Gandolfo, Robyn Walsh and Leroy Riva (whose son Bob took his place after Leroy passed away).

Many town residents and officials took on the task of trying to get the work completed over the years, including Selectman Charlie Perotti, who was one of the first firefighters on the scene on that October night in 2001 and who is now the town’s first selectman.

The official groundbreaking for the restoration was in September 2016. But even then, one delay followed another. What was expected to take 240 days from start to finish took more than a year.

A solid tenant
in place

Work was finally completed, for the most part, in 2018. The first commercial tenant in the building was Chris Tripler’s Great Falls Brewery, which has settled nicely into the space and has developed a devoted clientele, despite the pandemic and the quarantine.

The brewery still has a 10-year lease, according to John Harney Jr., who is the listing broker for the property, representing William Pitt Sotheby’s International Realty.

There are other rental spaces in the building, Harney said, including a second floor space that could be a rental residence.

Harney, who grew up in the Northwest Corner, understands the history and importance of this anchor of the town. He credits Gandolfo, Riva and the many others who never gave up and who helped get the property rebuilt and ready for new tenants and a new owner.

“When I see what they have done, it is amazing, a testament to civic pride in North Canaan,” Harney said. “And the grit it took, to see it through over the many years it took to complete the project. They spent more than $3 million on the renovation, which can easily be seen in the quality of the workmanship and the attention given to restoring a historic building.”

The depot is being offered for sale for $1.2 million.

According to the online listing for the property at (www.williampitt.com, 75 North Main St. in North Canaan, Conn.), it is on a little less than a full acre. “The restored depot is a mixed-use building incorporating a railroad museum, a brewery and a number of available office or retail spaces.”

At the center of the building, connecting the two wings, is the Connecticut Railroad Historical Association’s railroad history museum, on two floors.

The online listing promises that, “The site is improved with wrought-iron fencing, teardrop lamp post lighting, and a concrete and stone masonry walkway which gently inclines to the front entrance of the building improvements.

“Landscaping at the site consists of manicured lawns, shrubs around the building, planting beds with flowering plants and interspersed trees.

“It is evident that much time, money and community effort and pride has gone into this project.”

As for Perotti, who put in so much effort himself on the property, he said he’s sad to see it go up for sale, but feels it’s necessary. The Railroad Historical Association took ownership simply to shepherd it through the renovation process.

Doug Humes was also there on the night of the fire and has coaxed the project through to this point. He said the restoration of the depot has always had two main goals:

“To preserve history and to revitalize downtown North Canaan.”

To be part of that process and to learn more about the property, call John Harney Jr. at 860-921-7910 or email him at jharney@wpsir.com.