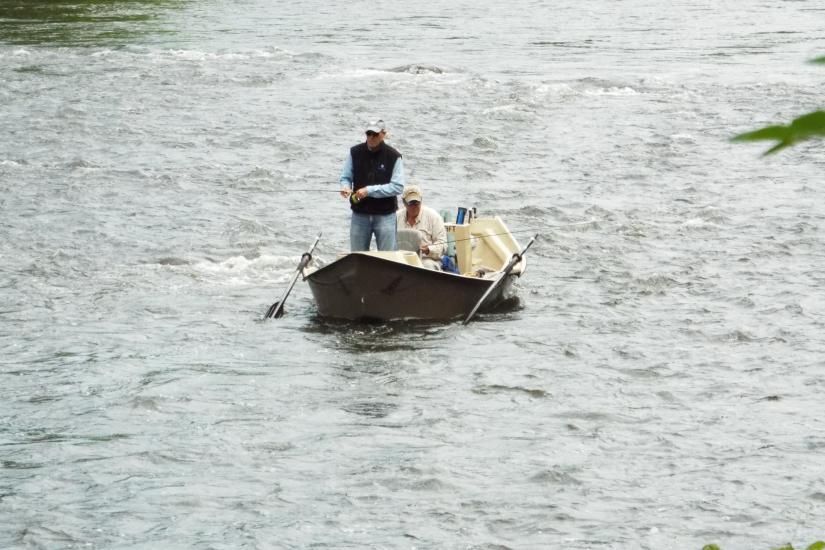 A guide took a client fly-fishing on the Housatonic River last year. PCB pollution remains a major problem on the river.  Photo by Patrick L. Sullivan

NORTH CANAAN — Lynn Fowler does not mince words when it comes to describing the decades-long efforts to reclaim the Housatonic River system from years of neglect and PCB contamination originating from the General Electric Company (GE) facility in Pittsfield, Mass.

“Unfortunately, the Housatonic has been marinating in PCBs since the early 1930s. It’s a very sad story, and don’t expect that there is going to be a happy ending,” she said during a recent interview.

As one of two North Canaan representatives on the Housatonic River Commission (HRC), Fowler has been giving monthly updates to HRC for the past 22 years on the struggle to remove the long-lasting polychlorinated biphenyls, or PCBs, from the river’s sediments, floodplain soils and groundwater.

The Housatonic was polluted when PCBs were released into the river from 1932 until 1977 by GE. The PCBs migrated downstream through Connecticut and into the Long Island Sound. The man-made toxins, which are resistant to biodegradation, are present in large quantities in river sediment and floodplain soil to the tune of between 100,000 to nearly 600,000 pounds of PCBs, according to the federal Environmental Protection Agency (EPA).

Most of the contamination is found between the confluence of the East and West branches in Pittsfield and Woods Pond Dam in Lenox, Mass., and farther into Rising Pond in Great Barrington. Currently, more than 50% of the PCBs that enter Woods Pond go over the dam and continue downstream, into Connecticut, a distance of approximately 140 miles, according to the EPA.

Although PCBs were banned in the United States in 1979 under the Toxic Substances Control Act, the carcinogens won’t be gone anytime soon — if at all. And neither, it appears, will litigation seeking a more stringent remedy.

If there is a positive chapter in the PCB saga, said Fowler, it’s that GE is being held accountable to the states of Massachusetts and Connecticut, the EPA and other environmental groups and affected landowners under an extensive remediation plan.

Fowler’s comments were in response to the March 1 announcement that the EPA has issued its final permit decision obligating GE to perform a cleanup of the Rest of River portion in Massachusetts and Connecticut.

“The communities along the Housatonic deserve access to a river free of threats posed by PCBs and issuing the final permit today is a big step towards that cleanup goal,” said EPA Regional Administrator David W. Cash in making the announcement.

“It’s really not a clean-up, it’s a remediation,” noted Fowler of the EPA/GE agreement. “You can’t clean up toxins like PCBs or mercury. They remain forever,” causing permanent harm throughout the local ecosystem. The PCBs have impacted aquatic organisms and their habitats, as well as fish and wildlife that consume contaminated organisms, she said.

‘One chance in history to get this right’

Not so fast, say two environmental watchdog groups that are calling for more stringent cleanup and for the treatment of PCB-contaminated soils and sediments and are gearing up for a second appeal to the EPA/GE permit, this time in federal court.

“Right from the beginning we knew, 15 or 20 years ago, that the culmination for fighting for the river would end up in Federal court,” said Timothy Gray, executive director of the Housatonic River Initiative (HRI), a nonprofit coalition of Massachusetts and Connecticut environmentalists, sportsmen and owners of contaminated properties. “And here we are.”

The environmental groups had hoped to block the EPA’s plan to dispose of toxic material at a proposed 20-acre landfill in Lee, Mass., arguing that the EPA should instead be looking at new technologies for the cleanup that would break down PCBs, rather than removing and dumping them.

The environmentalists lost their appeal, and on Feb. 8, the board issued a 122-page ruling in the EPA’s favor and giving a green light for the Rest of River cleanup plan to proceed. In the decision the judges determined that the groups failed to prove that the EPA “clearly erred” in its remediation proposal. Gray said in an interview on March 23, that a new legal appeal by HRI and HEAL is imminent.

“Our town is just really in a bad place right now,” said Gray. “The dump is 1,000 feet from the banks of the river, and 1,000 feet up in the air on top of a hill. That’s where they are going to build it. We have one chance in history to get this right, and we are not getting it right.”

The environmental groups also argued that Connecticut should be included in the final agreement.

And so the legal wrangling continues. “We are gearing up for federal court, where we have a better chance of winning. One of the things we are challenging in Connecticut is the notion of Monitored Natural Recovery. It means do nothing, and sample every 15 years,” Gray said. “We are asking the court for a re-review of everything. In Connecticut, the Housatonic Environmental Action League is pushing the right buttons for Connecticut, whereas the state is not.”

“Does that mean dredging up the entire river in Connecticut? Absolutely not, but there are problem areas we should be addressing if we really want clean waters again,” said the environmentalist. He pointed to areas around Bull’s Bridge in Kent and Lake Lillinonah as locations that can benefit from PCB remediation.

“Connecticut residents,” noted Fowler, “should be reminded that there is no clean-up phase planned for Connecticut at all. Ever.”

James Fowler, spokesman for the Connecticut Department of Energy and Environmental Protection, (and no relation to HRI’s Lynn Fowler) said the remediation efforts specified in the EPA’s Rest of River plan “should have a positive effect on PCB levels downstream in Connecticut. These efforts should reduce risk for people and for wildlife.” But until all PCB sources are eliminated, he noted, “there will continue to be varying levels of contamination in Connecticut.”

Currently, there are 125 fish consumption warning signs, in two languages, posted along the Connecticut stretch of the Housatonic. According to Lynn Fowler, the state is currently renegotiating with GE to make the company responsible for maintaining the signage in Connecticut.

William Tingley, chairman of the Housatonic River Commission, said he sees the final EPA ruling as a step in the right direction. He said the issue of PCB contamination has been “a permanent fixture” on HRC’s agenda for decades and expressed optimism that the Rest of River plan will have a positive impact in Connecticut in the future.

“We are very interested in terms of how it affects our own water quality and meeting the standards we’d like to attain. The good news is that, overall, there have been some positives out of this in terms of eliminating, or at the very least lessening, the source point of pollution in Pittsfield. The restoration that was done up there is good stuff.”

What progress has been made?

In 2000, a settlement was reached requiring GE to pay more than $15 million in damages, split evenly between the states of Connecticut and Massachusetts. Those funds were earmarked toward financing restoration projects in both states.

According to the EPA, cleanup of PCBs and other hazardous substances in Pittsfield and the Housatonic has progressed under an October 2000 Consent Decree entered into by EPA, Massachusetts, Connecticut, the City of Pittsfield, GE and the Pittsfield Economic Development Authority.

Cleanup was required for 20 contaminated areas outside the Housatonic River, five groundwater management areas, and three river segments: the Upper ½-Mile Reach, the 1.5 Mile Reach, and Rest of River. The remediation of the 20 non-river cleanup areas and the first two miles of the Housatonic are complete, according to the EPA, and GE is conducting all required post-removal site control activities including inspection, monitoring and maintenance activities at these sites.

The EPA cleanup plan for Rest of River is estimated to take 13 years of active remediation. Remediation is expected to begin about two years after all appeals are resolved.

Gray said he is optimistic that the impending legal challenge, which they must file within 90 days from the EPA’s March 1 ruling, will yield results. “The wonderful thing is that we have been blessed by having the best environmental group in the Berkshires working for us pro bono. It doesn’t mean we are going to win, but it gives us a chance.”

Lynn Fowler noted that the EPA and GE are “moving ahead, in spite of the fact that there could be future legal cases against them. They have plenty to do to set the stage” for the EPA-approved Rest of River remediation, she said, including an infrastructure plan that could take up to two or three years and more than a decade to implement.

In the end, there’s no disputing that the Housatonic, which is currently seeking federal Wild and Scenic status, is a “massive, beautiful river” known near and far for its exceptional recreational value and scenic beauty, she said. “It’s just that it’s still a sad story.”