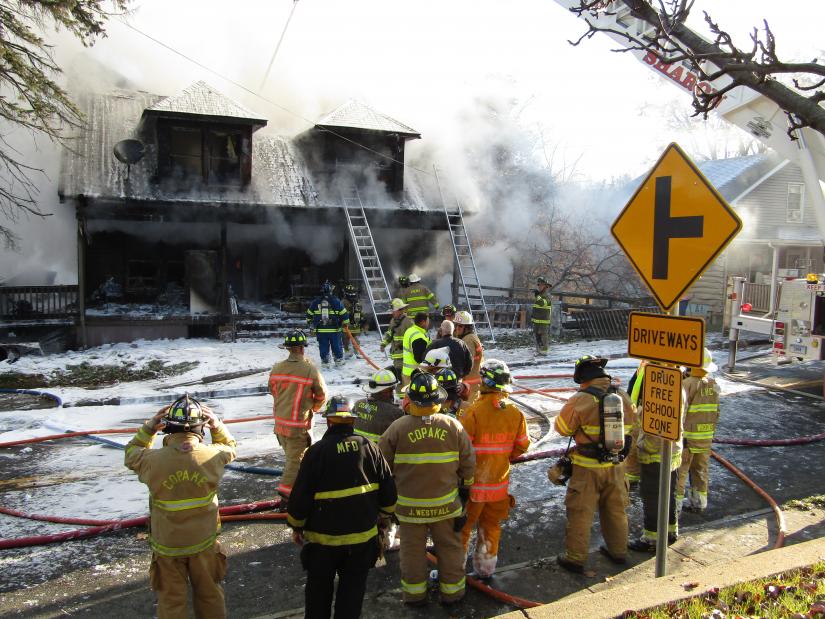 MILLERTON — What began as a serene Saturday morning in the village of Millerton took a turn for the tragic as multiple area fire companies rushed to the village in response to a horrific house fire at 5902 South Elm Ave. (Route 22) on Saturday, Nov. 6.

Two people were reported to have lost their lives inside the home. At this time, the  names of the victims are not being released.

A prepared statement issued by the North East Fire District on Sunday afternoon, Nov. 7, stated the Millerton Fire Company was dispatched to the scene at 7:58 a.m. in response to a report of a possible house fire with people trapped inside.

Local residents could spot the billowing clouds of smoke from miles away, some of whom reported hearing people screaming to get out.

The closer onlookers got, the more horrific the scene became. Dark smoke emerged from the house and the harsh smell of smoke escaped the home as it quickly became engulfed in flames. Neighbors stood on their lawns and front porches and watched the devastation unfold, while a handful of local officials stood on the grass, worry lining their faces.

David Runge resides nearby on West Street. He said he and his family were having a cup of coffee around 8:04 a.m. when they saw the flames shoot up in the sky. Standing across the street from the burning house, Runge said, “Let’s hope everybody got out OK.”

According to the North East Fire District’s statement, Fire Chief Jason Watson arrived within four minutes of the 911 call being dispatched and found the house fully engulfed in flames, with a report of two people still trapped inside the structure.

The Pine Plains Hose Company was on stand by at the Millerton fire station.

Once the first fire engine arrived on scene it immediately began using compressed air foam to suppress the fire.

Reflecting on the events of the fire, Fire Commissioner Joshua Schultz said this is the largest fire the North East Fire District has responded to in years.

“It’s not my first fatal fire,” Schultz said, “but it is definitely one of the worst the first district has responded to.”

“He had everything organized; had the mutual aid that he needed, had all the bases covered.”

Both the cause and origin of the fire are currently being investigated by the Dutchess County Fire Investigation team, which was on hand early Sunday morning and for much of that day, along with the New York State Police and the Dutchess County Sheriff’s Office.

A Go Fund Me page was set up by Millerton resident Monica Baker at around 7 a.m. on Sunday morning, Nov. 7, and its initial goal was $10,000. This goal was surpassed around 10:30 a.m. and the goal was increased to $20,000, which was also exceeded early Sunday afternoon. The need was described on the page: “Please support a Millerton, N.Y., family who experienced a tragic house fire. Amy Yang is a local business owner and mother of 4. The house fire has inflicted unimaginable pain and loss on Amy and her family. Tragically, the Yang family already lost their father when he passed away suddenly a few years ago. Now more loss. They need our support. Please help in any way you can.” Here is the link to the page: https://www.gofundme.com/f/support-the-yang-family-after-devastating-fir...

Amy Yang is the owner of the Chinese restaurant in Millerton, the Golden Wok, located  at Railroad Plaza near the intersection of Main Street and Route 22.

A sign was posted on the restaurant’s door announcing Golden Wok would be closed until further notice. Devastated by the events of the past 24 hours, Yang chose not to comment on the fire.