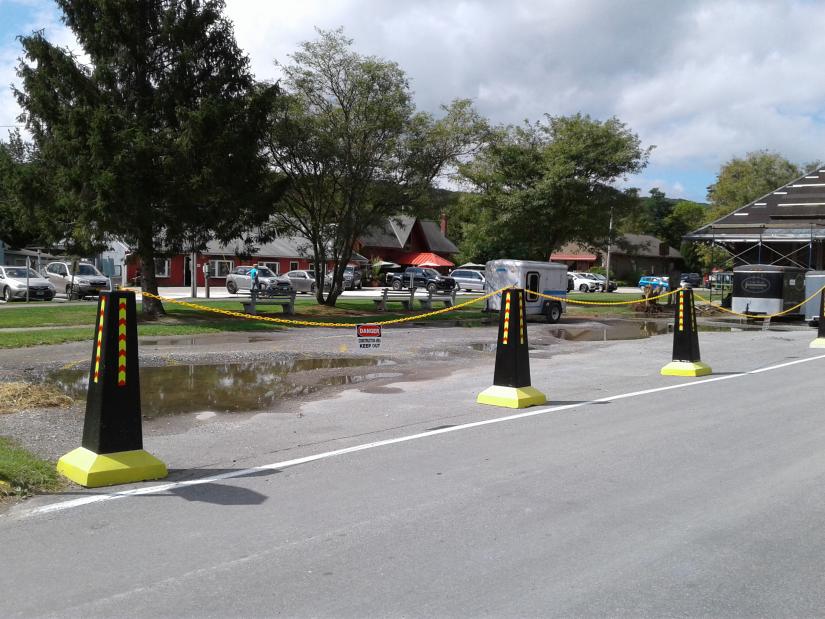 The Steed Real Estate parking lot at Railroad Plaza in Millerton was cordoned off this summer, angering many in the village, especially merchants who rely on all available parking for their customers. Marti Steed said she and her husband, Ron, had to protect workers restoring the building, and many of the components in the unpaved lot. Photo by Kaitlin Lyle

The wheels are in motion for Railroad Plaza to be restored

Why is precious Main Street parking blocked off?

MILLERTON — Drive onto Main Street into Millerton, and it would be difficult for motorists to miss the row of bollards leading from Steed Real Estate at Railroad Plaza (technically 9 North Center St.) to the end of North Center Street.

Though the bollards have been raised as a topic of discussion among village and town officials and especially merchants — particularly in regard to the loss of precious parking in the village business district — Marti and Ron Steed of Steed Real Estate have said the posts used to divert traffic are there for good reason. Their building, a one-time train station in the village that was founded around the railroad industry, is under construction.

There are about 13 parking spots in front lot, roughly eight parking spots in the rear, plus another seven or so cars can park alongside the building, according to Marti. The lot itself is unpaved, she added, as they need “to allow for percolation” of the septic system.

The Steeds purchased the building in the center of Millerton’s Railroad Plaza in 1978; their real estate business has been active since 1976. Marti said they’ve wanted to restore their building for five years, but have been waiting for their son, Jason, to take a look at it.

As owner and president of Steed Home Real Estate, Marti said her son mostly works on restoring older properties, and while everything’s fine in regard to their historic building, she said “structurally, it needed his touch.”

Construction started on the Steed property around the end of August and the bollards were installed in the parking area a few weeks later. Marti explained they were are to protect the construction crew as well as the building from being hit by Millerton’s heavy traffic, which draws cars and trucks from New York, Connecticut and Massachusetts.

There’s also the matter of protecting the building’s septic, underground wiring and electrical work, which are buried below the parking lot.

When asked about the time line for the restoration, she said it really depends on when Jason — who is working as the contractor — can get to it. Before addressing larger issues like the roof, Marti said workers have to repair the underlying architectural design, the gutters and parts of the building that have previously been hit by trucks.

In the meantime, she said they have to keep the bollards available in the parking lot for whenever the construction crew can work, which she said has been impossible given the amount of traffic traveling in and out of Millerton, heaviest on weekends.

“We’ve allowed people to park in the parking lot for years and now we need to have it available whenever we need it,” Steed said.

With construction now underway, village officials have shown their support for the Steeds’ plans to restore the  building, but they’ve also expressed their concern about the reduced parking in the village, already short on spaces.

“The board is very concerned about the loss of parking,” said Millerton Trustee Laurie Kerr. “We’re also happy about the restoration of the old train station, and we understand that spaces are needed to accommodate that work. That said, we’re hoping to reach a long-term solution that works for everyone.”

“It’s great to see them continue to restore the building and work on that, and that’s a good sign for downtown Millerton,” said Mayor Jenn Najdek.

Having spoken with Ron Steed about the construction work, Najdek said he mentioned they had to do some drainage work and once done, the bollards would be moved back and potentially the parking will be opened up again.

As manager of the Oakhurst Diner — a business that has used the Steed parking lot for its customers — Jess LeJeune commented that the bollards have “definitely hurt our parking and business on the weekends.

“I feel people just drive around looking for parking and give up, so I think maybe it’s been a little less busy,” she said.

Apart from that, LeJeune said they’ve been fairly busy at the diner with the only complaints coming from customers curious to know why the bollards are blocking parking spots that previously were available to them.