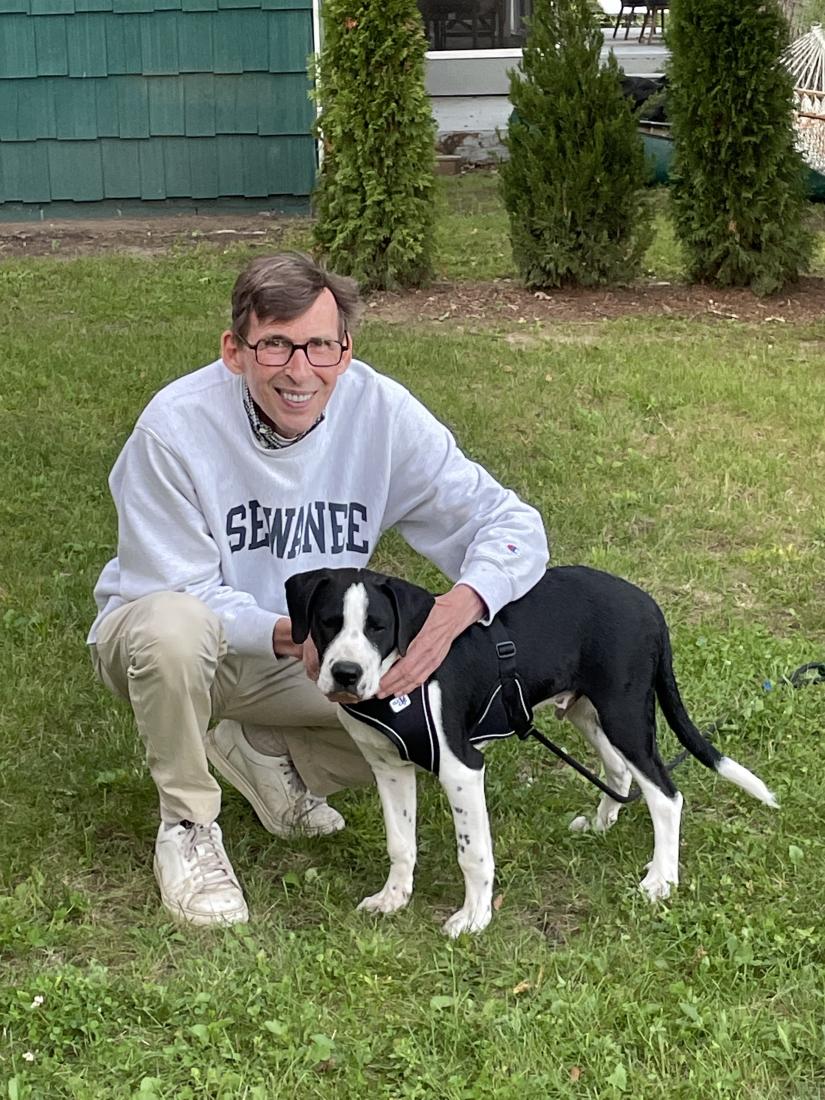 The late Jeffrey Hane of Millerton loved his dogs, as was observed by those who had the pleasure of seeing him walk Hugo, shown above with Hane, around the village. Photo submitted

What Millerton meant to the late Jeffrey Hane

May 18, 2022
By
Kaitlin Lyle
kaitlinl@millertonnews.com

MILLERTON — Though his time in Millerton was brief, the life of Jeffrey Hane was, by many accounts, extremely happy to live in the village. He passed away Monday, April 25, at the age of 61 following an 11-day battle on life support after the community pulled together to save his life.

Though his identity wasn’t disclosed at the time due to Health Insurance Portability and Accountability Act (HIPAA), Hane was the Millerton resident who suffered a cardiac arrest on Friday, April 15.

The Millerton News ran a front-page article of the Millerton police, fire department, ambulance crews and even neighbors pitched in to perform CPR to save his life.

Reminiscing about Hane’s two years in Millerton, his friends came forward to speak about the love he felt and received from the local community in the last years of his life.

Remembering how Hane first fell for Millerton, Ancramdale resident Chris Kissel said his friend spent Christmas in Ancramdale with him and his husband Don Nienas in 2019. At the time, Hane was living in Queens; he had lived around the country and all over the world, including Hawaii; Washington, D.C.; Philadelphia; and San Francisco. During his two weeks he spent in Ancramdale, Hane fell in love with the Harlem Valley.

Unbeknownst to him and Nienas, Kissel said Hane bought a home in Millerton in January 2020. The sale went through just as the COVID-19 pandemic hit, with Hane closing that June.

From the moment he arrived in Millerton, Hane told his friends he felt welcomed by the warmth of the small village. When he and his beagle Charlie moved into their new home on North Maple Avenue, his neighbors gave him furniture to help furnish the place.

With Charlie by his side, Hane formed a close bond with his neighbor Beverly Churchill, who took care of Charlie whenever Hane was away. The pooch would so frequently visit Churchill’s house it inspired her to create a pathway between the two homes, which she dubbed “Charlie’s Way.” The path remained even after Charlie’s passing.

Hane’s love for his dogs was noticed by many who saw him walk Charlie, then Hugo, around the village or sit with together on his porch. Though they only knew each other a few months, his neighbor Kim Sloan,  a traveling healthcare provider, said they hit it off immediately and their dogs became good friends.

Beyond the people, Kissel said Hane loved Millerton’s merchants. He enjoyed dinning at the Oakhurst Diner,  Taro’s and 52 Main, calling it “a real treasure,” where he celebrated his 61st birthday on April 6. He relished shopping at the NECC Farmers Market and throughout the village.

“Jeff had planned to live out his life in Millerton once he retired,” Nienas said. “It was the first home he ever owned and he was getting great pleasure from renovating it in phases as his budget allowed.”

On the night of Friday, April 15, Sloan said she stopped by Hane’s home to discuss plans for Hugo’s birthday. While talking, Hane complained of heartburn and Sloan went to CVS to pick up Tums. Though the Tums seemed to help, Sloan found Hane slumped in his chair moments later.

With her phone beside her she called 911, got Hane on the floor and started CPR at the same time. Within four minutes of dispatch, Millerton Police Department Officer-in-Charge Mike Veeder was on the scene and took over the resuscitation attempts, aided by an automated external defibrillator.

Kissel said Veeder was able to restrain Hugo while calling for emergency services, meanwhile another neighbor arrived to assist.

Hane was transported to Sharon Hospital in neighboring Connecticut in critical condition; he was later transferred to Danbury Hospital.

Kissel said Hane was on life support and different interventions were used to wake him up.

Even in the midst of their heartbreak, Hane’s friends were candid about his life in Millerton, wanting to preserve his memory.

“He was thrilled that he had moved there,” Sloan said. “He fell in love with the community and made several friends. Everyone is just heartbroken over this.”

“He was bigger than life, he was so happy,” Churchill said. “I never heard a harsh word come out of his mouth.”

Taking care of Hane’s house in the days following his death, Churchill was given the “Charlie’s Way” sign by Hane’s family.

“He hadn’t been there that long and he touched people so deeply,” she said. “That’s why he’s so special for all of us.”

“It took the village to make this happen… this is the happiest I’ve ever seen him,” said a grateful Kissel. “They gave him a great end of his life and everyone rallying together at the end was just amazing and so touching. We are very much indebted to the community and Jeff would be so proud. They really made the end of his life something special.”