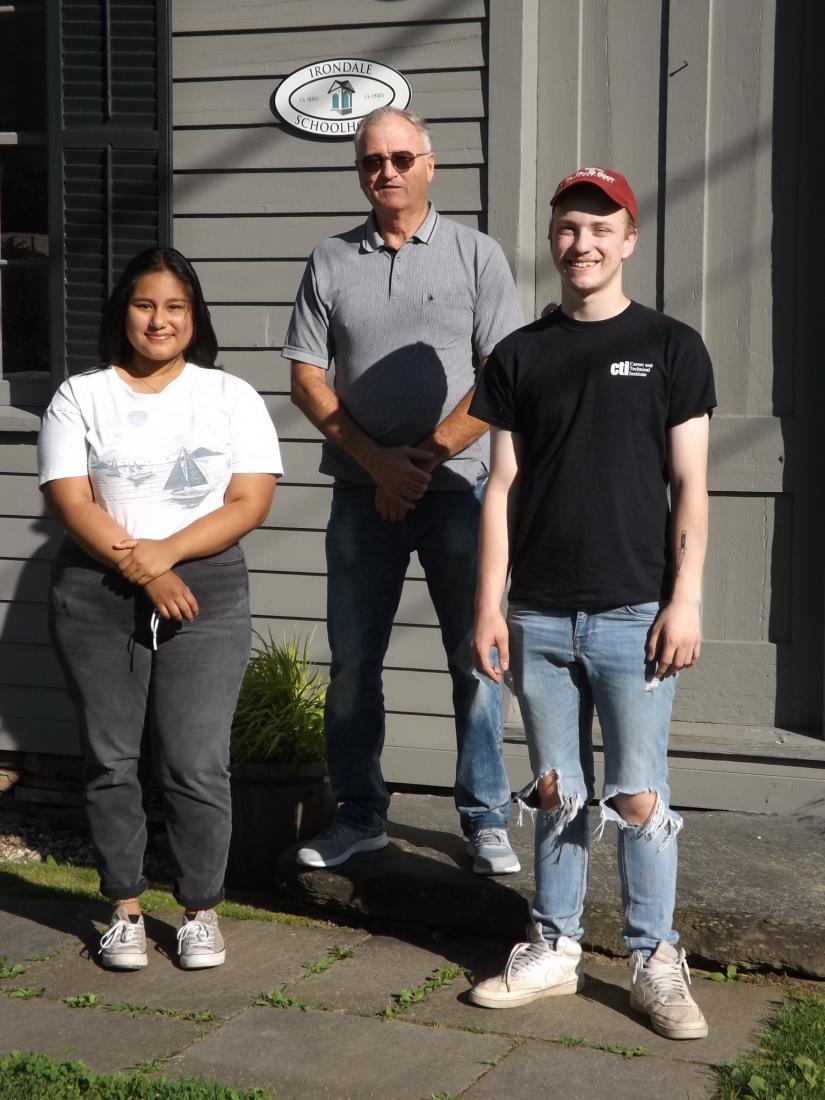 Friends of the Irondale Schoolhouse Board Trustee John Brunese, center, congratulated Daisy Matus and Liam Lynch as the recipients of this year’s Irondale Schoolhouse Scholarship in front of the one-room schoolhouse at the head of the Harlem Valley Rail Trail in Millerton. Photo by Kaitlin Lyle

MILLERTON — Two local scholarship winners of the Irondale Schoolhouse Scholarships have simple but important advice for rising seniors who will soon be facing a year of college applications quickly followed by hefty tuition bills — the cost of pursuing their dreams.

Then apply early and apply often.

Webutuck graduates Daisy Matus and Liam Lynch were each able to garner at least seven scholarships to help ease the costs they will face as they continue their education at “The Next Level.”

Matus, Webutuck’s 2021 valedictorian and a self-described procrastinator, said she did work early in the year on scholarship applications but in the end put off writing her essay until shortly before applications were due, something she does not recommend.

“It does take  lot of work — there’s no doubt in that,” she acknowledged. “However, most of the scholarships can be a bit repetitive, so you can reuse essays and other material. Getting started is really nice because it gets you motivated knowing that you could possibly earn some money.”

When submitting essays, however, it is important to remember that scholarships are often created by groups with special interests and to respond appropriately to that.

For example, Friends of the Irondale Schoolhouse Board Trustee John Brunese, who created the schoolhouse’s scholarship program, noted that while awards are based on academic achievement, community service and financial need, Irondale evaluators are also interested to know how applicants feel their “classwork can relate to early education in a one-room schoolhouse,” similar to the historic 1858 Irondale Schoolhouse that sits at the Main Street entrance to the Harlem Valley Rail Trail in Millerton.

As for students for whom graduation is someplace off in the distant future, it’s never too early to start building the sort of resume that will eventually impress those in charge of doling out the dollars.

Grades matter, but so does the way time is spent. Both winners of the Irondale Scholarship showed they were willing to help fund themselves by holding down part-time jobs.

Lynch, who will be attending the acclaimed Culinary Institute of America in nearby Hyde Park, has gained experience at the popular Harney’s Tea Café on Main Street in Millerton,  work he plans to continue as he pursues a four-year program in Food Business Management.

Thinking “big,” he has plans to eventually open his own chain of restaurants after gaining more experience, possibly with a corporate food concern.

In addition to her job at Silamar Farm, also in Millerton, just south of the village on Route 22, Matus was class vice president, a member of student council, mock trials,  honor society, yearbook and the music program.

With a slight laugh she noted that even though she doesn’t plan to continue the last focus in college, one of the scholarships she received was for music, proving everything students do matters.

Earning too many scholarship to list, including several from the prestigious Rochester Institute of Technology where she will study biomedical engineering, Matus was adamant that students should apply for as many awards as possible, especially local ones such as Irondale’s, because she believes the odds of getting those are better.

Lynch’s advice is more succinct but equally apt: “Just do it. Do it fast.”

Equally important advice: Do it through the school’s free guidance office rather than wasting money on fee-based online sources.