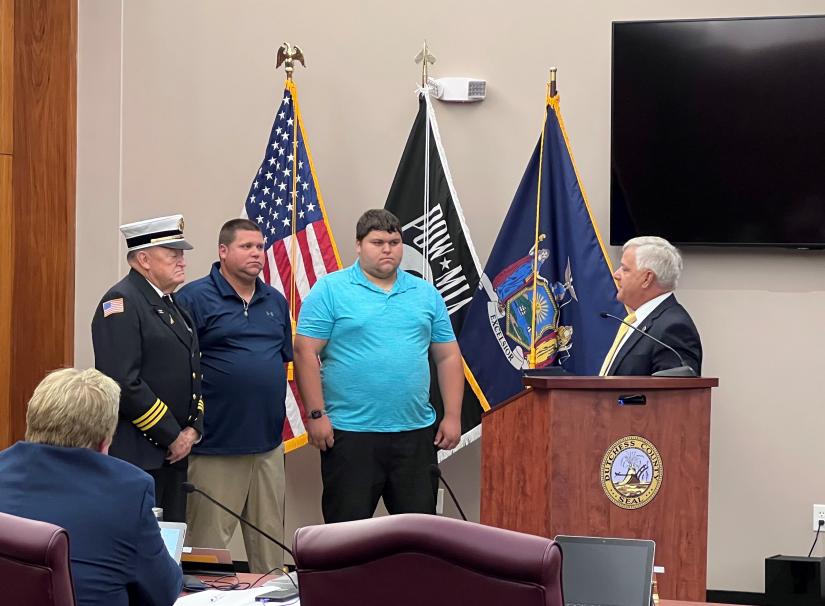 Watsons honored by county after saving an infant’s life

On Sept. 12, Jason Watson and his son Shane Watson were recognized for the life-saving rescue made on Aug. 8.

Fire Chief Watson said the MFC received a call for an infant in distress from a home in the town of North East. When he and his 21-year-old son arrived on the scene, they found the infant “was blue” and having a seizure.

“It was crazy,” he said. “It was pure adrenalin… I’m very grateful, because it was a good outcome.”

“We took the baby from the mother, and Shane did the compressions and I did the breathing,” he recalled. “It took less than a minute to resuscitate.”

Once revived, the child was transported by ambulance to Sharon Hospital.

Chief Watson said getting a call about an infant in distress can be hellish.

Watson reported the infant was declared fit and healthy, and was released from the hospital the following day. While he noted there was “a language barrier” between emergency responders and the parents, it was clear “they were grateful.”

The fire chief added while such calls seldom come into the fire station, it’s critical that volunteers be prepared.

“All of our training has paid off with our CPR classes,” he said, noting “the North East Fire District [NEFD] has not always required it.”

It does currently, and has for the past two years.

“Every member is required to have CPR and Automatic External Defibrillator (ADD) training,” said Watson, adding the NEFD provides CPR training for its volunteers.

However, he noted some districts still don’t mandate CPR training. Watson strongly encourages not only emergency workers to know how to perform CPR,  but for everyone to learn the life-saving skill.

Watson recalled an incident about three years ago when a woman stopped breathing at a birthday party for his son’s friend, Stone Scasso. At the time, Stone, along a friend Daniel Swift, jumped into action and performed CPR on the woman. Watson said they saved her life with their know-how.

“All three [Shane, Stone and Daniel] were in the Webutuck CPR class,” said Watson. “I thought it was a great idea, great idea.”

Along with responding to the scene as the fire chief, Watson said he could appreciate it from a father’s perspective. He spoke of how he felt saving the infant’s life aided by his own son.

“There are no words that can explain how proud I am,” he said. “The training pays off.”

The two generations of Watsons received certificates from the county, presented by Chair of the Legislature Gregg  Pulver (R-19).

“I’ve been in the EMS world a long time with my involvement with not only the Pine Plains Rescue Squad but with the National Ski Patrol,” said Pulver, “and I know how hard it is to deal with some of these issues. But to do that with a 2-year-old is phenomenal; the amount of professionalism they showed, especially Jason’s son, is absolutely amazing.”

Pulver noted that dealing with an infant in distress is among the most challenging calls an emergency responder can receive.

“It’s the hardest thing anybody, in any shape or form, can do,” he said. “I’ve had a lot of good EMTs, and people just can’t handle it. The fact that they did is a credit to their training and their resolve to make sure there would be a positive outcome.”

Like Watson, Pulver advocates for CPR training to be required by all fire districts and also to teach it to students in school.

“I am amazed that the world doesn’t have a CPR card,” he said. “I know a lot of schools do it, Pine Plains does it, they teach a CPR class. I think everybody should have it, especially first responders.”