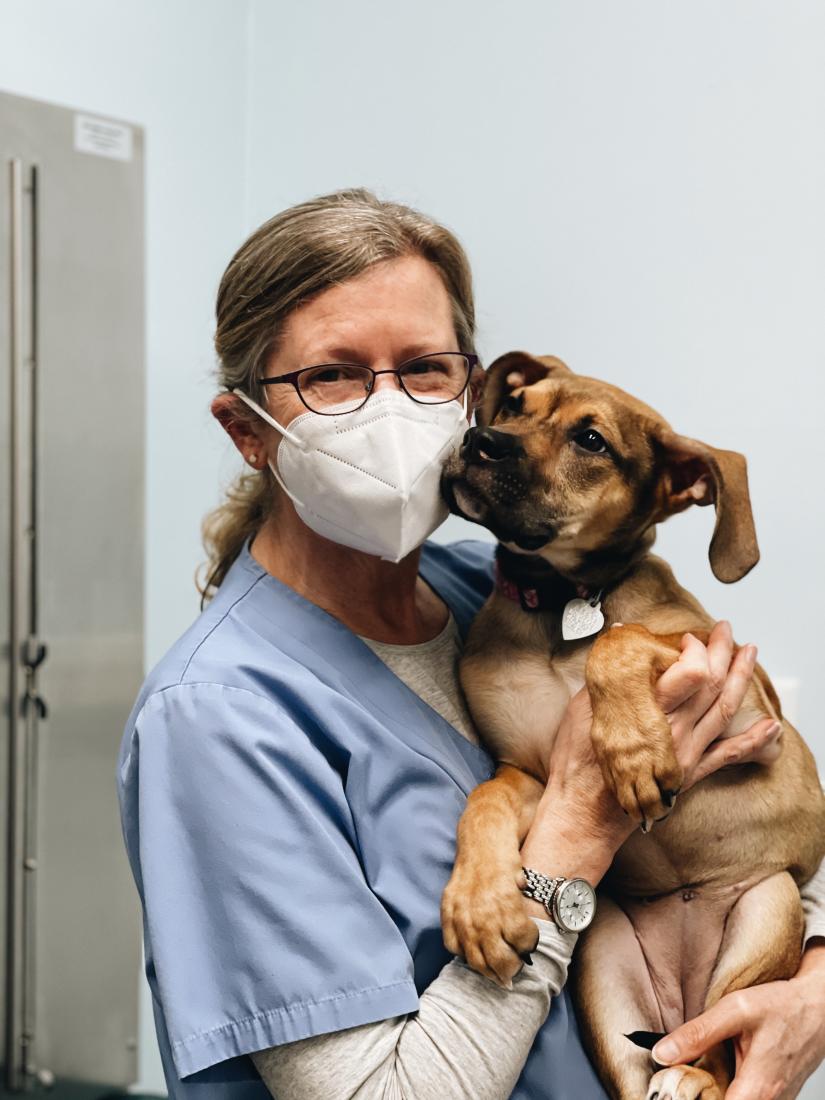 Dr. Carolyn Cannon, DVM, of the Millerton Veterinary Practice, with her patient, pup Sadie (whose owners are Candie and Eric Fredritz of nearby Sharon, Conn.), strongly encourages all pet owners to invest in the low-cost and safe microchipping process that tracks a pet’s identification and location if the pet gets lost. It can be the one thing that quickly and reliably reunites animal and owner with the least amount of headache and heartbreak. Photo submitted

Vet says tech can be a pet’s best friend

MILLERTON — Lost pets have been a heartbreaking problem since the days when a young caveman appeared at the entrance to his home, a sabre tooth tiger trailing behind him as he begged to keep the creature who eventually, sadly, wandered off, never to be seen again.

Through the ages, owners of stray critters have tried everything to find them — from word of mouth to posters to newspaper ads to email appeals such as those sent out regularly by Ancram town Supervisor Art Bassin to online pet lost and found sites. One of the last recently allowed an appreciative owner to retrieve the now locally famous Austrian German shepherd named Andy, who was nearly lost to an icy pond in Ancramdale. Andy was featured in the Jan. 21 issue of The Millerton News for the heroic rescue that saved her life by a Columbia County Sheriff’s sergeant. Unfortunately, such methods are often hit or miss, and depend on a great deal of luck.

But according to Dr. Carolyn Cannon, DVM, of the Millerton Veterinary Practice, these days technology provides a reliable means of retrieving a lost pet — through implanting a microchip.

“If your dog [or cat] is microchipped, we can find out who owns that dog [or cat] within minutes,” said the veterinarian.

Rather than acting as a tracking device, the scannable chip stores an identification number used nationally to identify the pet. Because there are no power sources nor moving parts, it generally lasts the lifetime of the animal.

Dr. Cannon said many places, including veterinary hospitals, the Humane Society and most animal shelters have scanners to read the devices, so the chances of getting a missing dog or cat back are very high, as long as the device’s registration is current.

The procedure embeds a tiny microchip about the size of a grain of rice in the loose skin at the animal’s shoulder using a simple syringe that contains the chip. It takes just a few minutes with the patient returning home that day. The simple procedure is frequently done when a pet is being spayed or neutered.

The initial cost is approximately $70, which includes the device, its insertion and the first year of registration with the tracking organization.

Cannon added that with some companies, including the one used at her hospital, “you get not only all of this help finding your dog [or cat], you also get a little bit of health insurance if something happens to your dog while it’s away. You also get free access to the animal poison control hot line, which costs $75 every time you call. That’s a big plus and I try encourage people to do it for that reason alone.”

That service can be critical, she said.

“If [a pet] eats a little piece of chocolate or more commonly now it’s that xylitol gum, you have to call animal poison control because they have very specific formulas depending on what type of dog you have or how much they weigh,” said Cannon. “It’s really wise for people to understand the benefits.”

She added that many animals adopted from shelters already have the microchips implanted because the chip companies often donate them, but unfortunately some owners do not pay the annual $20 fee that keeps the registration current, so often they are not activated. Some pet owners also neglect to provide updated contact information to the microchip companies when they get a new phone or if they move, which can result in owners and chipped animals who get separated from each other from ever reuniting. And that, said the doctor, is not only a tragedy, but a preventable one.