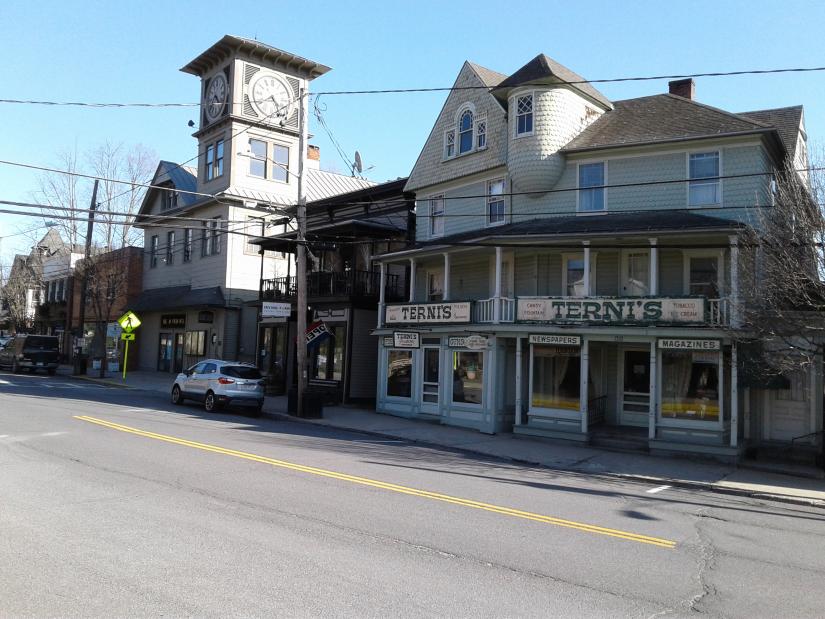 The Terni’s building at 42 Main St. in Millerton was built in 1909. It was just purchased this July by three investors who plan to “make her shine” again, according to investor Jason Jobson. File photo

MILLERTON — There’s good news for fans of the sea foam green building stationed smack in the middle of Millerton’s business district that was home to the iconic Terni’s Store for 100 years.

The three investors who purchased the Main Street property reportedly plan to keep it mostly intact. At least that’s according to Jonathan Bee of Hunter Bee, the popular antiques shop at 21 Main St., steps from where Terni’s Store had operated at 42 Main St., selling everything from fishing tackle to hunting gear to penny candy to newspapers to wool suits to cozy socks to ice cream sodas once made by a soda jerk right at the marble fountain.

Since 1919, Terni’s served as Millerton’s general store. For the tail end of that period, the late Phil Terni and his widow, Ellen, ran the business. Phil retired in 2020 and passed away on March 5, 2021, at the age of 77. Afterward, friends and family kept the store going for a short while, but then the family ultimately decided to shut down the store that had been run by three generations of Ternis.

It was a loss not just for the family that had emigrated from Italy to America, but for the entire Tri-state community, as so many had come to depend on and love going to Terni’s.

Everyone in Millerton knew of Terni’s; most had been customers at one time or another. Those who were lucky might have been treated to one of Phil’s stories of when Millerton was home to not just one, but three railroads.

Having an empty Terni’s storefront has been difficult for many Millerton residents these past couple of years, as well as for those who visit and shop along the popular Main Street. It was not only a vacant commercial space and lost tax dollars, the lack of activity at the historic site did no favors to the integrity of the structure or any of its mechanical features, either.

Those are just a few reasons why merchants were so pleased to welcome one of the new investors to the most recent Millerton Business Alliance (MBA) meeting on Wednesday, July 24. Richard Lamberston of Sharon, Conn., introduced himself to the MBA and shared some of his ideas for the building.

Lamberston is a designer with an impressive pedigree; he’s designed for Geoffrey Beene, Gucci and Bergdorf Goodman. He has a home in Sharon, Conn., and currently co-owns the antiques shop Privet House, in New Preston, Conn., with his business partner Suzanne Cassano.

The other two investors in 42 Main St. are Jason Jobson and Christophe Pourny. Like their partner, they both have long resumes boasting high-profile clients in the fashion and design industry.

Jobson is vice president and co-owner of the Christophe Pourny Studio as well as founder and editor of the fashion blog, www.aLIFEofSTYLE.com. He’s spent more than two decades in the luxury goods sector.

Pourny is a French master furniture restorer and author of “The Furniture Bible.” The how-to book offers tips and techniques for those restoring antique furniture with a foreword penned by Martha Stewart.

Days after the MBA meeting, Bee spoke with The Millerton News about his enthusiasm upon learning of the purchase, noting it should be a positive move for Main Street.

“Well, we’re always excited when a new business comes to town,” said Bee. “And I know that the building is sort of iconic, and the goal is to keep its integrity, so I think people are always happy about that.”

Oblong Books owner Dick Hermans said he, too, is excited about the future of the Terni’s building and what it could mean for the village.

“Oh, it’s great. Richard was at our merchants’ meeting and that in and of itself is a positive sign,” he said. “He has two partners, and it sounds like their priority is to get the building into shape. It’s wonderful to have that happening to that building; it was built in 1909.”

Hermans added Lamberston seems eager to get to work as soon as all of the required permits are in order.

“He’s excited to be involved with it,” he said. “And it’s going to be retail, so it will fit in with the village quite nicely. It won’t be the Terni’s of old, but he did mention that they will have some of the product lines that Phil carried at his store, so there will be some connection with that.”

While Jobson informed this newspaper via email the three investors are not quite ready to go public with their plans, as “they just acquired the building” and don’t have “news at this time,” he did end his  statement with encouraging words for our readers.

“Our first focus is on the building, which is a 100-plus-year-old gem and we’d like to make her shine,” wrote Jobson, adding, “We love Millerton!”