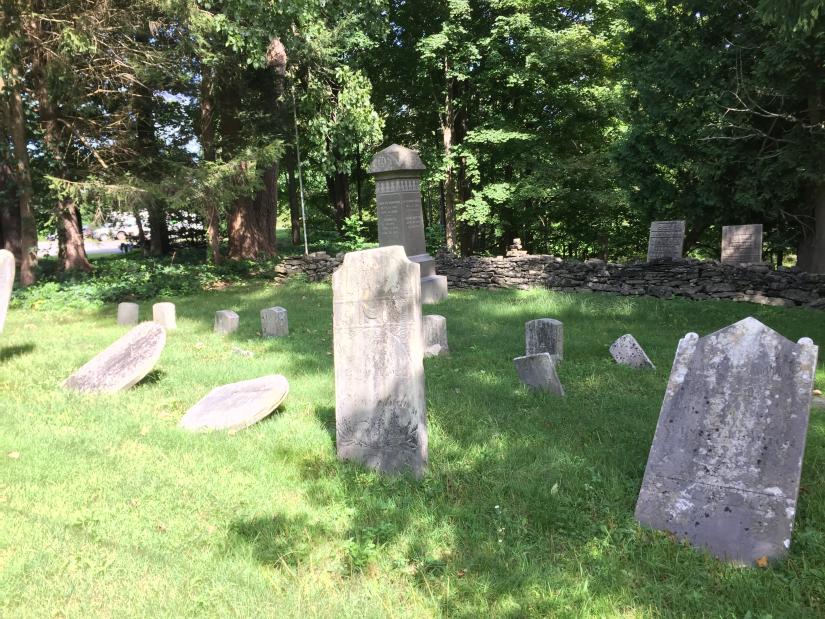 A headstone at the North East Center Burying Ground in Millerton was placed by “Friends” of former slave Thomas Stansbury (1824-1899) outside the stone wall of the cemetery proper.  Photo submitted

Slave grave follow up: The plot thickens in story of local slave’s burial

MILLERTON — Who knew rumors of inappropriate treatment of the remains of a former slave and others at the North East Center Burying Ground could be true?

Local history buff Bernie Silvernail knew — or at least he suspected. And so two years ago, in the early morning hours of Memorial Day, 2018, when a number of local leaders took part in the Millerton American Legion Post 178’s annual tradition of paying homage to local veterans at area cemeteries, Silvernail raised the issue with Dutchess County Legislator Gregg Pulver (R-19).

While at the small cemetery,  Silvernail showed Pulver a stone placed by “Friends” for Thomas Stansbury (1824-1899) that indicated Stansbury was born a slave.

Questions arose because a small stone fence seemed to isolate several graves from those in what seemed to be the cemetery proper. Those included that of Stansbury, whom North East Historical Society researcher Betsy Strauss said was noted in Census information as being born either in Maryland or Africa.

Silvernail urged Pulver to help investigate the situation, who did exactly that, aided by the diligent efforts of a small group of community experts including Strauss.

According to Pulver, volunteers at the Chase Land Surveyors of neighboring Pine Plains resolved the controversy after surveying the property and determining that some of the graves, including Stansbury’s, are actually located outside the confines of the cemetery proper in a small adjacent area owned by heirs of the original property.

Pulver — a Pine Plains resident and farmer — then began wearing his private citizen rather than his legislator’s hat — and started working with a pro bono lawyer to complete the sale of the landlocked property to the Cemetery Association so that the land would become part of the hallowed ground.

He learned that the owners of the tract had actually kept the section separate when other portions of the estate had been sold because they were aware of the graves and had wanted to preserve them. The heir is now pleased to make the sale, which is on hold due to complications caused by COVID-19 restrictions. Pulver said, however, the necessary funds amounting to less than $2,000 have been donated by an anonymous source, so the issue should soon be resolved.

Pulver admits he was actually surprised by the outcome of the survey.

“It turned into more of a mystery than I thought,” he acknowledged.

Although the initial question of the grave’s location has been otherwise resolved, Pulver and his group of volunteers will continue to try to uncover answers to other questions, such as who else may be buried in the area in question, why they were buried there and if a clergyman will be needed to provide any resolution.

Meanwhile, Pulver said, “We’re making sure that whatever we have to do,” will be done.

Once the property has been transferred and restrictions lifted, he plans to call on volunteers such as a sports team or a Scouting group to clean up the area and provide the respect that is due.

“Rest assured,” Pulver concluded, “I’ve had a lot of interest in people wanting to help. It’s a wrong made right.”