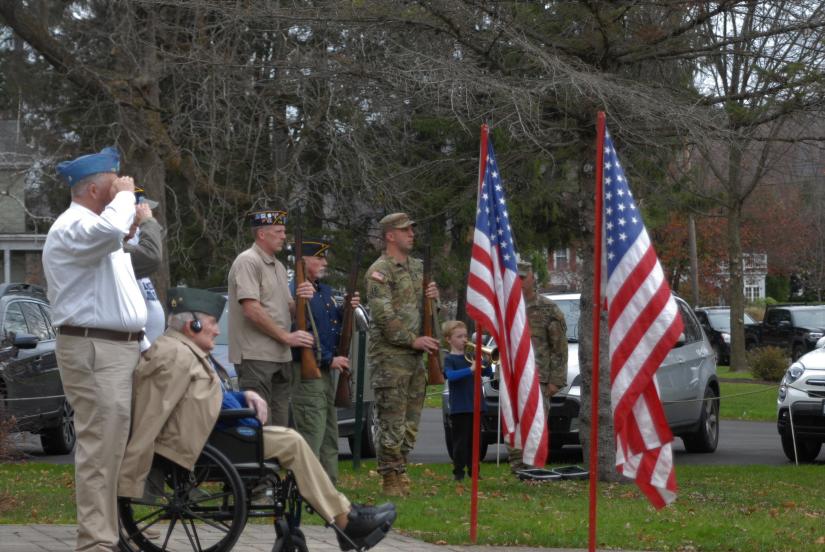 George Phillips, seated in a wheelchair, a World War ll veteran who served as a sergeant in the U.S. Army, observed Veterans Day on Friday, Nov. 11, at Veterans Park with other veterans and town residents. See more Veterans Day ceremonies here. Photo by Griffin Cooper

MILLERTON — The rain held out long enough for Millerton residents and members of the village’s American Legion Post 178 to come together and honor area veterans during the annual Veterans Day ceremony held at Millerton’s Veterans Park on Friday, Nov. 11.

As the clock struck 11 a.m. — the historic armistice hour that marked the end of World War I — veterans from foreign wars dating back to World War ll gathered to pay their respects to those who have given their lives or are serving today.

Veteran Sean Clay led the ceremony with words of gratitude for local veterans and their contributions to the community followed by the National Anthem and a moment of silence.

Afterward, local veterans performed a three-volley salute representing duty, honor, and country. The customary rendition of taps was performed and a benediction was given before the ceremony ended as residents gathered to thank the veterans on hand.

Clay commended the efforts of The Sons of the American Legion Post 178 as well as a small group of Millerton volunteers including some first responders, who placed flags in the park where they flew until the rains finally came later in the day.