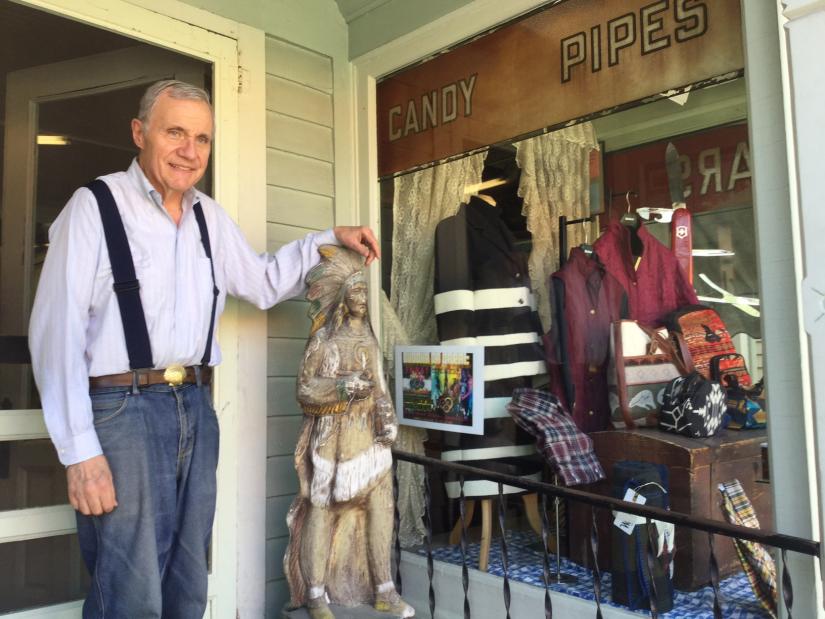 Standing alongside his store’s iconic wooden Indian, Phil Terni, the third generation owner of Terni’s in Millerton, celebrated the 100th anniversary of his family’s business in July of 2019. Terni passed away at the age of 77 at his Millerton home on Friday, March 5. File Photo

MILLERTON — Given the legacy he built on community, hard work, his respect for his family’s century-old Main Street business and his fellow merchants, the passing of Phil Terni marked not just the passing of much loved community member, but also a crucial part of Millerton’s history. Terni passed away at his home in Millerton on Friday, March 5, at the age of 77.

Born in Sharon, Conn., to the late Arthur and Henrietta Terni (the second-generation owners of the iconic Terni’s store in Millerton), the bulk of Terni’s life was tied to the local region. A 1963 graduate of Webutuck High School, he pursued a degree in public relations at Boston University in Boston, Mass., graduating in 1967. In 1971, Terni took over his family’s business, becoming the third generation to own and operate the store that sold everything from guns and hunting gear to newspapers and candy to high-end wool suits and slippers until his retirement in 2020.

Those who stopped by Terni’s often came for more than something to purchase, they came to talk. Chatting with Phil behind the old marble soda fountain that once served ice-cream floats could be an hours-long commitment — but one that always left those involved in the conversation both more informed and more entertained than when they started.

In the fall of 1972, Terni married Ellen Wessel at the former St. Patrick’s Church in Millerton. The couple had a son, Lyman, and a daughter, Clare. Over the years, Ellen could often be found at the store helping Phil, sometimes with a cat lazily roaming about, happy to be indoors on cold winter days.

Combing through their memories, longtime residents recalled the days when Terni’s was the spot to be. Drawing from childhood memories, Millerton resident Jim Campbell recounted how Terni’s was “the place to congregate” after church on Sunday mornings, recalling how he and his friends would get their penny candies and comic books while his father picked up the newspaper.

“To me, that was the heart and soul of the village of Millerton,” he said.

Remembering Terni, Campbell remarked how he was a good friend to many people — Campbell included — and how they connected over their interest in American history. Terni had many tales to share about how the railroad ran through Millerton years ago, and how the village changed from being a main stop to a village no longer on the line.

Also drawing from childhood memories, Donald Najdek fondly recalled buying penny candy and how Terni always emphasized good manners among his younger customers. Growing up in Millerton, Najdek shared how every kid in town would go to Terni’s for worms, fish hooks and sometimes cigars. While Terni always made sure they were “age appropriate,” he would also ask them, “Are you sure you want to buy this?” prompting them to consider their choices.

“He always said ‘hello,’ he always waved, he was always polite and worked every day of his life in the store,” Najdek said, recalling countless winters when he spotted Terni shoveling the sidewalks in front of his business with a timeworn metal shovel.

Reflecting on what Terni meant to the village, Najdek said he symbolized “community, respect, hard work and providing a fair product to the community that they needed and a very large amount of history that he knew of Millerton and the surrounding area.”

“The one thing I always appreciated about Phil is the pride he had in his store and his storefront,” she said. “I’d run to Irving Farm in the early morning and he’d be sweeping off the sidewalk. He’d make sure all of the space and the storefront were immaculate. It’s super sad to me because it’s one more piece of what the village used to be that I remember that’s shifting.”

Though much of the memories shared about Terni were interlaced with his family’s business, his involvement with the community stretched beyond Main Street, as he once served on the boards of the NorthEast-Millerton Library and the First National Bank of America. He was also a lifetime member of the Millerton Gun Club.

“For any of us who have lived and worked in this community, we have never known Millerton without Phil until he had to retire from his business last year,” Oblong Books & Music owner Dick Hermans said, whose store is just doors away from Terni’s. “Phil was a pure Main Street merchant, serving the community by showing up every day and supplying people with goods that mattered to them. He was friendly to all and never put himself above anyone who came into his store.

“Millerton may never be quite the same now that Phil has passed,” Hermans continued, “but I hope the business community always remembers to emulate the honest and humble way Mr. Terni went about his business.”