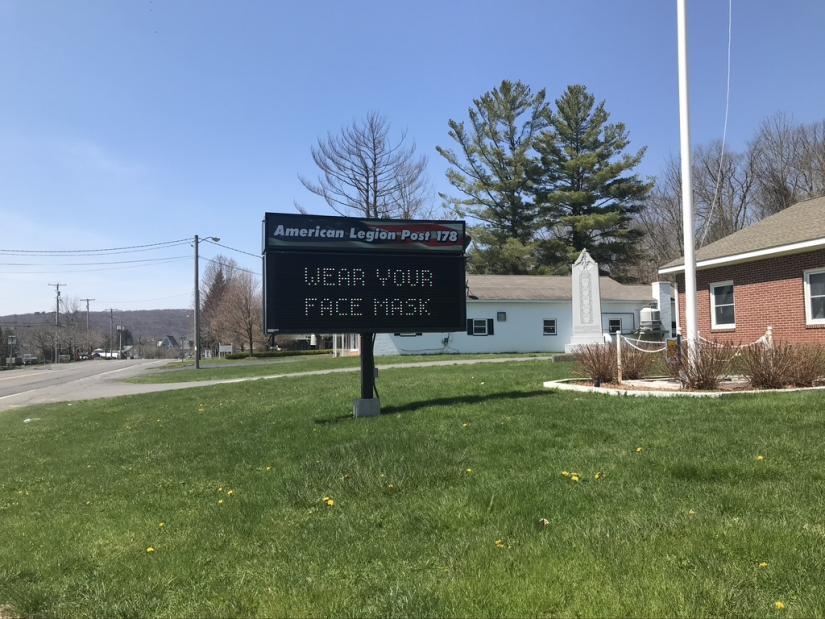 The Millerton American Legion Post 178 has lent the town of North East the use of its yet-to-be-approved sign during the coronavirus pandemic to post emergency information and health alerts as a community service. Photo by Sean Klay

May 20, 2020
By
Whitney Joseph
editor@millertonnews.com

NORTH EAST — The town of North East still may not have given approval for the Millerton American Legion Post 178’s electronic animated display sign that was illegally installed last year without a permit, as LED signs are not allowed in the Boulevard Zoning District where Post 178 is located, but that hasn’t stopped the town from reaping the benefits of the sign itself in recent months. That’s because, as an act of community goodwill, the Legion has been electrifying the sign and displaying messages during the coronavirus pandemic — informing passersby of essential information regarding the New York State on PAUSE Executive Order from Governor Andrew Cuomo, from the Department of Health, from Dutchess County Executive Marc Molinaro, from the Millerton Food Pantry, etc. According to Legion Historian Sean Klay, the service organization decided to help the town immediately after COVID-19 hit New York in any way it could.

“Basically, since mid-March, we made the offer to the town,” he said. “We said, ‘Listen, we have some rather exceptional circumstances and if the town would like to put out appropriate messaging up there, we’d be happy to facilitate it,’ and the town took us up on our offer. That was kind of one of our motivations behind the sign anyway. It goes back to our whole discussion with the town anyway, one of the purposes of the sign, one of its intended purposes.”

Back on Oct. 10, 2019, Klay argued on behalf of the Legion that the sign was there for emergency purposes, which trumped any concerns about spot zoning. The Town Board did acknowledge the benefits of the sign, which could advertise community events put on by the Legion like blood drives, warming and cooling shelters and fundraisers. However, the board stressed it had to abide the town’s zoning, and that the sign was illegal.

The only other alternative would be for the town to rezone the entire Boulevard District. That would bar it from restricting similar LED or animated signs in the Boulevard District, including flashy “for sale” signs, which the board feared could be just as large and just as bright.

Concerns arose at the October 2019 meeting and subsequent meetings that the Route 44 corridor could wind up looking like the Las Vegas strip. North East town Supervisor Chris Kennan said he wants to reconstitute the Zoning Review Committee (ZRC) to look over the LED sign issue — and all of the town’s zoning regulations — before ruling on the matter. It’s a large undertaking that could take upwards of a year, he said.

“[The ZRC] will be formed at some point when we can operate more normally,” said Kennan again last week, “and which will hopefully get to go forward and get operational later this year. It would be an advisory committee; they’ll take a look at all of the zoning for the whole town, so it’s a large task, not for the faint of heart. Those recommendations will then go back to the Town Board.”

In the meantime, Kennan said  the town is perfectly within its rights to make use of the Legion’s sign, despite it being technically illegal.

“Under the state of emergency, the town supervisor has the ability to override local regulations, if it is in the interest of public safety,” he said, “and the Legion offered to use their sign to convey messages relating to the coronavirus pandemic, which was very helpful, and everybody that I’ve talked to has thought that it was an appropriate use of the Legion’s sign.”

Klay said he hopes the roughly 10-second messages displayed on the sign help make the Legion’s case when the ZRC considers the sign’s legality in the future. In the meantime, he said he’s encouraged by the people he’s spoken with about the function the sign has played during the pandemic.

“I’ve only gotten positive feedback from it,” he said. “We’re only running things related to the current crisis. This is us being good neighbors; we’re looking only to help.”