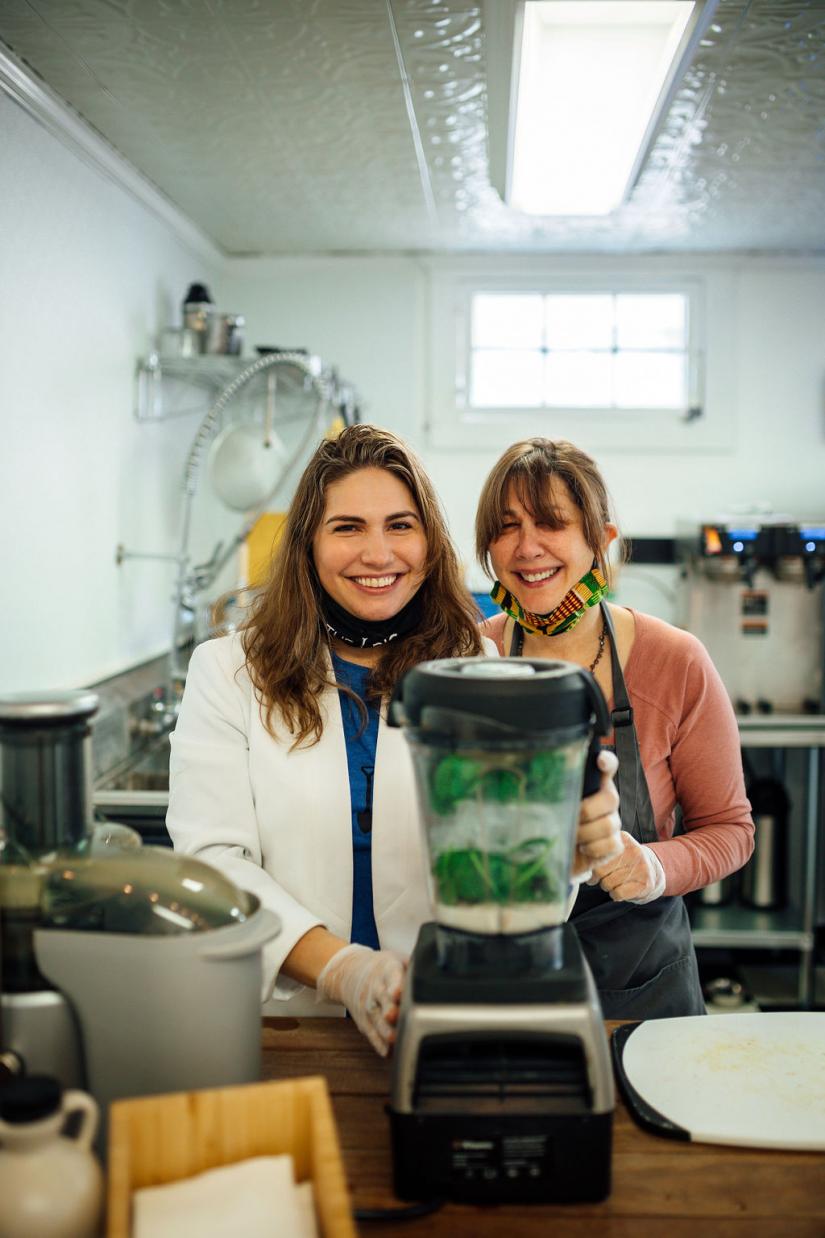 From left, The Dig co-owner Katja Schultz and her mother, Natalie Pere, prepared to make a fresh smoothie together at its smoothie bar. Photo by Aly Morrissey Photography

MILLERTON — Nearly a year and a half after opening The Dig in Millerton, Katja Schultz has decided to close the café and store for good on Friday, Dec. 31. The village resident poured her heart and energy into creating an accessible, comfortable community space at 3 Main St. Yet when 2022 arrives, the village will find that cheerful space of everyday enjoyment vacant, another casualty of the COVID pandemic and the economy that has fallen ill alongside it.

Schultz and her husband James teamed up with their friend, Raquel Madar, to open The Dig in August 2020. Since then, it has become a place where people can purchase groceries sourced from local vendors and do so much more.

They can engage in community events, purchase artwork by local artists, treat themselves to fresh smoothies and crepes and pass time in its relaxing outdoor patio space.

Working alongside the owners are Webutuck High School students Kaitlyn Cope and Avery Wickwire, multiple volunteers and members of Schultz’s family, including her mother Natalie Pere.

Yet even with The Dig’s initial success, Schultz understood the all-consuming nature of running a small business, especially in Millerton. Over time, she said it became obvious that she and her mom couldn’t sustain The Dig wasn’t, between the time commitment and the challenge of hiring people in today’s climate.

Deciding it was a lot for her and her family, Schultz said. “We had met our goals and I felt like this was the right time to close. It felt like we had a good season one and we didn’t want to have a bad season two.”

Despite their loss, Schultz said she and her mother will be celebrating till the end of the month — in other words, they plan to go out with a bang.

The Dig will be open Fridays through Mondays from 9 a.m. to 4 p.m., with a blowout sale before Christmas and plenty of fun before closing on the 31st.

Considering her future beyond The Dig, Schultz said her first goal is to ski as much as possible with her children and enjoy her weekends with them. Though she’ll no longer be an active merchant in the village business community, she wants to shift her focus and time to learn how to help other local businesses thrive.

Shultz has also discussed how to offer incentives in town “that are different but are mostly needed” to draw people in. She also wants to highlight the community’s existing resources to attract more visitors and figure out how to translate the digital world of connections into actual experiences.

Going forward, Schultz, who remains open to learning new information, hopes to bridge people together with new ideas — almost as a community liaison. Recognizing the devotion local business owners pour into their enterprises and the challenge of making a profit these days, she wants to make a difference with what she learned from running The Dig and help other merchants prosper.

Before The Dig, 3 Main St. was previously occupied by a small grocer, the Millerton Mercantile. Caponera explained she originally bought the building with the intention of having her nephew and nieces run it as a small farm grocery store for residents who couldn’t drive to a supermarket.

Opening in the summer of 2019, Caponera’s nephew, Stephen Murphy, managed the Millerton Mercantile for just more a year before it closed.

Based on her experience, Caponera said running a business in Millerton is a dream, given all the support fellow merchants give each other. However, there are challenges with limited parking in the village and the enormous time commitment.

“For the people who actually run it, you really have to have it be your only job because it really is a full-time job,” Caponera said. “What happened with us, we thought it would sort of seamlessly run itself, but there’s so much involved in running anything to do with food. It was really a labor-intensive operation.”

From what she’s heard from other vendors who occupied 3 Main St., Thorunn Kristjansdottir, who heads up the Millerton Business Alliance (MBA), recognizes the parking challenge, especially at the top of Main Street,which has “nothing but office spaces around it.” With The Dig leaving that space, Kristjansdottir said there’s no major draw to that part of Main Street. Instead, the business community appears to taper off around the businesses located on Railroad Plaza, where the Harney Tea Room is with Golden Wok and Country Gardeners Florist.

There is the popular Moonwake Yoga, though, on the second floor at 5 Main St., run by owner Kate Shanley (formerly called Buddhi Tribe).

“Whenever there’s a new business that opens or someone moves to town, we’re always excited… to have a new offering to the mix of offerings available in Millerton,” Kristjansdottir said. “The business owner has to make the decision. No matter what that decision is [when a business closes], it’s always a loss for the community.”

Along with filling the vacant space on Main Street, Kristjansdottir said she hopes “something opens up that has a draw for itself and be another flavor to add to the mixture of Millerton.”

“I always get a little concerned when businesses close west on Main Street,” said Mayor Jenn Najdek, “but we’ve been pretty fortunate. Usually when something closes, it’s not too long before something else takes its place.”

Asked what she’d like to see as the space’s next prospective business, Caponera said it would be great to have a store similar to The Dig or the Millerton Mercantile — something that won’t create a lot of noise and perhaps offer a gathering spot and local groceries.

Caponera advised anyone interested in renting 3 Main St. to get in touch with agent Brad Rebillard at Dutchess County Realty in Millerton.