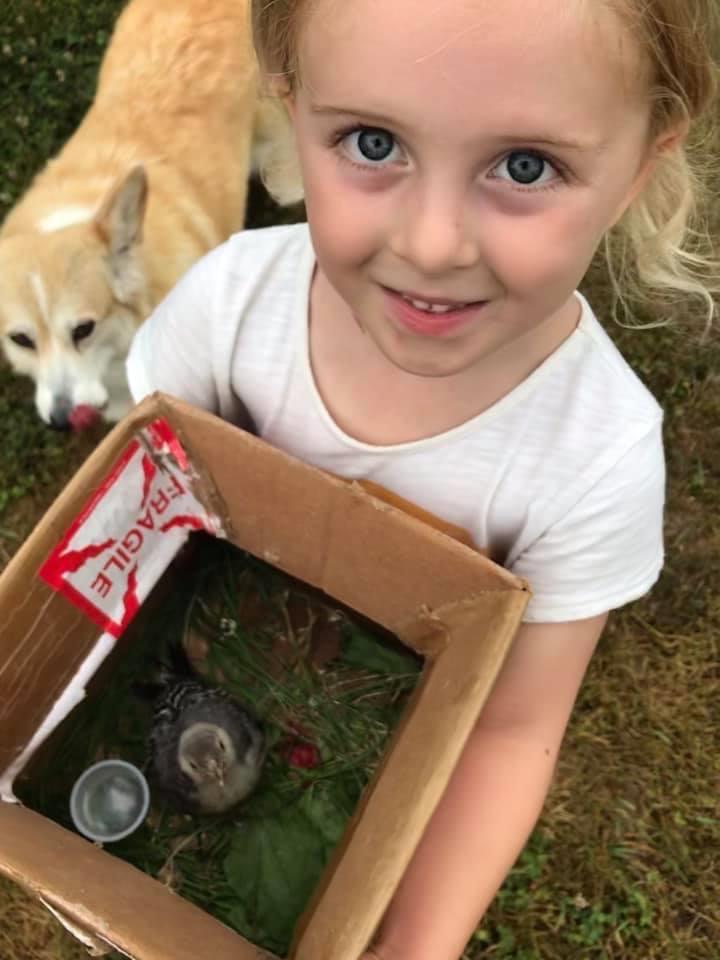 Lillian Perusse, 4, made sure the woodpecker she and her brother, Tillman (not pictured), named “Rainbow” was comfortable in his cardboard box before being taken to Sharon Audubon. Photo submitted

MILLERTON — Assisted by their two young children, the Perusse family of Millerton opened their home to a fallen fledgling for an overnight recently before bringing the bird to the Sharon Audubon center in nearby Sharon, Conn.

Remembering the night of Wednesday, May 27, fondly, Jaclyn Perusse said she and her family had come home around 8 p.m. and let their two Corgis out. While the children — Lillian, 4, and Tillman, 2 — were getting ready to go out and play before they had to put their pajamas on for the night, she said the dogs were playing by the front door. When the children went out to see what the fuss was, they found a baby bird on the bottom step.

Despite the tumble it took from its nest, Jaclyn said the bird was in good spirits and was chirping when the children found it. Even the Sharon Audubon said the bird looked good, she said, when they brought the animal to the wildlife refuge the next day.

Overjoyed by their find, the siblings called for their mom and then for their dad, Joe, so that he could get a ladder and return the bird to its nest. The family had been watching the mother bird bring food to its babies. But that evening they couldn’t reach the nest. They kept the bird overnight inside made sure their feathered guest would be comfortable.

Jaclyn got a shoe box with a towel in it, and the children placed grass and leaves inside the box. Soaking pieces of dog kibble in water, Joe used a pair of tweezers to feed the fledgling the softened kibble. The bird slept in the Perusse family’s garage that evening and Jaclyn was there to check on the it the next morning before her children woke up.

Around 3 p.m. Thursday, it was time for the children to say goodbye to their feathered friend, who Lillian named “Flower.” While Tillman was sad to say goodbye, Jaclyn said Lillian was devastated on the ride to Sharon; the bird rode in the backseat next to Lillian who kept an eye on it. Talking to the bird throughout the entire ride, Jaclyn said her daughter kept saying, “Remember the way we’re going so you can find your way back home to me when you’re released.”

Once at the Sharon Audubon, the Perusse family waited for a virtual program to end and someone to take care of Flower.

Since Flower first fell into their lives, Jaclyn received a text from the Audubon about Flower; the bird had been identified as a European starling, non-native to the area. Flower was transferred to a private rehabilitation.

When she told her children the news about Flower, Jaclyn said Lillian was a little sad since the Audubon originally told them they could take the bird back to be released once she was ready. Nevertheless, she said Lillian was happy knowing Flower was getting the best care possible.

Roughly a month later, on Sunday, June 28, the family found another bird, a woodpecker, at Jaclyn’s parent’s Millerton home. Thinking the woodpecker may have had an injured wing, they took it home  overnight; the children named it “Rainbow.” The next day, they brought Rainbow to the Sharon Audubon. Because of the Audubon’s contact-less drop off procedures due to COVID-19 and limited information due to the pandemic, Jaclyn is uncertain about Rainbow’s status, but said she appreciates all of the sanctuary’s help.