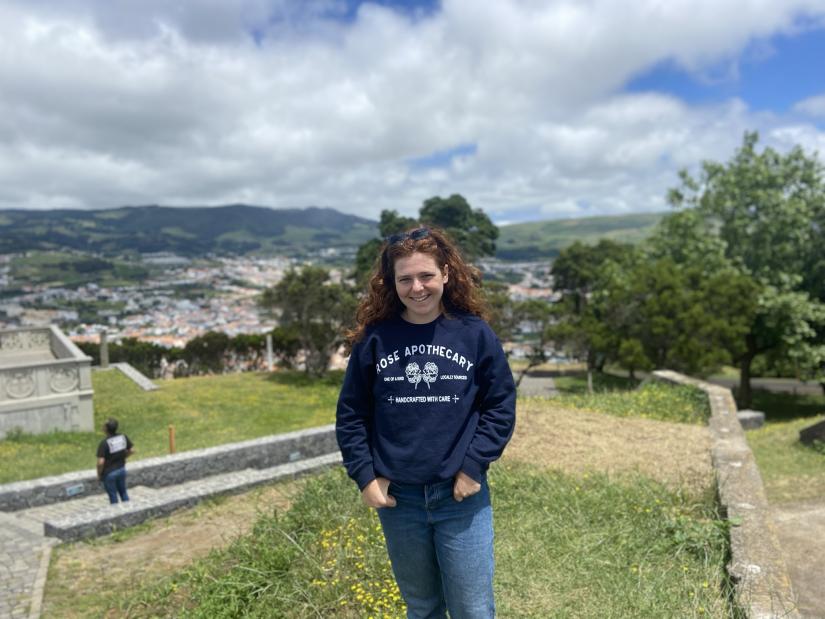 Amenia resident Emma Benardete has just joined The Millerton News as its newest freelancer, and will cover news around the Harlem Valley remotely while attending Oberlin College in Ohio. Photo submitted

MILLERTON — An Amenia resident and the newest member of The Millerton News team, freelancer Emma Benardete, packs a lot of punch for a 19 year old.

A rising sophomore at Oberlin College in Oberlin, Ohio, she’s already the editor-in-chief of The Oberlin Review. The promotion from opinions editor to editor-in-chief was ground-breaking for someone so young.

“I floated the idea [of running for the position] by my current editors-in-chief, and they were very supportive,” recounted Benardete on Saturday, Aug. 27, while in Amenia for a brief break. “We discussed the pros and cons, talked it through and then I was like, ‘Why not?’”

Why not indeed. After a “contentious” election, she wound up tying for the position with her opponent. A run-off election followed and Benardete came out the victor. Now, as she begins her second year with The Review — her first foray into journalism — Benardete will help manage what is not only the college’s newspaper but the newspaper of record for the town of Oberlin. The political science and Latin major will do so along with a second editor-in-chief and the paper’s managing editor, overseeing a paid staff of students.

“The town paper closed several years back,” she explained, adding being the town’s official newspaper adds to the responsibility of producing a professional product.

A glance at her portfolio, filled with about a dozen-and-a-half samples of mostly editorials sprinkled with a couple of news stories, proves Benardete can easily stand shoulder-to-shoulder with any seasoned reporter.

Her first article for The Millerton News was published on Aug. 25, regarding grants from the New York State Department of Environmental Conservation aimed to help Columbia and Putnam Counties create plans for the Hudson River, local estuaries and their general environs (at www.tricornernews.com).

During school, Benardete will continue to investigate, write and file her assignments from Ohio. As so many workplaces transitioned to functioning remotely during the COVID pandemic, she said doing so shouldn’t pose a problem.

“In terms of covering things remotely, I don’t think it will be too much of a challenge with all the brilliant technology — some phone calls, emails,” she said. “You can send someone an email to answer some questions… and later Zoom. Some stories, obviously, would be great to cover but you [might] only be able to cover [them in person], like a performance at the Sharon Playhouse.”

After attending Indian Mountain School in Salisbury, Conn., and then the Concord Academy in Concord, Mass., Benardete said she’s “excited to have the opportunity to reconnect with this community” as a reporter while attending Oberlin.

She said she also appreciates the chance to offer a younger person’s viewpoint for readers to consider.

“I’m really looking forward to being able to cover things in the area and I’m excited about being able to lend the perspective of someone who’s college-age and who has experienced this community for the last 20 years,” said Benardete. “It’s different than someone who grew up here, maybe, but did so 10 or 20 years before I did.”

She noted why she’s so drawn to journalism.

“This is the first time I found something I feel I really excel at in a way I haven’t experienced before,” said Benardete. “I feel I’ve been reasonably good at things but I didn’t have the level of skill and ability that I have at the newspaper. It provides me with a feeling of accomplishment and success, doing this thing I excel at more than I do at anything else.”

Though initially planning to study law, and now possibly politics, Benardete said while she’s “not super-certain what I want to do after I graduate, journalism is definitely a possibility.”

She described what appeals to her about the field.

“I like discourse, I like to have conversations, I like to debate, and this is sort of my way of debating in more civilized, control environment,” said Benardete. “I’m really excited to be working for The Millerton News… and I’m really looking forward also to not only working with The News but building relationships through this with a lot of local community members.”

Readers are encouraged to contact Benardete with story tips by emailing emmab@millertonnews.com.