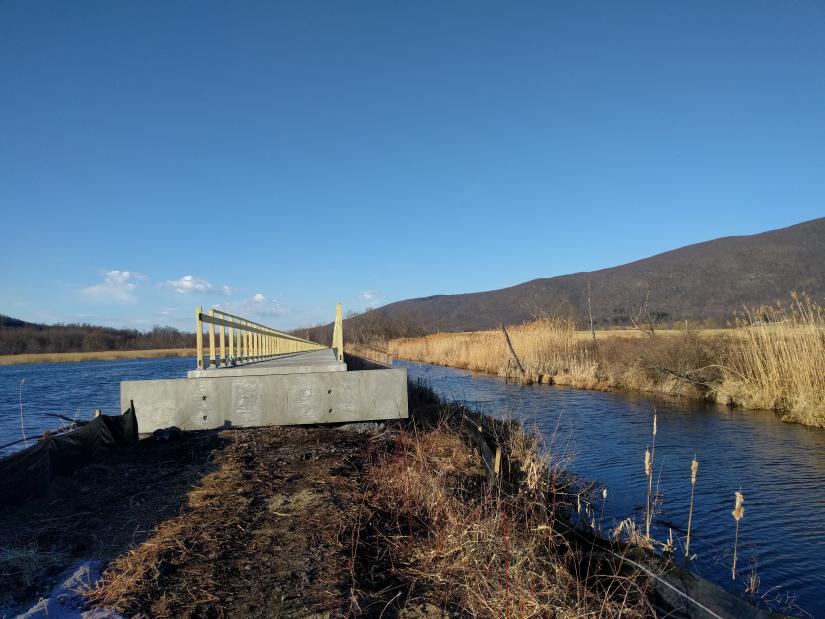 MILLERTON — The Harlem Valley Rail Trail arrived in Millerton from Amenia in the fall of 2000, about 20 years after the last freight train pulled away. Since then the trail has expanded by 5.5 miles at the Taconic State Park in Copake Falls and 1.5 miles coming south from Hillsdale.

Currently a project is underway to construct nearly 9 miles of trail connecting Millerton with Copake Falls. In mid-July, trail work reached Main Street in Millerton and the route through Railroad Plaza has become clear. Along Route 22, just north of Millerton, the work is quite evident. It is not possible to see the work being done through the incredible wetlands the trail will traverse where the rail bed bends into the middle of the valley between Route 22 and the Taconic/Berkshire Mountains. Here several short concrete bridges are being put in place to allow water to flow beneath to keep the wetlands habitat healthy on both sides of the trail. In about 1850, the New York and Harlem Railroad moved tons of earth to create the raised rail bed that the trail is now being built upon.

Construction has been ongoing despite the COVID-19 pandemic. It is outdoor work, obviously, and the contractor, A. Colarusso & Son of Hudson, working on behalf of Dutchess County, has been careful about the health of their workers. The new part of the trail is expected to be completed in September and it will become a Dutchess County Park along with the rest of the trail the county has built south of Millerton. The new section of trail is not open to the public during construction.

The Harlem Valley Rail Trail Association (HVRTA) was formed in the mid-1980s, with a mission to work to complete a trail between the Metro-North Railroad Station in Wassaic and Chatham in central Columbia County. HVRTA has recently completed design work on a link between Copake Falls and Hillsdale that will include a new pedestrian bridge over Route 22. HVRTA assisted New York State Parks in receiving a grant to fund construction of this trail link and the organization has begun a campaign to raise the local matching funds to activate the $1.9 million grant.

HVRTA is also working on converting half of a double wide railroad bridge in the village of Millerton to a “Bridge to Nature,” which will help folks explore the natural wonders along the trail and appreciate the forces and processes that formed today’s landscape. Find more about all this at www.hvrt.org.

One other section of the trail deserves notice. A short link between the Metro-North Station and the hamlet of Wassaic is nearly complete. This piece, being built by the town of Amenia, will be a fine addition and a benefit to businesses in the small hamlet of Wassaic.

During the virus pandemic, completed sections of the Rail Trail are good places for residents and visitors alike to get outside and stretch their legs. The rock cuts and shady areas offer a comfortable break on hot days. Exercise enthusiasts can take advantage of nature’s wonders to lift their spirits, breath the wild wind and escape for a while from the concerns that challenge everyone these days.

Dick Hermans is the chairman of the HVRTA and co-owner of Oblong Books & Music in Millerton and Rhinebeck.