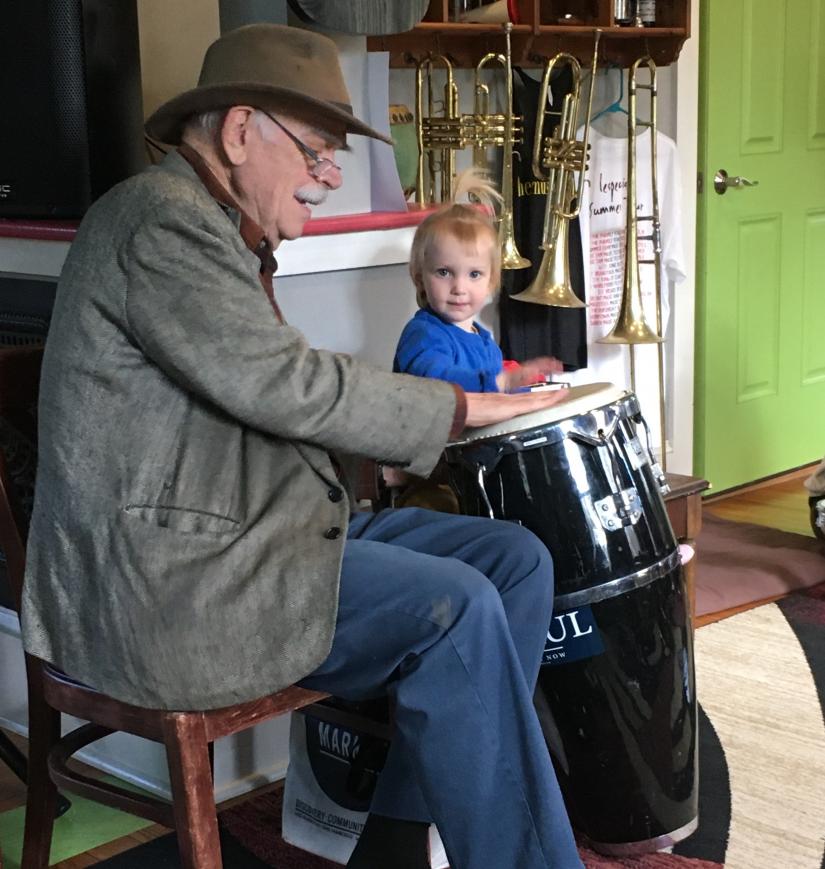 Charlie Keil, an 82-year-old musical treasure who teaches in Millerton, delighted in introducing a budding artist to “hand drumming” during a free Sunday session at The Music Cellar. Photo submitted

MILLERTON — The heartbeat of Millerton can be heard loud and clear on Sunday afternoons in front of The Music Center at 14 Main St. That’s where, from 3 to 5 p.m., free sessions feature first drums and then brass instruments.

Providing the basics to anyone who is interested, expert drummer 82-year-old Charlie Keil is happy to teach both young and old about the ways in which music can be produced and used to enhance lives.

Keil said he feels the project is an important one because even before babies are born, they are able to hear and process different  sounds and rhythms such their mother’s heartbeat and breathing. He said that’s how infants enter life — ready to process and benefit from recognizing and connecting the sounds that they hear in the world around them.

He believes that as children arrive, they are ready to build on that ability and that if they are allowed to do so, their lives will be enriched even as they pay attention to the rhythms that “are everywhere you go — lawn mowers — the dentist office — the elevator.”

Thinking about the opposite situation, he also believes that without being aware, problems can evolve if humans are out of rhythm with their environment.

As a result, Keil is anxious to share his knowledge of drums and their resulting rhythms with anyone who is interested.

He spends every Sunday afternoon either outside on the steps of The Music Cellar or inside, depending on the weather. Either way, he encourages others to be a part of the sessions, even calling out to visitors enjoying the nearby Harlem Valley Rail Trail to join in.

Keil generally teaches hand drumming rather than using sticks, showing students they may produce different effects depending on where on the head the drums are struck. He uses “dumbeks,” which are Middle Eastern drums derived from the old Ottoman empire, often called goblet drums. The drums, which are fairly affordable, are loaned for the lessons by The Music Center.

It is Keil’s hope that as children begin to pick up the idea and the skill, their parents will join in and eventually begin to fill their homes with the rhythms. He firmly believes both young and old can produce and benefit from the process, and the experience.

Keil, a self described “writer, cultural anthropologist and activist” is the author of “Urban Blues.” Details may be found on his website, www.charleskeil.org, which also contains a number of political postings. The site states the book “is usually still in the top 10 of the Amazon ‘Rhythm and Blues’ list of 80 to 90 books.” It’s still useful in a variety of college courses, it notes, adding it’s “sold about 70,000 copies since 1966.”

In addition to articles and his blog, the site also has links to a number of his other books, including: his current extensive work “Born to Groove”; “Music Grooves: Essays and Dialogues”; “Bright Balkan Morning”; and “Polka Happiness,” among others.

In addition to the free Sunday sessions, The Music Cellar provides a variety of instrumental lessons with costs determined by a sliding scale, a recording studio and a rehearsal space. Call Keil at 860-671-9745 or go to www.music-cellar.com for details.