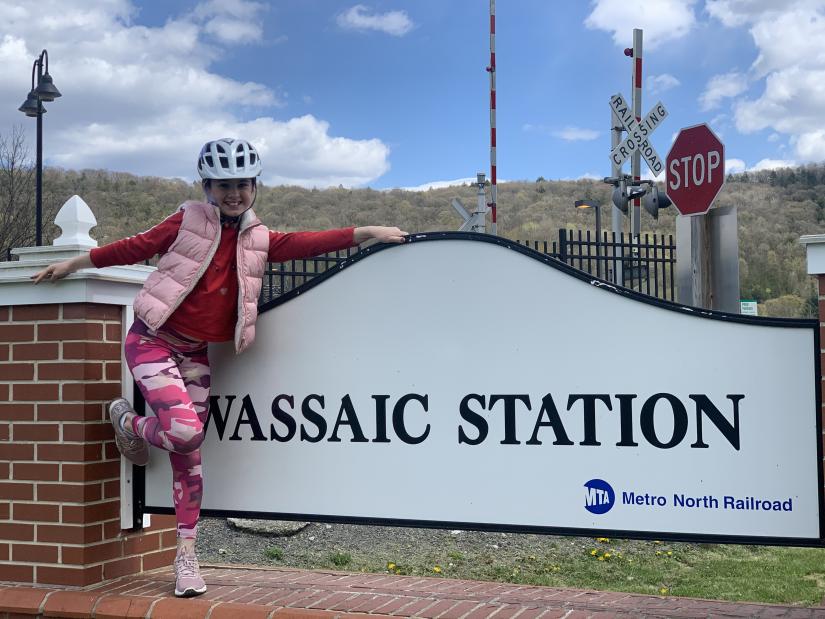 MILLERTON — Inspired by the North East Community Center’s (NECC) commitment to supporting the local community and encouraged by her teacher to fundraise for a local nonprofit, Addie Brown, 9, decided to ride her beloved bicycle along the Harlem Valley Rail Trail and organize her own bike-a-thon to raise money for NECC.

A resident of Lakeville, Conn., Addie just finished the year as a fourth-grader at Indian Mountain School. As told by her mother, NECC Board of Directors member Shannon Tyree Brown, the idea for the fundraiser was planted by Addie’s fourth-grade teacher, Kelly Tieger. On top of their efforts to raise money for a class gift, Brown said Tieger told her students that they could also raise money for a local nonprofit using any form of fundraiser they wished.

While her classmates chose nonprofits such as the Centers for Disease Control and Prevention (CDC) Foundation and other national charities, Addie decided to focas locally. After overhearing to her mother’s last board meeting call, Addie realized NECC needs help and decided to use her fundraiser to raise money to support the organization.

Starting Thursday, May 7, Addie began her ride for a cause down the familiar trail, covering a stretch of 21 miles. Her fundraiser continued on Sunday, May 10, during which time she rode another 21 miles on the trail.

“She has a lot of stamina,” Tyree Brown marveled. “She was definitely tired at a point, but she was really motivated by the fact that this money would wind up at the NECC.”

Though Addie started her fundraiser by reaching out to her family members in order to keep it small, a post on Tyree Brown’s Instagram account expanded the number of donors. While she thought she might raise between $100 and $150 overall, Addie’s bike-a-thon raised a total of $425 in donations, most of which were donated by platinum sponsors. After collecting donations through the mobile payment service Venmo, Tyree Brown sent a check to NECC.

Speaking as both Addie’s mother and a member of the NECC Board of Directors, Tyree Brown couldn’t have been more touched in seeing a person Addie’s age come forward to support the local community.

“I think it’s inspiring,” she said. “I hope she inspires other children to stand up and rise up to this challenge of helping our communities. I think we’re all in a position to help — you can help in small ways by dropping off food or big ways like cycling 42 miles.

“I’m incredibly proud,” she continued, “and I think this is how we want to raise our children. Indian Mountain School does a beautiful job of this — they really encourage life through service and they place great emphasis on community, and I think that spills over to their efforts outside of school.”

“I definitely did not think I would raise more than $200,” Addie said, excited about her accomplishment.

Reflecting on the experience of creating an original fundraiser to help NECC, she said, “I mean, it was tiring, but it was so worth it — knowing I get to help people makes it worth it.”