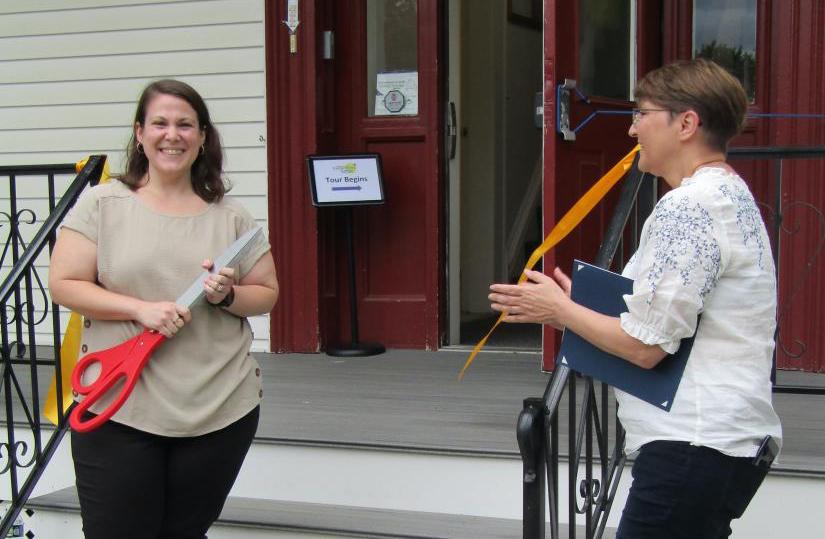 MILLERTON — The North East Community Center (NECC) fulfilled its long-awaited dream and opened its Early Learning Program at the former Astor Head Start at 11 Park St. in Millerton on Thursday, June 23, at 3:30 p.m. Supporters of the nonprofit community center attended the ribbon cutting, some of them hoping to enroll their children in the pre-school program once it opens.

Years before joining NECC as executive director, Christine Sergent said her predecessor, Jenny Hansell, came up with the idea for an early childcare program with the NECC Board. With the onset of the COVID-19 pandemic, Sergent said the need for childcare reached a critical point in the area. Then came the closure of the Astor Head Start program in the last year or so, adding further pressure.

The new program will provide childcare for those between 18 months and 4 years old.

NECC had focus and community groups convene throughout the 2021 to discuss plans for the preschool and day care. By December, Sergent and her team created a comprehensive implementation plan to present to the NECC Board, which unanimously voted to go forward with the program.

The ribbon-cutting drew a small, but cheerful crowd of community members, NECC staff, local and state representatives and longtime NECC supporters. Passing underneath the golden ribbon tied tautly across the building’s entrance, Sergent said, “We are incredibly proud to be able to come to this moment while this site is opening to us in Millerton.”

She also reminded those present that their dream came on the heels of Millerton losing the Astor program. She thanked Astor Director Athena Galarza for her years of work.

Given that Millerton has a reputation as a “desert” when it comes to five critical issues — affordable housing, public transportation, mental health services, food and childcare — Sergent said, “Many of the people here are all partners as we all work together on those five issues to try to bring change for Millerton and the North East region.”

“Citizens want the community to be as vigorous and healthy as possible and we will do what it takes to make it possible,” she said.

NECC Board member and Treasurer Diane Zimmerman remarked she’s never seen so much energy, hard work or frustration go into a project. She added it reached a point where the program evolved from Hansell’s dream to the NECC’s dream.

Remembering her mother Mariley Najdek’s advocacy for local children, and as the person who began and served as the longtime director for the Astor Head Start program in Millerton, Mayor Jenn Najdek also spoke at the ribbon cutting.

“I know she’s looking down smiling, knowing the children are receiving the support they need,” she said with pride.

Acknowledging the hardship of closing the Astor site, Galarza said the partnership between Astor and NECC was the best solution as it assured local families they would be taken care of. She thanked NECC for stepping up to the plate.

In addition to announcing 32 open slots with the preschool, Sergent announced the entire building at 11 Park St. will be rented out.

Thirty-five NECC staff members and counting have been relocated from the South Center Street building to Park Street. Meanwhile, Astor will rent a portion of the first floor from NECC for its services and an outpatient mental health clinic.

Applications are being accepted for NECC’s Early Learning Program throughout July. For more information, contact Cashdollar at 518-789-4259, ext. 110 or at raina@neccmillerton.org.