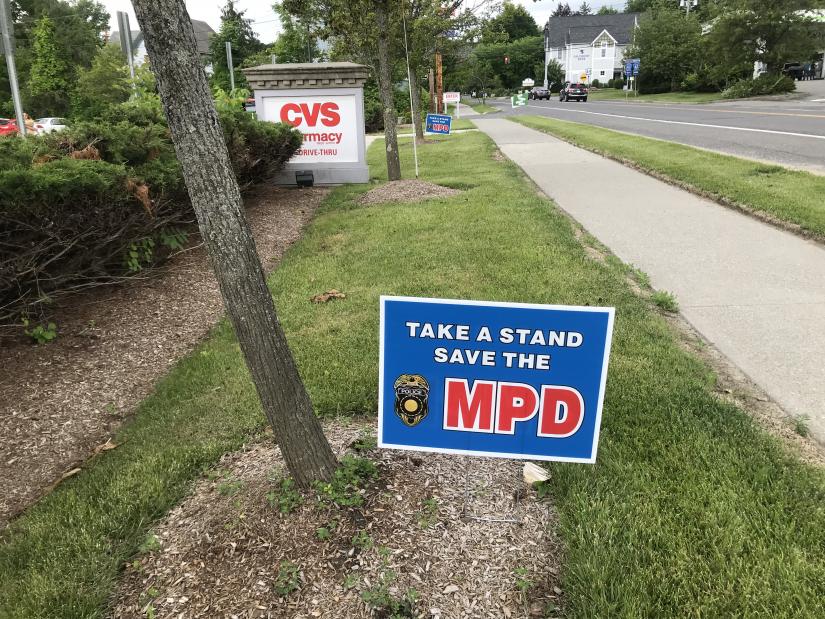 Facebook group works to Save the Millerton Police Dept.

MILLERTON — A different kind of harvest has sprouted up in the village of Millerton and town of North East since Memorial Day than one typically sees in the northeastern Dutchess County community.

It’s a crop of more than 200 lawn signs calling for local support of the part-time Millerton Police Department (MPD), which is facing possible dissolution. The Village Board recently proposed Local Law B; if it’s adopted and ultimately passed by a mandatory referendum and future special election there will no longer be a local police force — but there will still be police coverage.

That’s because the village is considering hiring the Dutchess County Sheriff’s Office (DCSO) to protect and patrol Millerton — but only the village — not the town of North East. Police services for those citizens would have to be sorted out by the Town Board.

If hired, the DCSO would set up a substation where the current MPD is located at the Village Offices on North Elm Avenue (Route 22).

A single deputy would serve during each shift, with three shifts rotating in the village 24/7, covering areas the board deems necessary. Residents and business owners have been invited to submit their thoughts on where patrols are most needed.

The village is only 0.6 square miles, whereas the town is 43.7 square miles. Mayor Jenn Najdek and her trustees have argued the MPD spends much of its time patrolling the town when the village funds the majority of the MPD’s budget.

The village’s 2022 police contract expired on May 31. Najdek said “there have been times in past that we’ve continued to operate without a contract, so this isn’t saying we’re not going to work on this. The tricky thing is working with town because we’re on different fiscal cycles.”

Najdek said in the “near future” the town and village  “will get together with our attorneys to work out a contract of sorts.”

If the village abolishes the MPD, the DCSO would only patrol the 0.6-square-mile section that comprises the village; the town would need its own contract with the sheriff’s office or another agency for police services.

The Village Board introduced Local Law B on May 24 with its attorney, Victoria Polidoro, present. She explained then the new law is very similar to the original, designed to dissolve the MPD.

The mayor explained on Friday, June 17, why the board opted to have a new law penned in lieu of pushing Local Law A through, which was never adopted.

The mayor further explained that after the board schedules the requisite public hearing, and if it adopts Local Law B, it would have to post its plans to adopt the law in The Millerton News (its official newspaper). A special election would then have to be held within 10 and 60 days from when the legal notice is published.

Residents and business owners have been weighing in on the idea of disbanding the MPD ever since the idea of contracting with the DCSO  was first presented by the village.

A village workshop was held on March 29; Acting Sheriff Kirk Imperati was on hand to speak about the services offered by the DCSO. The public was encouraged to attend and ask questions.

The village spent weeks reviewing all of those public comments and at meetings held since.

“After the public hearing and further discussion, enough people had come to the public hearing and the majority of the board talked about it and thought, let’s have our attorneys draft Local Law B,” said Najdek, who added she has no idea when the board will move forward with passing a resolution for the new local law. “Nope, that’s a hard ‘no.’ One of the things happening now, the board has a lot going on. We’re gearing up for our reorg meeting, we’re in the middle of grant season -— we have tons of grants we’re applying for — there are many things happening. So one of the things is to take a pause. I think the board on the whole needs to take a pause on this.”

Not everyone is pleased about the prospect of there no longer being a local police force, which is a service not all communities enjoy. That’s why some community members from the village and town formed the Save the Millerton Police Department Facebook Group.

The group has even gone as far as getting hundreds of lawn signs made, which may be ordered by contacting the group via its Facebook page or by emailing Brian Wahl at savethemillertonpd@gmail.com. Signs promoting the group have been posted throughout the community.

The signs started popping up around the Memorial Day holiday on May 30.

Najdek has said one of the main reasons for wanting to do away with the MPD is due to the enormous concerns about liability if anything goes wrong while a police officer is on duty.

At this time, the village is already involved with three lawsuits. Potentially, the mayor said, if there were a costly lawsuit involving a police incident gone wrong it could bankrupt the village.

If Millerton decides to contract with the DCSO, the sheriff’s office would take on all of that liability, removing “100%” of the worry from the village, said the mayor.

MPD Officer-in-Charge Mike Veeder said on Wednesday, June 15, he and his force are very appreciative of those in Millerton trying to save the department.

“We love the support, we’re very, very blessed to have all the support we have from the community,” he said. “There’s a great deal of support for us and we appreciate [it].”

As far as what he learned from the public hearing process when the Village Board was trying to get Local Law A approved, Veeder described it as a learning process.

“There were things brought up that we can do better,” he said, adding if Local Law B gets pushed through and the board leans toward abolishing the MPD yet again, the officers might make a plan of their own. “We’re ready for a petition — we have it — and if that’s the way the board wants to go, we’ll do it.”

Some of the Save the MPD lawn signs posted have recently been reported stolen. Though there’s no word on who’s responsible for the thefts, word of the stolen signs has made it to Village Hall and to the MPD, according to the Facebook group.

Najdek said she saw the group posted about the thefts on Facebook but didn’t know any more about it. Other than that, she said she preferred not to comment on the group’s campaign to save the MPD, other than to say that “Everyone is entitled to their opinion.”

The mayor added, “One of things that the village realizes in the village narrative, and we talked about this publicly, is we have not come out with our executive summary of this process yet, and that’s something that has to be worked out.”

If the village decides to contract with the DCSO and abolish its part-time force, the service would be in addition to the county-wide coverage the sheriff’s office already provides to all 22 towns and villages throughout Dutchess 24/7/365. Millerton/North East are included in its Zone 6.

Millerton/North East are also provided coverage by the New York State Police (NYSP) Troop K out of Salt Point 24/7/365. Both services are paid for through taxes.

Public vote will be needed

As the village attorney explained on May 24, Local Law B is subject to a mandatory referendum and contains language that it shall be voted on at a special election.

At this point of the year, Polidoro said that it would have to be done during a special election because it will be too late for the village’s general election, which was held on Tuesday, June 21, from noon to 9 p.m. at the Village Offices at 5933 North Elm Ave. (Route 22). Yet it’s too far from the General Election coming in November.